The New York Giants used the No. 10 overall pick in last year’s draft on former Ohio State star Eli Apple, and you have to wonder if they regret that decision.

Apple has had a tumultuous season with the Giants this year. He seemingly had problems with former head coach Ben McAdoo, and that may have spilled over with interim coach Steve Spagnuolo. On Sunday, Apple was inactive for his fourth consecutive game. He still managed to make headlines, however, as he sent a couple of tweets during the game, one of which praised former Ohio State teammate Rod Smith for scoring an 81-yard touchdown. Smith was one of New York’s opponents that day, as the tweets came during a 30-10 blowout loss to the Dallas Cowboys.

On Monday, Spagnuolo said he was “disappointed” in Apple.

“I had a conversation with Eli about that. I was disappointed,” the coach said, via Jordan Raanan of ESPN.com. “I told him I was disappointed. We’ll decide exactly what we do with it. He apologized. We move on from that.”

Apple has been going through some personal issues off the field, as his mother recently underwent brain surgery. However, there have been reports that he is not getting along with the Giants’ coaching staff, and he is said to have stormed out of a film session and threatened to walk out on the team after his play was criticized recently. Apple has been inactive for four straight games, and Spagnuolo said the most recent was a result of the 22-year-old not getting enough reps in practice.

According to Raanan, Apple is not in good standing with the Giants. One source told the reporter Apple is “disliked” within the organization, with another describing the young defensive back as “being in the doghouse.”

It’s tough to judge Apple during a season in which the Giants have been horrible and multiple players have faced internal discipline, but there’s no denying his pro career has been a disappointment early on.

Eli Apple reportedly threatened to walk out on Giants after criticism

Eli Apple has had a rough year with the New York Giants. He’s come off the bench for several games, and he missed the last two contests. The team said that Apple missed the Week 11 and 12 games because of personal reasons — he was with his mother as she recovered from brain surgery. That is true, but the New York Post reports that Apple has been going through some other issues with the team.

The Post’s Paul Schwartz says Apple has been going through a tough time after he was taken apart in a film session following the team’s loss to the San Francisco 49ers. The cornerback heard it hard from his teammates over his poor effort and reportedly threatened to walk out of the team’s facility. He didn’t do that after meeting with Ben McAdoo, but he did not report to the team’s practices the next two days because he was with his mom.

Apple was the No. 10 pick by the Giants out of Ohio State in 2016, and there were questions about how highly the Giants had taken him. Schwartz makes it sound like Apple wasn’t even the team’s preferred draft choice.

Eli Apple: Giants not pressuring me to silence my mom

Eli Apple disputed his mom’s belief that the New York Giants are pressuring him to silence his mother from speaking out.

Apple is a rookie cornerback for the Giants, and his mother, Annie, has become quite a personality thanks to her active Twitter account. Annie Apple was an outspoken critic against the Giants for their handling of Josh Brown, and specifically revealed that she was a domestic violence victim, which is why the issue hits her particularly hard.

In a column for SI this week, Annie shared her feeling that the Giants might have been leaning on her son to silence her.

“But I was livid with the Giants, not just because of John Mara’s comments but I was disappointed in the organization because I felt they were leaning heavily on a 21-year-old kid in an effort to control what his mother says. That’s not fair,” Annie Apple wrote.

On Thursday, Eli was asked about his mother’s belief that the Giants are silencing him. He said that was not the case.

“She was a little bit upset and I didn’t have a chance to really talk to her, and I guess throughout that whole thing that’s just how she felt, but I never had a chance to talk to her or anything, so maybe that’s just an assumption of hers that she just felt in her gut,” Eli Apple said Thursday via the New York Daily News. “But it’s definitely false. Nobody’s leaning on me or anything telling me things to tell her. It’s not like that at all. I think the Giants are a class organization, and I’m just happy to be here.”

It’s important to be clear that Annie Apple did not say it was definitive that the Giants were leaning on Eli, but just her feeling. If Eli said anything to her, it could have been on his own simply because her criticism puts him in an awkward spot around his teammates and the front office.

Apple, the No. 10 pick in the draft, has 15 tackles and three passes defended this season.

Here’s what Annie Apple tweeted just days after her son was taken No. 10 overall by the New York Giants on Thursday:

Praying for all the thirsty girls sliding in new NFL rookies DMs with heavy booty & cleavage action pics. Only Jesus can quench your thirst

Athletes need to watch what they tweet, because they never know what may come back to haunt them. Eli Apple could tell you something about that.

Apple, a redshirt sophomore from Ohio State, was selected No. 10 overall in Thursday’s NFL Draft by the New York Giants. While getting picked so high was a great break for Apple especially after the character criticism he endured this week, he might have a little making up to do.

Before the NFL, and even before he was a student-athlete at Ohio State, Apple once trolled Giants fans after the team lost to the Falcons 34-0 in 2012: 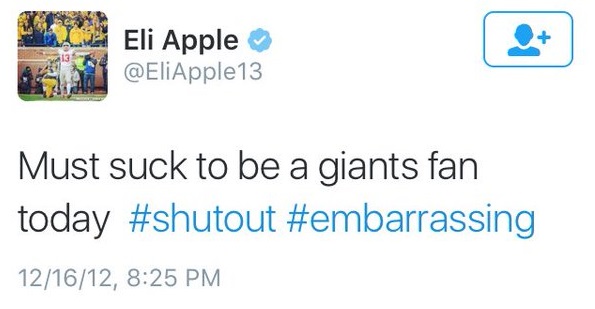 Must suck to be a giants fan today #shutout #embarrassing

Hopefully Giants fans will be able to forgive him. And, hey, it could have been much worse. Remember this awkward draft moment? Eli Apple was defended by ex-teammates and even his mother against a seemingly personal attack against him.

Each year, the Milwaukee Journal Sentinel’s Bob McGinn produces long pieces on NFL prospects ahead of the draft, complete with comments from scouts on each player. On Tuesday he published his rankings of the defensive back prospects, and Apple was listed third. One scout apparently isn’t a fan of Apple and had some criticism of the 20-year-old former Ohio State CB.

“I worry about him because of off-the-field issues,” one scout told McGinn. “The kid has no life skills. At all. Can’t cook. Just a baby. He’s not first round for me. He scares me to death.”

Two scouts commented on Apple’s age and indicated they felt the third-year sophomore was coming out too early. But it was the cooking comment that left most scratching their heads wondering what that had to do with Apple’s football ability.

Eli has made me some fire fried chicken and mac and cheese. The source seems to be pretty unreliable

I can't cook either ! Maybe hot pockets at best lol .. And I'm a SUPERBOWL CHAMPION .

Btw, Eli's dad is a retired five star chef. We eat well. So stop playing with our name. Next time you say our name, put some respeck on it

Apple himself then weighed in:

Glad to know someone appreciates my cooking ? https://t.co/wDh84JMR1T

Eli Apple on his maligned cooking: "I used to cook for my teammates any time they came over. It was good stuff! Nobody ever complained."

Eli Apple's culinary thoughts, continued: "I'm more of a breakfast guy, though. Come by in the morning, and I'll hook you up."

Apple has had a rough go of it leading up to the draft. Not only was accused of having no life skills and not being able to cook, but he was also asked this personal question by one team. He is still expected to be selected pretty high in the draft.

The Atlanta Falcons apologized on Friday after one of their coaches asked an NFL draft prospect if he liked men during an NFL combine interview.

Ohio State cornerback Eli Apple, regarded as a potential mid-to-late first rounder, told Comcast SportsNet’s Breakfast on Broad on Friday that this was the starting topic during an interview with a Falcons coach.

“The Falcons coach, one of the coaches, was like, ‘So do you like men?’ It was like the first thing he asked me,” Apple said. “It was weird. I was just like, ‘no.’ He was like, ‘if you’re going to come to Atlanta, sometimes that’s how it is around here, you’re going to have to get used to it.’ I guess he was joking but they just ask most of these questions to see how you’re going to react.”

“I am really disappointed in the question that was asked by one of our coaches,” Quinn said. “I have spoken to the coach that interviewed Eli Apple and explained to him how inappropriate and unprofessional this was. I have reiterated this to the entire coaching staff and I want to apologize to Eli for this even coming up. This is not what the Atlanta Falcons are about and it is not how we are going to conduct ourselves.”

This goes rather beyond wildly inappropriate. Prospects get asked a lot of questions at the combine, many of them weird, but generally they’re the stupid and harmless sort of weird. This is just uncomfortable and uncalled for, and the coach responsible for it deserves more than just a firm talking to and a prepared apology.