The Atlanta Braves on Tuesday clinched the NL East to cap an impressive comeback, and one of the franchise’s legends couldn’t resist gloating.

The Braves trailed the New York Mets by 10.5 games in the division when June began. Undeterred, the Braves played great ball to chase down the Mets and clinch the division.

Greg Maddux, who won the NL East 10 times while playing for the Braves, loved what he saw.

Even after 2 decades it’s still nice to see the @Braves beat the @NewYorkMets. Congrats Atlanta!

“Even after 2 decades it’s still nice to see the @Braves beat the @NewYorkMets. Congrats Atlanta!” Maddux tweeted on Tuesday night.

The “after 2 decades” likely refers to when Maddux last played for the Braves, which was 2003. Maddux played for four MLB teams during his 23-year Hall of Fame career, but he is most strongly remembered for his dominant time in Atlanta. Apparently those Atlanta ties still weigh strongly for him too.

It’s hard not to be impressed with the way the Braves finished the season to clinch their fifth straight division title. The Braves went 21-6 in June and won 18 games apiece in July, August and September. They capped it all off by sweeping the Mets over the weekend to take a 2-game lead in the division.

Joey Gallo has established himself as one of the big sluggers in MLB.

Gallo had an interview with MLB Network this week and talked about the time he took Greg Maddux’s daughter to prom. What makes the story even cooler is that Gallo also had a game earlier the same day and pitched a no-hitter.

“It was pretty intimidating, I’m not going to lie,” Gallo told MLB Network about taking Maddux’s daughter to prom. “We actually had a game earlier that day and I pitched, and I threw a no-hitter that day. And I ended up going to prom later that night with Paige Maddux. So it was an interesting day, it was really fun.

“Showing up and having to talk to Greg for 20 minutes before taking his daughter to prom was pretty nerve-racking for a 17-year-old.”

Gallo played high school ball at Bishop Gorman in Las Vegas. He was then drafted No. 39 overall in 2012 by the Rangers. He has remained with them since and shown off his great power, but his .208 career average leaves a lot to be desired.

Showing up to pick up a Hall of Famer’s daughter for prom? That has to be intimidating. You don’t want to mess with Mad Dog, especially with some of the stories we’ve heard about him.

Here is a recent photo Paige shared of her family. 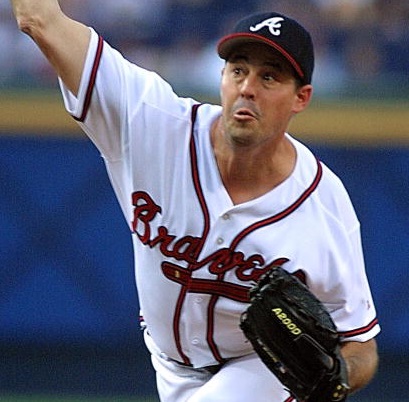 We all know respected Major League pitchers who have been around the game for years are more apt to get the benefit of the doubt with borderline calls. But what about umpires telling pitchers what pitch to throw? Maybe that’s just a Greg Maddux thing.

In his book “Leo Mazzone’s Tales From the Braves Mound,” former Atlanta Braves pitching coach Leo Mazzone told an interesting aside about the time Maddux solicited advice from an umpire on how to get a hitter out — in the middle of an at-bat:

Another time, (Maddux) had the bases loaded in Philadelphia, two out. Jerry Crawford was the second base umpire and he was set up behind the mound. I saw Maddux turn around and talk to Crawford, nod his head, come back, throw a pitch, strike the guy out. He came in and I asked what he and Crawford were talking about. He said, “Well, I just went back off the mound and told Jerry, ‘I don’t know whether to throw this guy a fastball or a change-up. What do you think?’ He said he’d throw a change-up. So I threw him a change-up and struck him out.”

Maddux, a first-ballot Hall of Famer, won four consecutive Cy Young Awards from 1992 to 1995. He was one of the best control pitchers to ever play. The guy won 355 games and struck out 3,371 batters in his 23-year career, so he didn’t exactly need advice from anyone in the middle of a game.

That said, it obviously didn’t hurt in that particular situation. If anyone had earned the right to seek advice from an umpire in the middle of a game, it was Maddux.

Greg Maddux once had an awesome Tony Gwynn quote 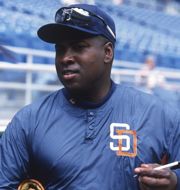 The baseball world was mourning the passing of one of its most beloved players on Monday, as San Diego Padres legend Tony Gwynn lost his battle with cancer at the age of 54. Gwynn, a Hall of Famer and 15-time All Star, is one of the greatest pure hitters to ever play the game. Greg Maddux got to see that firsthand.

In fact, Maddux saw Gwynn more than anyone. The former Atlanta Braves hurler faced Gwynn 107 times during their overlapping Hall-of-Fame careers. Maddux didn’t strike Gwynn out a single time — NOT ONCE.

And Maddux knew it. On Monday, ESPN’s Ethan Strauss reminded us about a fantastic quote that Maddux once had about Gwynn that summed up his sensational career. The righthander was discussing how changing speeds and having control are far more important than velocity, because no hitter can tell the exact speed of a pitch. Well, except one…

“You just can’t do it,” Maddux said. “Sometimes hitters can pick up differences in spin. They can identify pitches if there are different release points or if a curveball starts with an upward hump as it leaves the pitcher’s hand. But if a pitcher can change speeds, every hitter is helpless, limited by human vision.

“Except for that (expletive) Tony Gwynn.”

If that’s not respect, I don’t know what is.

We could spend all day listing Gwynn’s mind-boggling career achievements. He was that good. Maddux summed it up perfectly.

Greg Maddux not going into Hall of Fame as Atlanta Brave

Greg Maddux’s Hall of Fame plaque will not have an Atlanta Braves logo on it because the pitching great did not want to disrespect the time he spent with the Chicago Cubs.

The Baseball Hall of Fame announced on Thursday what team’s logo would go on the cap that appears on the plaque of each member of the 2014 class, and it was revealed that Maddux has chosen not to have a logo. Here’s the statement he provided to explain his decision.

“My wife Kathy and I grew up in baseball in Chicago, and then we had just an amazing experience in Atlanta with the Braves. It’s impossible for me to choose one of those teams for my Hall of Fame plaque, as the fans of both clubs in each of those cities were so wonderful. I can’t think of having my Hall of Fame induction without support of both of those fan bases, so, for that reason, the cap on my Hall of Fame plaque will not feature a logo.”

Look, that’s a nice statement and all, and I can appreciate Maddux’s ties to Chicago, but this dude needs to go in as a Brave. I don’t think anyone out there thinks of Maddux as a Cub, but everyone knows him for what he did in the prime of his career from 1993-2003 teaming with John Smoltz, Tom Glavine and Steve Avery (and Denny Neagle or Kevin Millwood and others at times) to form one of the best and most memorable rotations in baseball history.

The 1990s Braves were one of the most memorable groups in baseball history. Maddux was the face of those teams. 194 of his 355 wins and 363 of his 740 starts came with the Braves. He won three of his four Cy Young Awards while with Atlanta. He won almost 50 percent more games with the Braves than the Cubs (he had 133 wins and 298 starts with Chicago over two separate stints).

Maddux is an Atlanta Brave through and through, and he shouldn’t view choosing the Braves to represent him as a slight to Chicago. It’s just a reflection of where he had his most notable accomplishments as a player.

The one thing I wonder is if there’s some bad blood between Maddux and Atlanta. Did something happen in 2004 when he choose to sign with the Cubs in free agency instead of remaining with Atlanta? That could explain things.

Greg Maddux Was Quite the Pisser

Last time a Hall of Fame pitcher retired, I wrote him quite the eulogy. Greg Maddux is incomparably better than Mike Mussina, but everyone already knows that. What more is there to say about Maddux as a pitcher? The guy was incredible during the 90s and defined the finesse style. His defense was remarkable, he struggled in the playoffs, hung on late when his skills diminished, but he was incredible from about ’88-’02 and truly amazing in the mid-90s. He did things (like win 355 games) that nobody else will do unless rules change. But why talk about the things everyone can agree on? Why not talk about the lesser-known facts about Maddux? That’s what I’d prefer to do on the day he retires. For instance, did you know about Greg Maddux the practical joker? The guy that would pee on rookies in the shower? Did you know he would also piss in the hot tub? From David O’Brien of the AJC via my boys at Fanhouse:

I could tell you about how he (allegedly) urinated in the hot tub when he was a young Cubs pitcher, that story told to me years ago by Andre Dawson, who was in the big tub with a couple of other Cubs veterans when young Maddux informed them that he’d relieved himself in it a few minutes earlier.

I tell you, you look at the guy and you would never suspect a thing. If that’s how Maddux wanted to come across — as a nerdy professor — he sure succeeded, because I don’t think anyone would guess he’s one of the biggest practical jokers in the game. You remember Greg Maddux as the dominant pitcher, I’ll remember him as the great pisser.