Columbus Blue Jackets defenseman Jack Johnson filed for bankruptcy before the start of the 2014-2015 season. Johnson, who will earn $5 million this season and has made roughly $18 million during his nine-year NHL career, has spent almost all of his money and is still in debt.

Would you believe that the 27-year-old’s parents led him to the poor house?

“I’d say I picked the wrong people who led me down the wrong path,” Johnson told The Columbus Dispatch last week. “I’ve got people in place who are going to fix everything now. It’s something I should have done a long time ago.”

While he would not comment further, Aaron Portzline of The Dispatch reports that Johnson’s own parents, Jack Sr. and Tina Johnson, contributed to their son’s financial downfall.

Johnson has not had an agent since he parted ways with Pat Brisson, who represents some of the biggest stars in the NHL, back in 2008. Before he signed a seven-year, $30.5 million contract with the Los Angeles Kings in 2011, Johnson signed over power of attorney that granted his mother full control of his finances.

Maybe he shouldn’t have.

According to The Dispatch, Johnson’s mother Tina borrowed at least $15 million in Jack’s name against his future earnings. She took out as many as 18 high-interest loans, most of which were defaulted on.

Johnson’s parents allegedly bought all kinds of fun stuff with the loans, including cars for themselves and a Manhattan Beach property that court documents claim Johnson didn’t even know about. Since all of the loans were in Johnson’s name, he has been sued at least six times for defaulting.

The entire story is very interesting and worth a read. We have heard of athletes blowing their money on countless occasions, but aren’t your parents supposed to be some of the few people you can trust? That’s pretty rough. 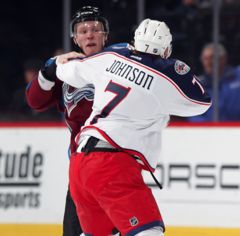 When the Blue Jackets signed winger Jeff Carter this past offseason, Columbus fans had plenty of reason to be excited. Carter was supposed to give them a perennial 30-goal scorer to play alongside Rick Nash and anchor one of the better lines in hockey for years to come. The marriage lasted only 39 games, with Carter becoming a malcontent and forcing his way out of town. Eventually, the Blue Jackets brought in defenseman Jack Johnson to overtake the No. 7 jersey Carter had vacated.

On Thursday, the Blue Jackets announced a plan to rescue fans from the Carter jerseys they purchased this season.

END_OF_DOCUMENT_TOKEN_TO_BE_REPLACED The Kings beat the Caps 5-2 at Staples Center Monday night, but the real highlight came in the second period when defenseman Jack Johnson Tebowed after scoring his sixth goal of the season. Here’s a video of Johnson’s goal and celebration, along with an explanation of why he decided to Tebow: