Ja’Marr Chase has struggled with drops in his first NFL season, but we probably won’t see any that are more costly than the one he had on Sunday.

Chase committed a brutal drop during the first quarter of Cincinnati’s game against the Los Angeles Chargers. The star wide receiver burned defensive back Michael Davis for what should have been a 61-yard touchdown. Instead, the ball bounced off Chase’s hands and Davis came away with it.

What concentration by Michael Davis on the INT! #BoltUp

Although it happened early in the game, the play was a huge momentum-shifter. The Bengals were trailing 9-0 and had converted a huge 3rd-and-14 from deep in their own territory on the previous play. They should have had a touchdown to cut the lead to 9-7, but instead the Chargers were handed an interception. L.A. then scored to take a 16-0 lead on the ensuing drive.

Chase had a pretty animated response to people who were concerned about his drops early in the year, but that blunder is not going to help his case. 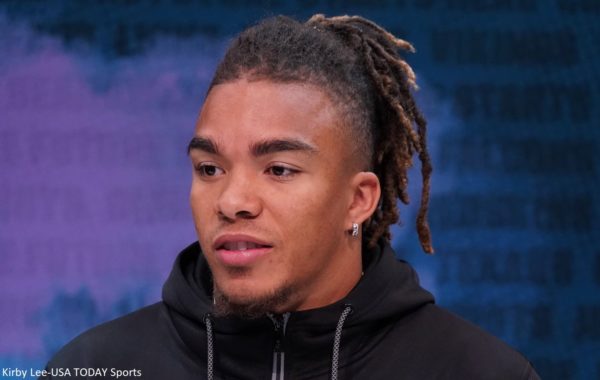 Cincinnati Bengals wide receiver Ja’Marr Chase may be taking the league by storm, but he’s really trying to get the attention of one of his favorite players.

Chase’s Bengals faced off against the Green Bay Packers in Week 5, a 25-22 Cincinnati loss in overtime. Chase admitted Wednesday that he had asked Green Bay wide receiver Davante Adams for his jersey after that game, but had never received one.

Chase: "I hope he sees this. Can I please have the jersey, please?"

Chase and Adams had an epic duel in their head-to-head matchup. Adams edged it with 11 catches for 206 yards and a touchdown compared to Chase’s six grabs for 159 yards.

Chase is well on his way to a 1,000-yard season as a rookie, and his 20.7 yards per catch leads the NFL. You’d think that would get Adams’ attention, but maybe Chase still has more work to do.

Cincinnati Bengals wide receiver Ja’Marr Chase struggled with drops in the preseason, but those mistakes did not carry over in his first ever regular season game. It doesn’t sound like the rookie expects that to change, either.

Chase had just one catch and four dropped passes during the preseason, according to Pro Football Focus. He then caught five balls and did not have a drop in Sunday’s win over the Minnesota Vikings. In an appearance on NFL Network’s “Good Morning Football” on Wednesday, Chase was asked if he had anything to say to those who were worried about his slippery fingers.

.@Bengals WR Ja'Marr Chase on @gmfb @nflnetwork on what he would tell critics concerned over his drops in the preseason: "I like to tell them enjoy the show. This is my job. Let them sit back and enjoy the show." #WhoDey

Chase is expected to have a huge impact this season, which is why many were surprised to see him struggle during the preseason. Fortunately, it was the preseason. None of that matters going forward.

Last year, the Cincinnati Bengals made Joe Burrow the No. 1 pick in the NFL Draft. This year, the Bengals used the No. 5 overall pick to give Burrow a familiar weapon — his former LSU teammate, Ja’Marr Chase.

In LSU’s 2019 national championship season, Chase had 84 catches for 1,780 yards and 20 touchdowns. In his NFL debut on Sunday, Chase had five catches for 101 yards and a touchdown. The bomb he caught from Burrow against the Minnesota Vikings for his first career NFL touchdown looked awfully familiar to LSU fans.

The LSU Football Twitter account even made a great video out of it that went viral. Take a look:

That sure was awesome. It was like looking at the same play.

The Bengals no doubt incorporated some of the successful plays LSU ran and added them to their playbook.

If he can keep making plays like that, Chase will put the drops talk to rest. Chase, the Cincinnati Bengals’ first-round pick, made a rather innocuous tweet Friday in which he seemed to predict a win over the Vikings in the regular season opener Sunday.

There’s not much to this tweet, but Boyd certainly took note and delivered a pretty brutal response referencing a famous “Chappelle’s Show” sketch.

This should spice things up a bit for Sunday’s game. After all, it will be Chase’s first regular season appearance, and Boyd is going to want to show the rookie just how tough the league is.

Chase is already facing some pressure thanks to an underwhelming preseason. The Vikings are going to be happy to put him under more with this kind of trash talk.

Ja’Marr Chase has worrying quote about his preseason

Ja’Marr Chase didn’t have a great preseason with the Cincinnati Bengals, and it sounds like he knows it.

Chase struggled with drop issues in both practices and preseason games. The Bengals have backed him, but Chase admitted Monday that his preseason left him feeling somewhat unfulfilled.

Chase had opportunities during preseason, but his drops were a big enough issue that coach Zac Taylor had to offer a public vote of confidence. As long as it doesn’t continue into the regular season, it will be quickly forgotten. If the drops keep coming, Chase is going to face further scrutiny.

Ja’Marr Chase has had fairly significant issues with drops during the preseason, and that came up again during Sunday’s preseason game.

Chase was the target of a bubble screen from Bengals quarterback Joe Burrow, with the pass going right through Chase’s hands. It’s been an ongoing issue for the rookie wide receiver, who has struggled with drops in game action and in certain practices in recent weeks.

Burrow came to Chase’s defense after the game, saying he remains confident in the wide receiver to be ready to go.

Joe Burrow on Ja'Marr Chase dropping his one target:

"I'm not worried about it. I know the kind of guy and player Ja'Marr (Chase) is."

Said he's confident Ja'Marr will be ready to go week one. #Bengals @fox19

Burrow and Chase know each other well, having played together at LSU. Chase’s talent isn’t in doubt, and this seems like more of a mental issue at the moment. Burrow has had his own issues during camp, and they haven’t fazed the quarterback. Chase can probably take some inspiration from that.

Ja’Marr Chase is facing some troubling allegations from a woman who claims she is pregnant with the rookie wide receiver’s baby.

Model Ambar Nicole posted some concerning content on her Instagram story on Tuesday in which she appeared to accuse Chase of assaulting her. Nicole tagged Chase in one comment that said “putting your hands on a pregnant female is lame AF!!!” She later deleted the story, but you can see screenshots below. Beware that one contains a curse word.

Nicole is the same woman who blasted Chase on Instagram last month and claimed the Cincinnati Bengals wide receiver impregnated her. She shared a screenshot of a text message conversation that she said she had with Chase, in which Chase allegedly told her that the baby isn’t his and that she she “go take a plan B.” Black Sports Online captured the posts before they were deleted.

Chase appeared to respond to the July allegations and claim they came from a “fake” Instagram account.

these fake pages be killing me bruh

While we haven’t heard Chase’s side of the story, the allegations are serious enough that the NFL will almost certainly look into them.

Chase was drafted by the Bengals with the fifth overall pick in this year. He and former LSU teammate Joe Burrow are hoping to recreate the magic they made with the Tigers, though they do not appear to be off to the best start.

Ja’Marr Chase put in a discouraging performance Friday during the Cincinnati Bengals’ preseason game against the Washington Football Team. It was enough to prompt his coach to call for improvement, but not enough to panic yet.

Chase was responsible for three drops on Friday, all of them coming on third down. That prompted questions about Chase’s performance so far in Bengals camp, leading coach Zac Taylor to downplay the issue.

“We just have to keep working on it,” Taylor said, via Geoff Hobson of the team’s official website. “It’s key our receivers do a great job focusing on catching the ball. He’s getting better every day in a lot of the other details that maybe go unnoticed. We’ll just keep looking for improvement there.”

Chase has struggled with drops during camp, but it’s worth remembering he hasn’t played in over a year. He also hasn’t had a lot of time to get used to working with quarterback Brandon Allen, who started Friday’s game. Add in the fact that the quarterback he’s more familiar with is also struggling and the slow start is more understandable. If the problem lingers too far into the regular season, that will be more cause for concern.

Joe Burrow lobbied hard for the Cincinnati Bengals to select his former college teammate Ja’Marr Chase in the NFL Draft. After they did so, the quarterback isn’t shying away from hyping up their connection.

Burrow and Chase took extra reps together during OTAs and minicamp, and the quarterback said his connection with Chase was “right back to where it was” when the two played together at LSU. Burrow also wasn’t shy about saying that he’d made clear to teammates how good Chase would be.

“Everybody’s been surprised by how smart he was and I told everyone coming in, ‘he’s not going to bust, he’s going to know exactly what to do, he’s going to be a pro,’ and that’s exactly what’s happened. He’s super smooth on the field,” Burrow said of Chase, via Tyler Dragon of the Cincinnati Enquirer.

“It doesn’t look like he’s going super hard and guys are coming to me and saying is he going hard? Then we go up against the defense and he looks exactly the same and he’s doing the same, but he’s just at a different speed than everybody else. He’s going to be great for us and he’s a great friend as well.”

Burrow has been ecstatic about the Chase pick since it was made. He clearly envisions the two becoming one of the most dangerous quarterback-receiver combinations in the NFL. The Bengals want that too, and it sounds like the early signs are very good.