Dallas Cowboys owner Jerry Jones essentially blasted the team’s coaches after Sunday’s loss to the New England Patriots, but it doesn’t sound like it’s having any impact on the players.

Jones said after Sunday’s loss that the coaching had not been good enough, and that he “shouldn’t be this frustrated” considering the “makeup” of the team. Longtime Cowboy Jason Witten, who has been associated with the organization since 2003, essentially backed Jones’ assertions.

“Passion, emotion, the energy he brings, that is Line 1 for Mr. Jones, I feel like from my perspective,” Witten said Tuesday, via Todd Archer of ESPN. “He wants to win. He expects to win. He feels like he’s put a great team together, which he has, and we haven’t played to our expectations of where we should be. That’s completely fair. I think it’s just the raw emotion of it all. He’s been around a lot of great football and knows what he wants it to look like.”

The Cowboys are 6-5 and only hold down a playoff spot at the moment because they lead a mediocre NFC East. Jones, who has a Super Bowl or bust mentality, is understandably furious. That has lame duck coach Jason Garrett coaching for his job. The criticism might put the players in a tough spot, since they’ll be directly asked about criticism of their coaches from the top, but Witten is diplomatic while admitting that the Cowboys just haven’t been good enough.

Jason Witten not on Cowboys to be a ‘cheerleader’

Jason Witten made very clear on Friday what his intended role and purpose on the Dallas Cowboys is.

Witten retired from the NFL last year and spent the season as a broadcaster on “Monday Night Football.” His transition to the booth did not go well, so the tight end announced in late February that he would return to what he does best.

Witten, who is part of the Cowboys’ training camp in Oxnard, Calif., doesn’t want anyone thinking that just because he had previously retired he has no business being back on a football field. He made clear that he is there to make plays and help the team win games.

Jason Witten: “I’m just an old guy trying to make a play here and there. … This isn’t just to come out here to be a cheerleader and kind of ride off into the sunset, it’s to help this team win games.”

This season will be Witten’s 16th with the Cowboys. In 2017, he caught 63 passes for 560 yards and five touchdowns. Based on what everyone is saying about Witten, we would expect him to be a solid contributor for the team.

Jason Witten and Dak Prescott spent two years together on the Dallas Cowboys before Witten’s short-lived retirement. It has, however, given Witten time away, and a different view of Prescott’s personal development.

On Wednesday, Witten had nothing but praise for Prescott, stating that the quarterback had improved since he last threw to Witten in 2017.

Jason Witten said today that Dak Prescott has had “a hell of a camp” this spring. When asked why, he said Dak’s accuracy and anticipation have improved dramatically from before he retired. #cowboyswire pic.twitter.com/NXcwFDg6rC

Witten played with Prescott during the quarterback’s impressive rookie season, in which he led Dallas to 13 wins. The tight end would be quite familiar with Witten’s development.

The feeling is mutual, as Prescott has said very similar things about Witten. If they’re both right, the Dallas offense could be an explosive unit in 2019, but training camp hasn’t even started yet and it’s still early. Can a year away from football make you even better? One Dallas Cowboys player seems to think that’s happened to Jason Witten.

Witten, who spent a year in the Monday Night Football broadcast booth before returning to the Cowboys, is getting rave reviews from those working with him during the offseason. That now includes Dak Prescott, who thinks Witten has actually improved now from where he was upon retirement.

Dak Prescott on Jason Witten: "I guess the trick is to take a year off because he's definitely gotten better, stronger and faster. He hasn't lost a step."

It’s a very similar review to the one he got from his head coach. There are no tempering expectations here — if the Cowboys are to be believed, Witten is going to be a big part of the offense, and already seems to be getting back up to speed.

Jason Witten’s year off of football apparently did not negatively affect him.

Dallas Cowboys head coach Jason Garrett attended the team’s annual “Taste of the Cowboys” to benefit the North Texas Food Bank. According to Cowboys reporter Rob Phillips, Garrett said Witten has looked good during the team’s voluntary offseason program and looks like the same player before his retirement.

Witten retired after the 2017 season and was hired by ESPN to serve as an analyst on “Monday Night Football.” His transition to broadcasting did not go well and was magnified by ex-teammate Tony Romo’s ascendance in the same capacity. After a season of criticism as a broadcaster, the tight end announced in late February he would return to the Cowboys.

Garrett praising Witten as a player is not too surprising considering he was trying to convince the veteran to un-retire all last season.

Jason Witten decided earlier this offseason to leave the “Monday Night Football” broadcast booth and return to playing for the Dallas Cowboys, but ESPN is not planning to replace him with another on-air personality — at least in the short-term.

On Wednesday, ESPN announced that Booger McFarland will join Joe Tessitore inside the broadcast booth next season. McFarland spent the 2018 season as a third analyst for the network and worked from a booth on the sidelines.

ESPN pursued Peyton Manning to replace Witten, and they probably would have let the former quarterback name his price. However, Manning is not interested in pursuing a career in broadcasting at this time. If and when he does, ESPN will have to compete with every major network to sign him.

The “Monday Night Football” crew was heavily criticized last year, but most of that had to do with Witten’s embarrassing gaffes. It’s no surprise ESPN is going to ride things out with what they have for the time being, though will change in 2020 if it doesn’t work out.

Jason Witten is making big changes this year, and that includes his hair.

Witten decided to give up broadcasting for now to return to the NFL. He is being inducted into the Texas Sports Hall of Fame and showed up with a new look when he spoke with the media on Saturday.

“Maybe there’s something still inside left to go after a championship” Jason Witten #Cowboys pic.twitter.com/N6E7LOcCg5

What makes this significant? As Charles Barkley would say, Witten finally decided to come on home.

The tight end had thinning hair throughout the end of his NFL career and addressed it before debuting on “Monday Night Football.” This is how he looked less than a year ago:

He’s ditched whatever he was doing before and has gone natural, embracing his new look. We commend him for that and for feeling confident about his style. There’s no shame in losing one’s hair — it happens to the best of us. It’s just surprising to see him embrace this look considering we know just how sensitive of a topic it’s been for him. 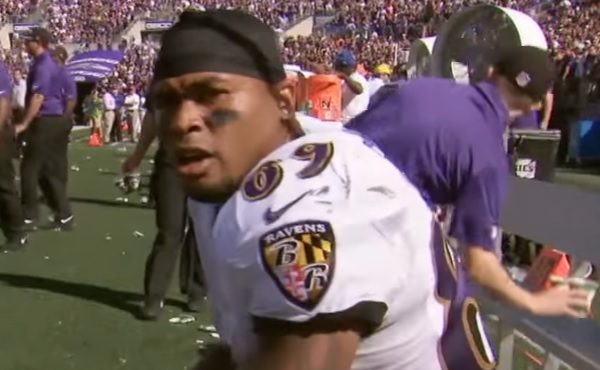 Jason Witten’s somewhat iffy one-year tenure in the Monday Night Football booth ended last week when he decided to return to the Dallas Cowboys for 2019. So are any other players-turned-broadcasters ready to get back on the field?

NFL Network’s Steve Smith, one of the finest wide receivers of his era, has no plans to follow Witten back into the game. His reason is simple: he’s good at his job.

To say that Witten was unpopular and gaffe-prone as a broadcaster would be understating things. Smith has no such issue. Not only is he popular as a TV personality, but he’s even outlined the efforts he’s gone to in order to ensure that he doesn’t get the urge to play again. When he’s dropping one-liners like that, why would he?

Jason Witten retired from football last year so he could pursue a career in broadcasting, and the 11-time Pro Bowler apparently regretted the decision.

On Thursday, the Dallas Cowboys announced that Witten will leave the “Monday Night Football” broadcast booth to re-join the team in 2019.

“The fire inside of me to compete and play this game is just burning too strong,” Witten said in a statement. “This team has a great group of rising young stars, and I want to help them make a run at a championship. This was completely my decision, and I am very comfortable with it. I’m looking forward to getting back in the dirt.”

The 2019 season will be Witten’s 16th with the Cowboys. The 36-year-old was still a major contributor in 2017, catching 63 passes for 560 yards and five touchdowns. Assuming he has stayed in shape, he should have no problem sliding right back into his old role with the Dallas offense.

Witten was heavily criticized for some of the flubs he had during his first season in the broadcast booth, so you have to wonder if that factored into his decision to return to the field. The 2019 edition of the Pro Bowl ended with an AFC win and a trophy that wasn’t exactly in top condition.

The AFC won Sunday’s game 26-7, with the contest never being a very competitive one. Afterwards, ESPN’s Jason Witten was given the honor of presenting the trophy to offensive MVP and Patrick Mahomes and defensive MVP Jamal Adams.

Just one problem: Witten broke the trophy as he was lifting it.

Many people would say that this ten-second video sums up the Pro Bowl better than anything else possibly could.

Witten has had a lot of critics this season, and he made another gaffe during Sunday’s telecast. It’s fair to say this was, unfortunately, a fitting end to a difficult game and season for him as a broadcaster.