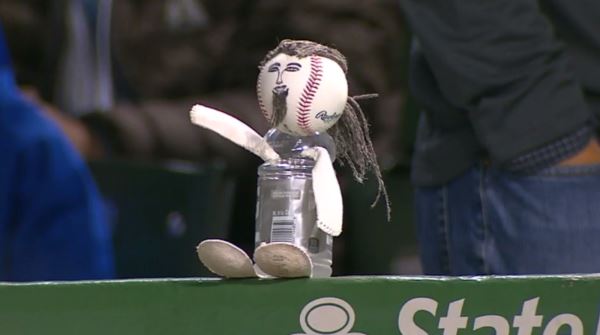 The Milwaukee Brewers had some fun with their division rivals Friday night.

During their game against the Chicago Cubs, the Brewers made a voodoo doll of Cubs infielder Javier Baez out of baseballs, a Gatorade bottle, and other assorted materials before placing it on top of their dugout. They eventually caught the attention of Baez himself, who got quite the kick out of the doll.

The Brewers would ultimately earn a 2-0 victory with Baez going 0-for-4 with a strikeout, so maybe they were onto something here. At the very least though, it was predictable that Baez, of all people, would be a good sport about it. The Chicago Cubs got a serious scare on Sunday when Javy Baez was kneed in the head on a slide, but the Cubs infielder appears to have escaped major injury.

Baez slid into second base headfirst on a pickoff attempt against the Atlanta Braves, and his head collided with Atlanta second baseman Ozzie Albies on the play. Baez tried to stay in the game, but could not do so.

CSN Chicago’s Tony Andracki reported after the game that Baez did not appear to be concussed, and a quick return sounded likely.

Javy was experiencing blurred vision after taking knee to eye area. Reports are positive at this time. Not in concussion protocol

Javy will stay behind in Chicago for further testing but Cubs expect him to fly to PIT Monday morning and hope he'll be ready to play.

Baez is known for his flashy slide moves, but this wasn’t his cleanest. It’s good that he appears to be alright.

The St. Louis Cardinals defeated the Chicago Cubs 4-3 in their season opener Sunday, and they may have received an assist from some signage in doing so.

Cubs second baseman Javier Baez was slow to react to a second inning ground ball off the bat of Aledmys Diaz. What should have been a double play ended up going to his left, allowing Dexter Fowler to go from first to third and setting up the first Cardinals run.

According to Baez, he didn’t see the ball until it was past the mound due to a white advertising sign behind home plate.

“I’m not afraid to make mistakes and when I make them there are no excuses, but I didn’t see the ball at all until it passed the mound,” Baez said, via Jesse Rogers of ESPN. “I realized it was the sign because he was getting out of the box and I still didn’t see the ball.”

We’ve heard of players losing balls in lights before, but a sign is a new one. It’s a valid excuse if it was in the wrong place at the wrong time, though.

Javier Baez defends playing with flair, says he will not change The Puerto Rican team at the World Baseball Classic drew both praise and criticism for their emotional, flashy style of play, and Javier Baez thinks everyone should remember that it’s only a game.

Baez said the game is about having fun, and said he wasn’t going to apologize for that.

“We do a great job playing and having fun out there,” Baez said, via Patrick Mooney of CSN Chicago. “That’s what it’s all about. This is a game. It’s not as serious as a lot of people take it. But, you know, everybody’s got their style and their talent. I have a lot of fun.

“It’s their choice to look at how we play, how excited we get. To us, it’s really huge what we did, even though we didn’t win. All of Puerto Rico got really together. We were going through a hard time over there and everything got fixed up for at least three weeks. Hopefully, they keep it like that.”

Baez said nobody from the Cubs has asked him to tone it down.

“No, not really,” Baez said. “Joe (Maddon) came to me last year about doing the routine plays and not (only) the great plays. That’s about it.

The WBC reignited the age-old debate about baseball’s culture clash, with the Puerto Ricans — and Baez, as you can see here — fell very much on the flair side. Javy Baez continues to do all the little things to make himself one of the most fun baseball players to watch.

Playing for Puerto Rico in the WBC on Monday night, Baez pulled off a stolen base by using an incredible swim move after diving into third:

Here it is in GIF form:

Puerto Rico was unable to drive him in after that, which is partly why the game went to extra innings where they won 4-3. Between this and his awesome tag earlier in the tournament, Baez has made some great plays.

Javy Baez celebrates out even before putting down tag

Javy Baez has quickly developed a reputation for having the fastest tag in baseball. That’s not the only part of him that works quickly.

During Puerto Rico’s WBC game against the Dominican Republic on Tuesday night, Baez started celebrating an out before it was made. Teammate Yadier Molina made a strong throw down to second to hose a runner, and Baez was giving him love before putting down the tag:

Javy Baez celebrating while putting the tag down. Love it. pic.twitter.com/tW0Q8MocSi

Nelson Cruz, what were you thinking? Power’s your game, buddy. Not speed. Chicago Cubs second baseman Javier Baez is having a stellar October, so it should come as no surprise that his magic continued on Saturday night as the NLCS got underway.

In the bottom of the second inning, Baez laced an RBI double to center off of Los Angeles Dodgers pitcher Kenta Maeda. After a wild pitch moved him to third, Baez did what no other Cub has done since 1907 — he stole home.

Check out the play that not only put the Cubs up 3-0, but completely electrified the Wrigley Field crowd:

Baez’s steal of home was not only the first for the Cubs in nearly 110 years, it was just the second in franchise postseason history. Jimmy Slagle had the previous steal of home in Game 4 of the 1907 World Series.

In the bottom of the 6th inning, the Cubs maintain a 3-1 lead.

Javier Baez delivered the go-ahead hit for the Chicago Cubs in their NLDS-clinching win Tuesday night, and you may have noticed how he blatantly stared down San Francisco Giants pitcher Hunter Strickland after he rounded first base. Apparently there was a reason for that.

When asked about the icy stare after the game, Baez offered a simple response:

Baez on why he celebrated a little extra after that last hit: "Their pitcher was staring at me for no reason." #Cubs

Baez knew the hit was a potential series-clincher, but his enthusiastic clapping right in the direction of Strickland made it clear there was something else going on. As Dayn Perry of CBSSports.com notes, Strickland brushed Baez back with a pitch during Game 3 after Baez seemed to admire two balls he hit hard in previous at-bats. Baez and Giants reliever Sergio Romo also exchanged words following a strikeout during that game.

The tension may have started in Game 1, when Buster Posey took a jab at Baez over the young shortstop admiring a home run.

Whatever the case, the Giants and Cubs won’t have a chance to smooth things over until 2017. Thanks to a remarkable comeback in Game 4, Chicago is heading back to the NLCS.

Baez hit a dramatic home run in the eighth inning of Game One of the NLDS, putting the Cubs ahead 1-0 over the Giants. The homer just barely made it into the basket in left field, though it appeared that it was going much further than that. Posey, who ripped a long double off Aroldis Chapman a half inning later, was unimpressed.

Posey thought he hit HR off Chapman. And he said Baez didn't hit his as hard as he thought, "based on the way he reacted to it." Subtle dig.

Baez himself quasi-apologized for his reaction, saying, "I didn't mean to show anybody up." So it's pretty much a dead issue now. Move along

What Posey surely had to know was that, beyond that being a dramatic playoff moment worth celebrating, there was a strong wind blowing in from left. It’s plausible, if likely, that Baez did hit it as hard as he thought – the wind just knocked it down. And despite his semi-apology, Baez was defiant on Twitter after the game.

Just a bit of saltiness seeping into this series. We’re guessing Cub fans like this guy are firmly behind Baez. Javier Baez delivered some magic for the Cubs on Friday night during Game 1 of the NLDS in Chicago against the San Francisco Giants.

The game was scoreless in the bottom of the 8th until Baez blasted a 3-2 pitch from Johnny Cueto to left field.

The blast landed in the basket in left field, just clearing the fence at Wrigley Field for a home run.

Cueto had been pitching a brilliant game and only surrendered two hits until that point. In fact, two of the three hits he allowed in eight innings were to Baez.

That type of hit has Cubs fans more and more convinced that this is their year. You know that even celebrity fan Bill Murray might be thinking that:

You gotta love Murray’s shirt too: