Serena Williams may have lost the Wimbledon final on Saturday, but it’s safe to say she had the respect of everyone watching.

That includes Jelena Djokovic, wife of Novak, who gave birth just one day after Williams did ten months ago. It’s safe to say she was quite awed by the fact that Williams was playing at all, much less in a Grand Slam final.

This amazing woman @serenawilliams has given birth to her little girl just one day before I gave birth to my girl 10 months ago. I am barely surviving to watch, and she is RUNNING and playing FINAL of a Grand Slam just to put things into perspective.

Williams lost in straight sets to Angelique Kerber, and in her post-match interview, she admitted that she was carrying a torch for mothers everywhere as she played.

"To all the moms out there, I was playing for you and I tried" — Serena #Wimbledon pic.twitter.com/drPtMSnqsR

Williams has only played in a handful of tournaments since giving birth, and has dealt with various WTA-induced annoyances in the process. If she’s already contesting major finals, it’s safe to say that it’s only a matter of time before she’s consistently back to her very best. 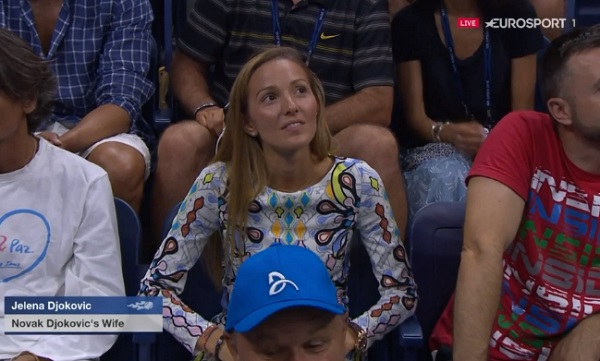 Novak Djokovic is now playing for much more than prize money, world rankings and his legacy. The man got married last year to longtime girlfriend Jelena Ristic, and the two recently had their first child — a son named Stefan. That makes Djokovic a family man and gives him even more motivation to succeed on the court.

And while Djokovic is playing at the Australian Open, Jelena, who is typically a fixture in his box, is home taking care of their newborn. She even sent a few tweets showing photos of her and her son watching Nole play:

The photos were a smash hit over social media and were well received by Nole, who saw one for the first time after winning a match. You could see the look in his eye change upon seeing his son.

There are many parallels between Djokovic and Murray. They are of a similar age, they’re friends, and they both have taken steps in their personal lives. Djokovic got married; Murray got engaged. They’re both family men now.

Novak Djokovic and girlfriend Jelena Ristic getting married after Wimbledon

Novak Djokovic is headed for quite a week.

The 27-year-old Serbian tennis stud won his seventh major and second Wimbledon Sunday, and he will be celebrating something even bigger a few days later: a marriage.

Djokovic and his longtime girlfriend Jelena Ristic are getting married, and Blic Online reports that the wedding is scheduled for Wednesday the 9th, just three days after the conclusion of Wimbledon.

Blic says the wedding will take place in St. Stefan Peninsula in Montenegro. The guest list reportedly includes many Serbian tennis players and other members of the tennis world, including Viktor Troicki, Janko Tipsarevic, Ana Ivanovic, Jelena Jankovic, Nenad Zimonjic, Andy Murray and Maria Sharapova. Murray was bounced from Wimbledon in the quarterfinals and also is said to be planning a wedding in the near future.

One notable element of the upcoming wedding is that Ristic is pregnant and due in October. She’ll be 6 months pregnant at the time of their marriage.

Nole and Ristic got engaged in September after many years of dating. She has been a prominent figure traveling the tour with him and supporting him in his matches.

Even though planning a wedding can create a headache and nerves for many people, it doesn’t seem to be affecting Djokovic, who reached the finals with a four-set win over Grigor Dimitrov, and defeated Roger Federer in five to win it all.

Novak Djokovic announced some big news on Thursday — he and longtime girlfriend/fiancee Jelena Ristic are expecting their first baby.

Djokovic and Ristic have been dating for several years and got engaged in September.

Nole turns 27 in May, is currently ranked No. 2 in the world, and he has won six majors. And now he’s getting married and expecting his first child. Things sure do appear to be coming together nicely for him. Top-ranked tennis star Novak Djokovic and his girlfriend Jelena Ristic have been dating for around eight years. We have grown used to seeing Ristic courtside at almost all of Djokovic’s matches, and she also happens to be the director of his charity foundation. That’s why it comes as no surprise that the happy couple is engaged.

Serbian news outlet InSerbia.com first reported that Djokovic proposed to Ristic earlier this week in Monte Carlo. After news of the engagement got out, Djokovic confirmed things via Twitter.

Meet my fiancé and future wife :) So happy! Thank you for wonderful wishes #NoleFam and friends! http://t.co/jEfo5fLu8i

If you remember, Djokovic recently said that he and Ristic have talked about marriage and spending their future together. To make the story a bit more interesting, there have also been rumors that world No. 3-ranked tennis player Andy Murray could be Djokovic’s best man.

The wedding bells have been a long time coming for Djokovic and Ristic. Marriage makes perfect sense for a couple that seems to have such a positive influence on each other’s lives.