Are the Miami Marlins actually trying to put together an improved team? Based on their actions Monday, that appears to be the case.

The Marlins made some additions on Monday. They acquired second baseman Jonathan Villar in a trade with Baltimore and Jesus Aguilar via waivers.

The Orioles had placed Villar on waivers because they did not want to pay him an elevated salary in the final year of his arbitration. Miami dealt pitcher Easton Lucas to get him. Villar batted .274 with 24 home runs and 40 stolen bases last season for the O’s. He made $10.4 million and is set to earn even more in 2020.

The Marlins claimed Aguilar off waivers from the Rays. Aguilar batted .274 with 35 home runs in 2018, but fell off last season and hit just .236 with 12 home runs in stints with Milwaukee and Tampa Bay.

The Tampa Bay Rays’ hunt for a bat is not limited to non-contenders.

According to Marc Feinsand of MLB.com, the Rays have shown interest in Milwaukee Brewers first baseman Jesus Aguilar, who is surging after a slow start to the season.

Sources tell me and @juanctoribio that the Rays have expressed interest to the Brewers in Jesus Aguilar. He’s performed better in July (1.080 OPS) than the first three months (.634 OPS), so deal would have to help Milwaukee now for Brewers to move Aguilar.

The Rays would have to get creative, with Milwaukee very much in playoff contention. The Brewers are only a half game out of the second wild card spot and two games out in the NL Central, and they’ll be expecting to make the playoffs.

Aguilar erupted onto the scene with 35 home runs in 2018. He only has eight in 2019, despite the uptick in batting average.

The Rays are clearly seeking a bat, as they’ve asked around for another All-Star position player in recent weeks. 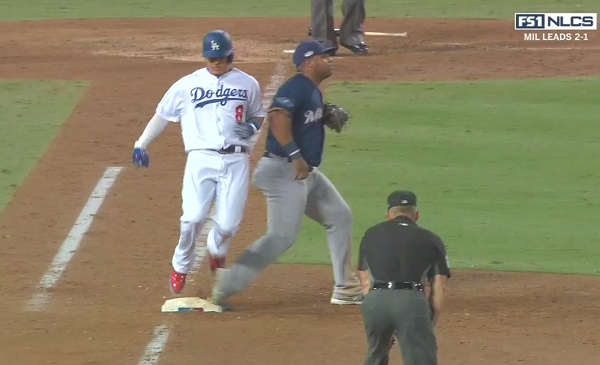 Brewers’ Aguilar has smack talk for Cubs ahead of decisive game

The Brewers topped the Detroit Tigers in the final game of the regular season on Sunday to force an NL Central tiebreaker game with the Chicago Cubs. In a postgame interview after the win, Aguilar talked some smack to Milwaukee’s division rivals. Here is what he said, per Adam McCalvy of MLB.com:

In the FS Wisconsin postgame, Jesus Aguilar said this of Monday's tiebreaker against the Cubs: "They know they've got problems tomorrow." https://t.co/1UFxRHHMiG

Monday’s decisive game, which the Cubs are hosting, will see the winner earn the division crown and the loser go to the NL Wild Card game. The two teams finished with identical 95-67 records this year, but the Cubs won the season series against the Brewers 11-8.

As for the All-Star Aguilar, who hit 35 homers and 108 RBIs in 2018, his dig is just the latest shot fired between these two teams in the last month.

Jesus Aguilar is not worried about the Home Run Derby potentially derailing his breakout season.

The Milwaukee Brewers slugger, who will be participating in next week’s competition at Nationals Park, told reporters on Friday that he does not believe in the theory that the Derby messes up a player’s swing for the rest of the year, per Tom Haudricourt of the Milwaukee Journal-Sentinel.

#Brewers Jesus Aguilar will have coach Carlos Subero pitch to him in All-Star HR Derby. "He throws batting practice to me every day," Aguilar said. Aguilar said he does not believe in theory that HR Derby messes up a player's swing for rest of season.

The 28-year-old Aguilar has been one of the stories of the year so far, coming out of obscurity in his fifth MLB season to lead the National League in both home runs (24) and OPS (1.019). As a result, he was selected for his first career All-Star team and his first career Home Run Derby appearance.

The idea that competing the Derby negatively impacts a player’s swing has become a rather popular one — many have pointed to the second-half slumps that players often experience after participating in it. However, Aguilar now joins this notable former player in dismissing the notion as a bunch of hooey.