As God is our witness, Travis Kelce was broken in half on Thursday night.

During his team’s Week 2 showdown against the Kelce and the Kansas City Chiefs, Los Angeles Chargers safety Derwin James did his best impression of The Undertaker. As Kelce was trying to cross the goal line after a reception late in the third quarter, James halted Kelce right in his tracks and slam-dunked him into the turf. Check it out.

One Twitter user did a major public service by setting the video of Kelce getting folded into a pretzel to the commentary of legendary WWE announcer Jim Ross. Take a listen.

Finishing move jokes aside, that show of strength was no small feat for James. Kelce is one of the most physically intimidating pass-catchers in the league at 6-foot-5 and 250 pounds. But James made him look like McLovin’ with that emphatic drive into the ground.

Kelce did get the last laugh as Kansas City held on for the 27-24 victory. But it came at the cost of him becoming the latest sports figure to fall victim to the Ross meme. 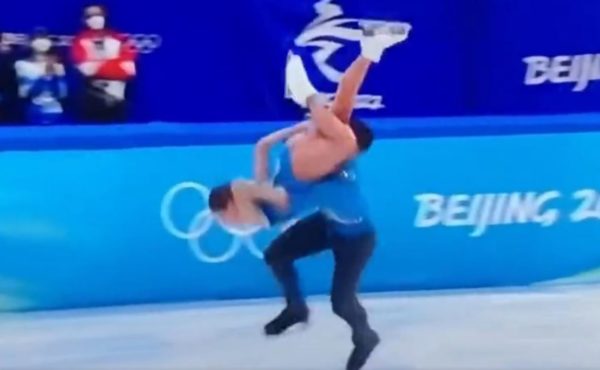 A Priest gave my wife Jan her last rites tonight. My little Angel is gone.

Ross had been providing updates on Jan’s condition ever since learning of her crash on Monday night.

Jan was riding her Vespa home from the gym without a helmet and was hit from behind by a car driven by a 17-year-old. She suffered multiple skull fractures and went into emergency surgery. Ross said they needed “a miracle” for her to survive.

Jan was in critical condition earlier on Wednesday, but Jim shared the sad news later in the evening. TMZ says she was 55 years old.

Jan Ross, the wife of WWE announcing legend Jim Ross, is fighting for her life in an Oklahoma hospital after she was involved in a serious scooter accident Monday night.

In a blog post on his website Wednesday, Jim Ross said his wife “needs a miracle” after she suffered a serious brain injury when her Vespa was hit from behind by another driver. Jan was not wearing a helmet at the time of the crash.

“Monday night at approximately 9:30 pm while I was recording the Ross Report about 30 miles from our home, my wife Jan was riding her Vespa home from the gym when (she) was struck from behind by an automobile driven by a 17 year old young man,” Jim Ross wrote. “Jan suffered a catastrophic brain injury including multiple skull fractures. My little Angel was unfortunately not wearing a helmet which arguably would have prevented the extreme nature of her injuries.

“I will fully admit that there has been no experience in my life that could have prepared me for this life changing week. To see one’s life partner and love of one’s life being kept alive via life support equipment is tragically heartbreaking.”

Jim went on to explain that the swelling in Jan’s brain must subside in order for her to have a chance at survival.

Ross is one of the most beloved figures in WWE history, and he thanked fans for their prayers and support. We hope the Ross family receives some good news in the near future.

Legendary WWE announcer Jim Ross revealed on Tuesday that his wife has been hospitalized after being involved in a serious scooter accident.

Ross sent a tweet early Tuesday morning informing fans that his wife Jan suffered multiple skull fractures after being hit while riding her Vespa near the couple’s home in Oklahoma.

My wife Jan, my little angel, was hit while riding her Vespa & has multiple skull fractures. She's in surgery now. We need a miracle.

Ross told TMZ Jan was not wearing a helmet when she was struck from behind by the driver of a Mercury Grand Marquis. She was thrown from the scooter and struck her head, which resulted in multiple fractures. Both the Vespa and the other vehicle caught fire. Jan underwent surgery at a nearby hospital and was in critical condition, with Jim describing her condition as “touch and go.”

Here’s hoping everything turns out OK for the Ross family. Jim Ross’ Twitter account was hacked on Sunday morning, setting off some speculation that the wrestling commentator had died. To all his family and friends, Jim Ross is alive and well. I just spoke to him. Wants friends and family to know this. #wwe

The WWE announced on Wednesday that legendary announcer Jim Ross would be retiring to work on personal ventures. While Ross has his own endeavors to pursue, such as promoting his barbecue sauce, it sounds like the WWE pushed him out more than he retired.

Ross debuted with WWE in 1993 to call WrestleMania IX. He served as an announcer through 2011, when he was fired as part of a storyline involving John Laurinatis. He has appeared here and there since then, including last year when he filled in for Jerry Lawler, who had a heart attack last September. But Ross’ inability to control wrestling legend Ric Flair during the 2K Sports symposium last month may have helped to push him out.

According to Wrestling Inc, Flair embarrassed the company so much during the 30 Years of WrestleMania symposium filmed the same weekend as SummerSlam in August, there was talk about letting Ross go for his failure to properly moderate the situation. Ross was the host/moderator for the event that featured WWE superstars and legends Daniel Bryan, Dolph Ziggler, Rey Mysterio, Steve Austin, Paul Heyman, Mick Foley and Flair as panelists.

Flair, who was obviously drunk, took over the event and completed railroaded the entire thing. Ross was also accused of being drunk because he was slurring his words, but he said that was due to his Bell’s Palsy condition.