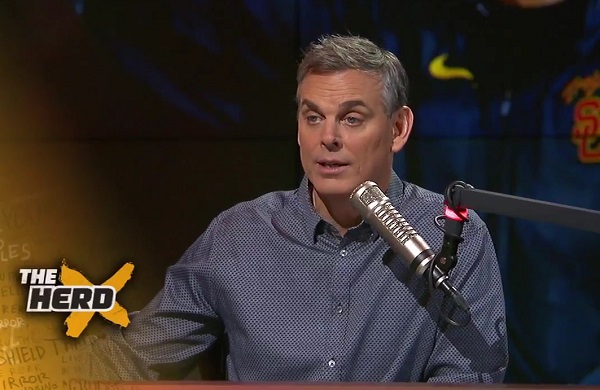 END_OF_DOCUMENT_TOKEN_TO_BE_REPLACED

Joe Burrow explains why he has not signed with Bengals yet

Fear not, Joe Burrow is not holding out from the Cincinnati Bengals. It could still be some time before he signs his contract, though.

Burrow told the “Pardon My Take” podcast that due to the uncertainty over the status of the 2020 season, he has yet to sign his rookie deal.

“I haven’t signed the contract yet, so we’re just kind of waiting to see what happens over the next three months, because we really don’t know,” Burrow said, via Ryan Young of Yahoo Sports.

Burrow will be due a significant bonus when he signs. If the NFL has to play games without fans, the financial implications will be massive. That uncertainty is definitely causing some issues right now, and it’s not going away anytime soon.

Grant Delpit could not be more thrilled that he ended up in the same division as No. 1 overall pick and former LSU teammate Joe Burrow.

The All-American safety, who was drafted by the Cleveland Browns in the second round with pick No. 44 on Friday, had some great trash talk for the new Cincinnati Bengals star Burrow.

“I’m very excited to pick Joe off twice a year,” he said of his ex-quarterback, per ESPN’s Jake Trotter.

Delpit and Burrow were teammates at LSU for the past two years and won the national title together last season. Now that they are both in the AFC North though, they will get an opportunity to see what it is like to play on opposite sides of the field.

Burrow already has a target on his back from others in the division, and now he can add a one-time cohort of his to the list as well.

Joe Burrow is ready to give Skyline Chili another chance

Skyline Chili is a local staple in the Cincinnati area and is considered one of the city’s signature foods. But Cincinnati’s new quarterback has some work to do if he wants to grow to like it.

Joe Burrow is an Ohio native who is familiar with Skyline. Familiar enough to have some fairly recent tweets saying some rather negative things about Cincinnati’s pride and joy.

Just a reminder that Skyline is terrible. That is all.

On Thursday, after the Cincinnati Bengals made Burrow the top pick in the NFL Draft, the quarterback admitted that he was open to changing his mind.

Joe Burrow on Skyline Chili: "You know, I haven't tried it in a long time. Maybe my tastes have changed. We'll have to find out. Maybe I'll try it here in the next few weeks."

Burrow has already been welcomed by a Cincinnati sports figure. Maybe the general public will wait until the final food verdict comes in.

Joe Burrow received a warm welcome to Cincinnati from one of the city’s other top athletes.

Cincinnati Reds pitcher Trevor Bauer predicted “big things” for the city’s sports teams in the years to come as he welcomed Burrow in a tweet Thursday.

Hey @Joe_Burrow10 congrats and welcome to Cinci! Big things coming for Cincinnati sports in the next couple of years!

Bauer is a free agent at the end of the 2020 season. This probably isn’t a hint that he’s planning to stick around in Cincinnati, but it’s interesting all the same.

As for Burrow, big things are expected of the Ohio native. He’ll probably appreciate this welcome from Bauer more than the greeting he got from one of his future rivals.

Joe Burrow has been waiting a long time to hear his name called during the NFL Draft, but he may not be looking quite as dapper as he had hoped when that moment finally comes.

Like millions of others across the world, Burrow has not been able to visit a barbershop or hair salon while following stay-at-home orders. In the hours leading up to the draft on Thursday, Burrow sent a hilarious tweet warning people that he isn’t thrilled with the hairstyle he’s going to have during the big event.

We feel you, Joe.

In addition to being the best quarterback in the draft class, Burrow also has a great sense of humor. We saw an example of that earlier this offseason when he mocked the concerns over his small hands. Cincinnati Bengals fans are going to love him.

Joe Burrow has never shied away from reminding everyone how much LSU meant to his career, and on the eve of the NFL Draft, he’s paying tribute one more time.

The LSU football account shared a message from Burrow, the likely first overall pick in the draft, thanking the state of Louisiana one more time.

A message from Louisiana's own…
Joe Burreaux pic.twitter.com/QVhboLk9w4

The billboard even shows the Cajun version of Burrow’s jersey that he debuted at his Senior Night.

An unheralded transfer quarterback, Burrow became the Heisman Trophy winner with the Tigers and won a national title as well. The fans in Baton Rouge love him as much as he loves them, and they should be bursting with pride when he goes No. 1 on Thursday.