Joe Flacco says his kids tell him how much he stinks As if Joe Flacco hearing negative talk about him from fans and the media isn’t enough, the New York Jets quarterback says he also gets the harsh treatment at home.

The Jets shared a video on Twitter Wednesday to promote the preseason finale of the team-produced show, “One Jets Drive.” In the video clip, Flacco is shown talking about how little respect he gets at home. He says his kids are so hard on him about how much he stinks that he even has to pull up some highlights from his better days.

The story is funny, and the way Flacco tells it is even better. Take a look:

Flacco is undeniably past his prime. The 37-year-old has hardly been able to win a game the last three seasons. But there was a time when he was more than serviceable, especially while he was backed by Baltimore’s defense.

From 2008-2014, Flacco had a strong run with Baltimore. He helped the Ravens to a winning record in all but one season during that span. And nobody will ever forget his incredible run during the 2012 postseason where he threw for 11 touchdowns and no interceptions, while winning Super Bowl MVP. Flacco needs to fire up the tape from that playoff run for his kids.

Flacco is in line to begin the season as the Jets’ starting quarterback while Zach Wilson is out. He has gone 0-5 as the Jets’ fill-in starter over the last two seasons. His kids have only known him as a bad backup! There is a strong likelihood that Joe Flacco starts for the New York Jets in Week 1, and Jets rookie wide receiver Garrett Wilson might be OK with that.

Zach Wilson had surgery on Tuesday to repair the torn meniscus he suffered during Friday’s preseason game against the Philadelphia Eagles. The initial recovery period for Wilson was set at 2-4 weeks.

While speaking to reporters on Monday, Garrett Wilson talked about the difference between catching balls from Flacco as opposed to Zach.

“It’s a lot of experience right there with Flacco,” Garrett Wilson said. “He takes some pace off, can put pace on the ball. He does a good job of making the passes receiver-friendly. He’ll take something off the ball when you’re running a slant route, versus an out route, he’ll put some zip on it, because it’s gotta be. Things like that.”

Garrett Wilson talks about the differences between Joe Flacco and Zach Wilson: pic.twitter.com/SIfq99NCUH

Could this be a subtle jab at Zach Wilson’s game? After all, he did struggle as a rookie, throwing nine touchdowns compared to 11 interceptions in 13 games last year. Zach Wilson does have good arm strength, but there are times when it makes more sense to take a little zip off the ball. Perhaps Flacco, a veteran, has a better understanding of that concept compared to the sophomore quarterback.

While the 37-year-old Flacco is past his prime, he has had a solid career that includes a Super Bowl ring and Super Bowl MVP trophy. He is certainly capable of filling in for Zach Wilson in the short-term, and the two appear to have a good relationship.

Joe Flacco has agreed to remain with the New York Jets in a backup quarterback role, and Zach Wilson seems quite pleased about that. The former BYU star had an awesome way of showing it.

After the Jets announced that they have re-signed Flacco, Wilson sent a hilarious tweet welcoming the 37-year-old back. He called Flacco “dad” and referred to him as an “Elite QB.”

Always helps to have an Elite QB in the locker room.

Those who have followed Flacco’s career know that there was once a highly entertaining debate over whether Flacco should be considered “elite.” That question has since been answered (hint: he’s not), but the former Baltimore Ravens star does have a Super Bowl ring and Super Bowl MVP trophy. He may not be elite, but he has had a solid career.

Flacco was with the Jets in 2020 before he signed with the Philadelphia Eagles as a backup to Jalen Hurts last season. He was then traded back to New York after Wilson went down with an injury. Obviously, he and Wilson established a close relationship during their brief time together.

Joe Flacco to start for Jets against Dolphins

The New York Jets will be starting their third different quarterback of the season on Sunday. This time, it’s Joe Flacco getting the call.

Flacco played a handful of snaps in last week’s blowout loss to the Buffalo Bills after White had the wind knocked out of him. It’s possible White would have been benched for performance anyway, as he threw a whopping four interceptions. Fans were quick to turn on White after crowning him the week before.

Flacco started four games for the Jets last year. He’ll face a tough task against a Dolphins team that is riding high following a big upset win over the Baltimore Ravens. 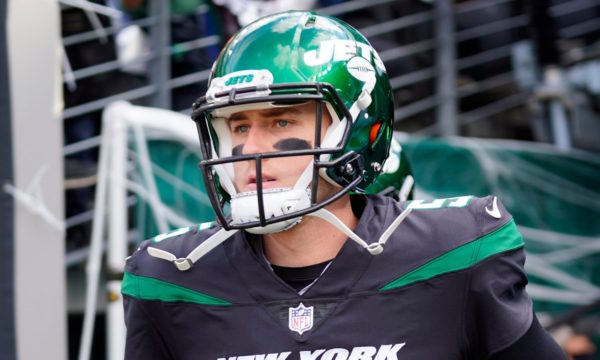 The New York Jets are bringing in all the stops as they look to continue competing for the No. 1 overall draft pick in 2022.

The Jets on Monday night acquired Joe Flacco in a trade with the Philadelphia Eagles. They need the extra quarterback now that Zach Wilson is out with a knee injury.

The Jets are even giving Philly a conditional pick for Flacco.

Jets trading a conditional 6th-round pick to Philadelphia that can possibly be a 5th based on play time for QB Joe Flacco, per sources.

There is a belief that Flacco should be able to pick up the Jets’ offense quickly based on his history.

Joe Flacco should be up to speed quickly on Mike LaFleur's offense, since Flacco spent 2019 in Denver with Rich Scangarello, who's also from the Kyle Shanahan tree.

The trade marks a welcome back for Flacco, who started four games at quarterback last season for the Jets, going 0-4.

The Jets began the season with the worst quarterback depth chart in the league and are paying the price.