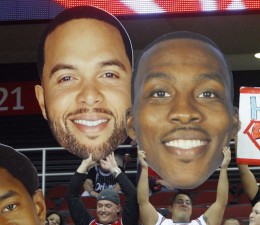 The Knicks have done everything possible to position themselves for improvement beginning next year. They acquired Tracy McGrady from the Rockets — not for his random DNPs due to knee problems — but for his expiring contract. With around just $18 million in salaries committed for next season, they’re in position to load up on free agents this summer. While Donnie Walsh may have thought that clearing cap space was the biggest obstacle for the Knicks, he may have discovered that convincing free agents to play in the Big Apple is their biggest challenge. Take what Hawks star guard and upcoming free agent Joe Johnson said prior to his Monday night game in New York:

“I don’t think one guy can turn the whole franchise around…I think two guys would be more attractive … I can’t backtrack. I can’t go into a situation where when I first got here to Atlanta.”

When Joe Johnson signed with Atlanta, they were coming off a 13-69 season. It took three years before they made the playoffs (with a 37-45 record), and it wasn’t until Johnson’s fourth and fifth years with the club that they started winning. Johnson’s comments are reflective of most players’ sentiments: they want to go somewhere with an opportunity to win. The Knicks don’t present that opportunity at the moment and they wouldn’t even be more than a good playoff team if they added LeBron. They need two of the following combination to be a potential title team: LeBron, Wade, Bosh, Amare, Johnson or Dirk. They really need LeBron and Wade but that would be quite a task to pull off. Losing by 20 at home to the Nets and going 0-for-18 on three pointers doesn’t help your effort either.