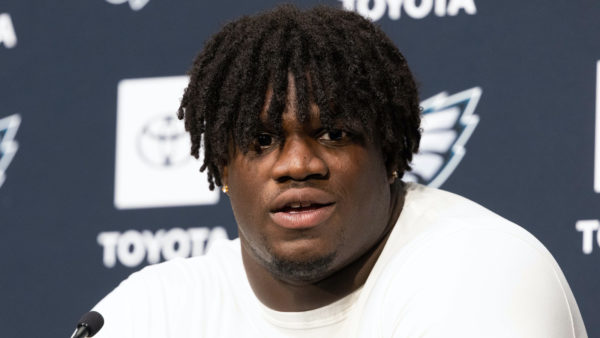 Philadelphia Eagles first-round pick Jordan Davis has an incredible combination of strength and explosiveness, and a video that went viral this week illustrated how much potential he has. The defensive tackle is not a fan of the clip, however.

A fan who attended Eagles training camp shared a video on Sunday that showed Davis absolutely bullying center Cam Jurgens. The clip had been viewed more than 4 million times as of Thursday morning.

A reporter asked Davis about the impressive video, and his response might surprise you.

"I hate it, honestly… You see one rep, but you don't see Cam getting me in another rep"

Jordan Davis stands up for his teammate when asked about the viral video of him pushing back Jurgens.

Love everything about this answer!#Eaglespic.twitter.com/mt05oUwrk1

“I hate it, honestly,” Davis said. “I just feel like it’s very one-sided. You see one rep, but you don’t see Cam getting me at practice and getting me in the other reps. I always say looks can be deceiving. One rep goes viral or whatever, whoop-de-whoop. Cam is holding his own and is a very good player. It’s good competition. It’s iron on iron. Don’t let the hype get to you.”

Eagles players have to appreciate the rookie’s mindset. Davis obviously prides himself on being able to dominate opposing linemen, but the former Georgia star is not out to make teammates look bad. That will likely go a long way in the locker room.

Philadelphia took Davis with the 13th overall pick in this year’s draft. As you can see, the 336-pound tackle is the type of player who commands double-teams.

Georgia defensive lineman Jordan Davis may be able to claim the most impressive feat of the NFL Combine in 2022.

Davis, the 6-foot-6, 341-pound star of the Bulldogs defense, wowed scouts and executives on Saturday by posting an official 40 time of 4.78.

That is a solid 40 time in any context, but there is no precedent for a time like that at Davis’ weight. In fact, Davis actually outran Patrick Mahomes’ combine 40 time by two-hundreths of a second. His measurements are also ridiculous across the board by combine standards.

This is faster than Patrick Mahomes' 40 time (4.80) despite Jordan Davis weighing 116 pounds more than Mahomes https://t.co/jS2QJMwLwD

Davis is part of a ridiculous class of defensive players in this year’s draft. Georgia boasts a number of those players, and their school is going to produce a whole lot of picks on the first two days of the draft.

The Georgia Bulldogs finished their home schedule with a blowout win on Saturday, and one of the team’s senior standouts had a pretty fun way of celebrating it.

Defensive lineman Jordan Davis, one of the anchors of the Bulldogs’ dominant defense, went above and beyond when the band played the traditional postgame song. Davis got up and directed them himself.

That’s how you know things are going well in Athens. They don’t have this kind of fun otherwise.

Davis, a major run stopper for the Bulldogs, has firmly established himself as an NFL prospect with another strong senior season. The defensive tackle has a real chance to go as high as the middle of the first round next April.

Kirby Smart got zinged by one of his players on Tuesday about a relationship with rapper Quavo.

Smart spoke at SEC Media Days in Hoover, Ala. The Georgia coach revealed that he heard from Quavo with advice about the new Name, Image and Likeness rules.

Kirby Smart said he is excited for the NIL era and doesn't think it will ruin college football. The first person to give #UGA advice? Quavo. He texted Smart and said "don't be thirsty."

Don’t be thirsty. You got that?

Nose tackle Jordan Davis represented Georgia at the speaking event. He was asked about Smart being on a texting basis with Quavo. Davis joked that Smart probably doesn’t know any of Quavo’s songs.

Kirby Smart talked about texting with rapper Quavo, leading Georgia nose tackle Jordan Davis to be asked what it's like for his coach to have that texting relationship:

"That's cool. But I don't think Kirby can quote a song that Quavo has done."

Quavo is the front man for “Migos” and from Athens, Ga. If you ask Kirby to name a Quavo song, the answer should be a “No Brainer.”