The New York Mets pitcher tweeted a picture on Friday of Bautista throwing off a mound during an offseason workout together, adding that he thinks the 39-year-old slugger could actually pitch in a big league bullpen.

My bro @JoeyBats19 is nasty on the mound. We been working working. All jokes aside, this man can pitch in a big league bullpen. I’ll put my word on it! pic.twitter.com/mxXylJmDnn

Bautista, who sat out the 2019 campaign, was teammates with Stroman on the Blue Jays for four seasons from 2014 to 2017.

The two-time MLB home run leader has certainly been thrown at before, so getting on the mound himself as a reliever, while obviously a longshot, would be quite the way to exact his revenge. The Philadelphia Phillies claimed Jose Bautista off of revocable trade waivers recently, and they were able to work out a deal with the New York Mets to acquire the slugging outfielder.

Joel Sherman of the New York Post reports that the Mets and Phillies agreed to a deal just before their deadline on Tuesday afternoon.

#Mets have traded Jose Bautista to the #Phillies

Sherman added that the trade made sense for the Mets because they probably wouldn’t have room for Bautista with Jay Bruce now back and Brandon Nimmo returning.

Bautista is 37 and hitting just .196 on the year, but the Phillies must feel he can add some depth as they try to reach the postseason. Bautista showed that he still has some pop when he hit 22 home runs with the Toronto Blue Jays a year ago, but he batted just .203 and his numbers have been rapidly sinking each year. He has 11 homers and 42 RBI in 95 games with the Mets and Atlanta Braves this season.

Jose Bautista is nowhere near as productive of a player as he was with the Toronto Blue Jays several years ago, but one playoff contender may feel that the aging slugger could provide a boost down the stretch.

The New York Mets placed Bautista on revocable trade waivers recently, and Ken Rosenthal of The Athletic reports that he was claimed by the Philadelphia Phillies. The two teams are in the process of trying to work out a trade.

#Phillies have claimed #Mets’ Jose Bautista on revocable trade waivers, sources tell The Athletic. Teams discussing a deal, would need to complete it by tomorrow. Bautista slumped badly at start of August, but has .738 OPS in last 14 games.

Bautista is 37 and hitting just .199, so it’s hard to imagine the Mets would be asking for much in return. Bautista showed that he still has some pop when he hit 22 home runs with the Blue Jays a year ago, but he batted just .203 and his numbers have been rapidly sinking each year.

The Mets reportedly received some interest in Bautista before the July 31 non-waiver deadline, but nothing ever came of that.

The New York Mets are in sell mode, and apparently they have two players who are receiving some trade interest.

The New York Post’s Mike Puma reported on Monday that the Mets are receiving interest in Jose Bautista and Devin Mesoraco.

Mets receiving some interest in Jose Bautista and Devin Mesoraco.

Both are players the Mets have added during the season.

Bautista was signed after he was dropped by the Atlanta Braves. He has batted .235 with a solid .828 OPS in 51 games for the Mets.

Mesoraco was acquired from Cincinnati in the Matt Harvey trade. The catcher has batted .232 with a .739 OPS in 46 games for the team.

If they Mets can get anything for either player, they would likely take it.

Watch: Jose Bautista gets standing ovation in return to Toronto

Jose Bautista made his long-awaited return to Toronto on Tuesday night, and it certainly lived up to the hype.

The New York Mets outfielder was back at the Rogers Centre for the first time since his memorable ten-year run with the Blue Jays ended after last season. Bautista stepped up to the plate in the top of the first inning and was greeted by a raucous standing ovation from the Toronto fans. Take a look:

Joey Bats still gets love in the 6. pic.twitter.com/xqOxAwTZt2

“It feels great, it feels like nothing has changed,” said Bautista before the interleague game, per Gregory Strong of the Canadian Press. “It’s a good feeling to be back. Obviously a lot of emotions and a lot of memories.”

There are lot of memories indeed for the 37-year-old Bautista, who enjoyed the best years of his career with the Blue Jays. After joining the team in 2008, Bautista would go on to make six straight All-Star teams, lead the league in homers twice, and deliver one of the most iconic moments in playoff history.

The Blue Jays would decline his team option after the 2017 season, leading to Bautista briefly playing for the Atlanta Braves before signing with the Mets in May. If Tuesday night was any indication though, the veteran slugger will always be a Toronto lifer in the eyes of the local fans.

Look: Rangers fan has tattoo of Jose Bautista being punched Rougned Odor’s right hook to Jose Bautista’s jaw is forever etched into our memories and now forever etched onto one Texas Rangers fan’s arm as well.

During the broadcast of Saturday’s game against the Chicago White Sox, FOX Sports Southwest caught up with Rangers fan Austin Bazar, who showed off an amazing tattoo on his left bicep area of Bautista getting clocked by Odor. Bazar, who said that the tattoo took over ten hours to complete, was named the “Progressive Fan of the Game” as a result. Have a look:

Look at the dedication of this @Rangers fan, sitting in the chair for 10 hours to get this tattoo.#TexasRangers pic.twitter.com/bSXrRFoWdY

The incident, which took place during a game in May of 2016, has been hard to forget since. While Bautista is no longer a member of the Toronto Blue Jays (he is now a New York Met), Odor is still going strong for the Rangers in what is now his fifth career season with them.

If you asked Bautista, he’d probably tell you he much prefers this tattoo instead.

The New York Mets reportedly have a deal in place with Jose Bautista.

Fan Rag Sports’ Jon Heyman says the two sides have agreed to a deal that would bring Bautista back to the Big Apple.

Bautista was released by the Atlanta Braves on Sunday after getting off to a rough start with them. He batted just .143 with two home runs in 12 games while playing poorly at third base. Although he had an open invitation to join the team’s Triple-A team, Bautista will try to make it work with another MLB team.

Bautista would give the Mets a needed right-handed bat. He also can play third and the outfield, which is helpful with both Todd Frazier and Yoenis Cespedes hurt.

Jose Bautista’s MLB career may not be over just yet.

According to Mike Puma of the New York Post, the Mets have shown interest in the 37-year-old former Toronto Blue Jay, who was released by the Atlanta Braves after just 40 underwhelming plate appearances.

The Mets are showing interest in Jose Bautista, who was released by the Braves on Sunday.

The Braves had tried to use Bautista at third base, but he hit .143 in limited duty with two home runs, and his defense wasn’t good enough to justify keeping the bat in the lineup. The Mets are clearly looking for a little bit of pop, and if they can find something left in Bautista, it can’t hurt.

Jose Bautista’s decision to sign with the Atlanta Braves was motivated by more than just money.

Chris Cotillo of SB Nation reported on Friday that the former All-Star slugger had a bigger offer from the Cleveland Indians that he turned down. Cotillo also adds that the deciding factor was Bautista’s relationship with Braves GM Alex Anthopoulos, who previously held the same position with Bautista’s former team, the Toronto Blue Jays.

Indians made a higher offer to Jose Bautista than the Braves did, sources tell SBN. Bautista’s relationship with Alex Anthopoulos was the deciding factor. CLE, ATL, one other club in it until the end.

The 37-year-old stunned many by signing a one-year minor-league deal with the rebuilding Braves earlier this week. It is especially surprising in retrospect given that the Indians are a legitimate World Series contender and Bautista has yet to win a ring as he enters his 15th MLB season.

Granted, the Braves have an interesting strategy for how they are going to deploy Bautista, so perhaps that factored into his decision as well.

Braves sign Jose Bautista, plan to use him at third base 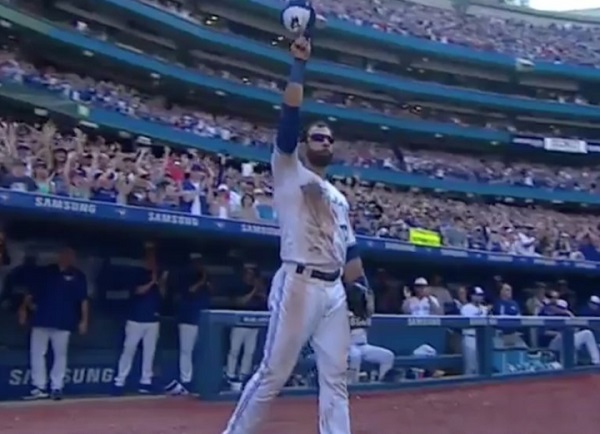 The Atlanta Braves have thrown everyone a curveball with the signing of Jose Bautista to a minor-league deal.

The Braves announced the surprising deal on Wednesday with an even more unexpected twist — Bautista will report to extended spring training and begin working at third base.

The Atlanta #Braves today agreed to terms with free agent infielder José Bautista on a one-year minor-league contract for the 2018 season, and he has reported to Atlanta’s extended spring training complex in Lake Buena Vista, Fla. He will play third base.

Alex Anthopoulos, who was part of the Toronto Blue Jays front office that acquired Bautista, is currently GM of the Braves, so the links are there.

Bautista hasn’t played regularly at third base since 2011, though he came up as one when he was much younger. The hope may be that he can eventually take over the hot corner at the MLB level from Ryan Flaherty, who isn’t a permanent solution despite a hot start.

The question is what Bautista’s bat has left to offer. He hit just .203 with 23 home runs for Toronto in 2017, and he had to fend off retirement rumors as recently as last month.