The video of Buffalo Bills offensive coordinator Ken Dorsey having a coaching box meltdown at the end of Sunday’s game against Miami has attracted a lot of attention. The team’s star player, however, clearly is not bothered by it.

Dorsey lost his cool at the end of the game as the Bills failed to get set and spike the ball in time to attempt a game-winning field goal attempt in a 21-19 loss. The video went viral and attracted some amusement, but not from Josh Allen, who said he did not see the reaction as “bad frustration.”

The Bills quarterback’s take on the video was simple: if you’re okay with losing, you’re probably a loser.

"You show me someone who's ok with losing and I'll show you a loser." Josh Allen when asked about the Ken Dorsey video from last weekend. #BillsMafia pic.twitter.com/j1vQCFGPEG

Dorsey, for what it’s worth, suggested he was going to try to correct his behavior. Allen probably doesn’t want that, and few would argue with him here. If anything, he probably understands, at least based on some of what he has previously said about his mentality. Josh Allen and Patrick Mahomes are regarded as two of the best quarterbacks in the NFL. Both can win games with their arm or their legs, making them incredibly difficult to play against on defense. Former NFL head coach Rex Ryan, who made his name as a defensive coordinator, knows that as well as anyone. However, he had an interesting answer in a Thursday appearance on “The Dan Patrick Show” when asked which quarterback he would rather put together a defensive gameplan for.

“I really think probably Patrick Mahomes, which is a ridiculous statement because he’s amazing,” Ryan said. “But Josh Allen, to me, I see the difference in the red zone. Josh Allen almost appears to be unstoppable in the red zone. He can run through it like a halfback and the power of a fullback, he’s got a bazooka for an arm. Both of these kids do.

“Kansas City’s always about the shovel pass and all that type of stuff. You don’t see Mahomes with that threat of running through linebackers that you do with Josh Allen, and I think that kind of separates them in the red zone.”

As Ryan says, it’s a matter of picking your poison. The former coach is correct, though, when he points out that you’re unlikely to see Mahomes do anything quite like this.

Mahomes has the hardware to his name, having won a Super Bowl. Allen is not there yet, but the Bills are early favorites to win the title this season. 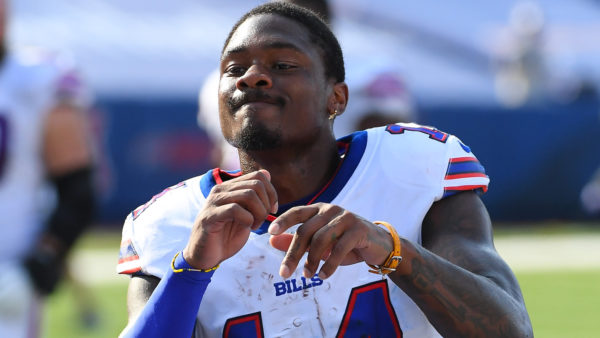 The Buffalo Bills are proving to be as good as predicted in the 2022 season. Part of that is probably down to the rapport between quarterback Josh Allen and wide receiver Stefon Diggs.

Diggs shed some light on that partnership on Tuesday during an interview with “The Rich Eisen Show.” The wide receiver hilariously said he wanted to “grow old” with Allen, and joked about sending out joint Christmas cards.

We asked #BillsMafia WR @stefondiggs after his three-TD performance who exactly HIM is and just how much he loves @JoshAllenQB:#NFL @buffalobills pic.twitter.com/KDMPTiN3hg

“Like family. That’s my guy,” Diggs said. “I’m trying to get some Christmas cards with us on it. I might send you guys some. He’s a hell of a quarterback. Since I met him, it kind of clicked. You don’t click with everybody. That’s somebody I felt like, damn, I could grow old with you. I can see myself with you for a while.”

Star quarterbacks and their wide receivers can sometimes find themselves at odds depending on the number of targets and other factors. That is clearly not the case here, and judging from Allen’s past remarks, that feeling is mutual.

Diggs is in his third season with the Bills, and has already surpassed 3,000 receiving yards with the team since being traded there in 2020. He looks poised for another massive season. Von Miller is pouring on the hot take sauce.

On an episode this week of his show “The Voncast” for Bleacher Report, the Buffalo Bills linebacker Miller offered a bold prediction about the 2022 season — he believes that Bills QB Josh Allen will win NFL MVP.

Miller is obviously not an impartial observer since Allen is his teammate. But his prediction here might not be too far-fetched at all.

The last nine NFL MVP winners in a row have been quarterbacks. Allen, meanwhile, is arguably the best quarterback in football right now. He just led Buffalo to a statement Week 1 victory on the road over the defending champion Los Angeles Rams and has a true dual-threat skillset that few signal callers possess. If Allen can keep guiding the Bills into the win column, he should indeed have an excellent case for MVP honors.

Buffalo does have certain concerns about the 26-year-old Allen. But for the first-year Bills defender Miller, the Allen hype train is full speed ahead.

The Buffalo Bills would be hard-pressed to find anything they disliked about Josh Allen’s performance on Thursday night. However, head coach Sean McDermott suggested there might be one thing worth looking at.

McDermott hinted at some minor concern about how often Allen ran the ball in the second half despite the Bills’ big lead. The coach suggested that was something his staff might look at moving forward.

Asked about Josh Allen's running, especially in the 2nd half, Sean McDermott doesn't delve deep into the topic but does say the coaches can do a better job with that moving forward. #Bills

Allen was dominant as a rusher during Thursday’s game, and that aspect is a big part of Buffalo’s success on offense. However, he was still taking off in the fourth quarter, even when the Bills held a comfortable 21-point lead.

The concern is that Allen is more vulnerable to injury when running the ball. The Bills would hate to see something happen to him on a garbage-time play. Reining in the star quarterback may be easier said than done, but the Bills will at least take a look at it considering their status as Super Bowl favorites. The Buffalo Bills showed the world on Thursday night why they are the favorite to win the Super Bowl this year, and no one came out of the game looking worse than Jalen Ramsey.

Ramsey was absolutely cooked during the Bills’ 31-10 win over the Los Angeles Rams. According to Pro Football Focus, Josh Allen had a perfect passer rating of 158.3 when targeting the All-Pro cornerback. Ramsey was thrown at seven times and allowed six catches for 124 yards and two touchdowns.

He was targeted seven times, allowing six receptions for 124 yards and 2 TDs.

The second score Ramsey allowed came when Stefon Diggs burned him in the second half. It appeared there may have been a blown coverage, but Diggs still let Ramsey hear about it.

Josh Allen to Stefon Diggs for a 53-yard TD on Jalen Ramsey.

Then Diggs made sure to let him know about it 🗣️

Not that anyone would feel badly for Ramsey, but the five-time Pro Bowler had it coming. After the game, an old quote went viral in which Ramsey called Allen “trash.”

Feels like it’s been forgotten because it happened five years ago, but Jalen Ramsey calling Josh Allen “trash” aged so poorly. pic.twitter.com/1nR5Nab7cw

We are guessing Ramsey’s opinion of Allen has changed quite a bit over the past five years. Between his perfectly placed passes and the ferocious stiff-arm he mixed in (video here), Allen showed once again why he is arguably the most talented quarterback in the NFL. Josh Allen began the 2022 NFL season like he was making a run at this year’s NFL MVP award.

Allen was his typical dual-threat self early in the Buffalo Bills’ season opener against the Los Angeles Rams on Thursday night. The Bills quarterback threw for two touchdowns through the first three quarters. He also rushed for 33 yards and showed off the physical aspect of his game.

Allen’s Bills had a 3rd-and-7 early in the third quarter. The Bills QB pulled the ball down and ran to his left to try for the first down. He encountered Nick Scott just as he was approaching the first down marker and stiffarmed the Rams safety. Take a look:

Josh Allen! Stop that man had a family #thursdaynightfootball #stiffarm

That is one physical, tough dude.

It’s no surprise that Allen has 2,325 yards and 31 rushing touchdowns during his NFL career. He’s even willing to get physical with his own teammates.

The Buffalo Bills have handed their punting job over to rookie Matt Araiza, also known as the “Punt God.” That viral nickname has become quite popular, but Josh Allen is not a huge fan of it.

Allen said Monday that he does not really want Araiza’s “Punt God” tag to stick. The quarterback proposed the nickname “Hold God” instead, because he does not want Araiza on the field to punt very often.

Josh Allen just said he wants Matt Araiza to be known as the hold god because he doesn’t want him on the field punting very often.

Pretty solid reasoning from Allen. If the Bills are punting, it means he and the offense didn’t do what they wanted to do, even if it gives Araiza the opportunity to uncork one of his crazy punts.

Regardless of what his nickname turns out to be, Araiza should prove hugely popular among Bills fans. They, like Allen, just won’t want to see him punting too often.

Buffalo Bills quarterback Josh Allen has been paying attention to the viral video Russell Wilson was involved in recently, and couldn’t help but have some fun with it in a recent jersey swap.

Allen and Wilson met after Saturday’s preseason game between the Bills and Denver Broncos and did a traditional postgame jersey swap. Eagle-eyed observers could not help but note that Allen had included the message “#LetsRide” on the jersey he was handing over to Wilson.

For the uninitiated, the meme started in June, when the Broncos posted a behind-the-scenes video of Wilson repeating the phrase while filming promos. That video became something of a running joke due to the various tones and inflections Wilson tried out while taping the video.

Allen appears to be up on the jokes and memes that circulate on Twitter about other NFL players. In this instance, it allowed him to have a little bit of fun with one of his peers.

Josh Allen on Sunday addressed via Twitter his skirmish with a teammate that occurred during Buffalo Bills training camp on Saturday.

Allen was wearing a red no-contact jersey at practice. Despite wearing the red jersey, he was bumped by teammate Jordan Phillips during a 2-point conversion drill. Allen pushed Phillips, and the two were separated (video here).

A day after the incident drew some attention, Allen addressed matters.

Man I love football 😤 the boys got going yesterday, and it’s all love! 😁 First day of pads, just pushing each other to be great ❤️ that is all!

“Man I love football,” Allen wrote. “The boys got going yesterday, and it’s all love! First day of pads, just pushing each other to be great that is all!”

The incident was extremely minor. But since there are cell phone cameras everywhere recording videos and taking pictures, stuff gets shared and circulated much easier. That causes things to receive much more attention than necessary. That was the case with this incident.

Allen is entering his fifth NFL season and looking to send the Bills to the playoffs for the fourth straight year.