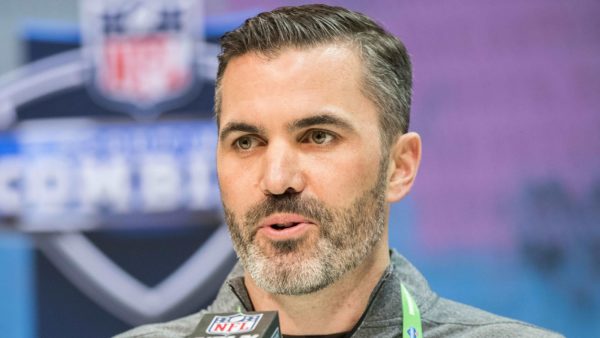 The Cleveland Browns have added another quarterback to their roster.

The news comes the same day the Browns worked out both Rosen and A.J. McCarron.

Cleveland is likely anticipating a significant suspension coming for Deshaun Watson. They have plans to use Jacoby Brissett as their starter in place of a suspended Watson. In addition to Brissett, the Browns have Josh Dobbs on the roster.

Rosen may be a decent option as a third-string QB. But he has proven since being drafted No. 10 overall by Arizona in 2018 that he doesn’t do much good for an offense when he sees playing time.

The last two seasons where Rosen has seen action, he has thrown one touchdown and seven interceptions. As a rookie with the Cardinals, Rosen threw 11 touchdowns and 14 interceptions. The Cleveland Browns are in need of depth at the quarterback position in case Deshaun Watson is suspended, and they hosted two well known veterans on Thursday.

ESPN’s Jeremy Fowler reports that the Browns held workouts with Josh Rosen and AJ McCarron. They also hosted some other veterans as they await a decision on a potential suspension for Watson.

Rosen, the 10th overall pick in the 2018 NFL Draft out of UCLA, signed with the Atlanta Falcons prior to last season after — coincidentally — McCarron suffered a season-ending injury. Rosen spent the year as Matt Ryan’s primary backup.

McCarron was placed on season-ending injured reserve after he suffered a torn ACL in the Falcons’ second preseason game. The former Alabama star has an interesting history with the Browns. Cleveland tried to trade for him in 2017 but botched the paperwork. There was talk that the deal may have been sabotaged after an internal disagreement.

Jacoby Brissett is expected to start for the Browns in Week 1 if Watson is suspended. There was some talk about Cleveland potentially trading for Jimmy Garoppolo, but that sounds unlikely. The San Francisco 49ers on Tuesday waived Rosen. Rosen was behind Jimmy Garoppolo and Trey Lance on the team’s depth chart and competing with Nate Sudfeld for the No. 3 quarterback job.

The #49ers are waiving QB Josh Rosen, source says. Rosen mentioned recently he wasn’t getting enough reps in practice. A chance to latch on elsewhere for the rest of camp now.

During the 49ers’ preseason game on Saturday, Rosen went 10/15 for 93 yards and an ugly interception.

Josh Rosen survived 2 days after making this pass, which may have been 2 days too long pic.twitter.com/cJ0r2GHvxy

When he was drafted No. 10 overall by the Arizona Cardinals in 2018, Rosen said that the nine teams that passed on him made a mistake. Pretty soon, we’re going to find out that the Cardinals and every team to sign him since then are the ones that made mistakes.

Rosen has been bad every time he’s gotten a chance to play in NFL games. Now he’s competing for third-string QB jobs and being cut. He might not last in the NFL much longer with the way he is going.

This is why 49ers signed Josh Rosen off Buccaneers’ practice squad

The San Francisco 49ers made a surprising addition on Tuesday by signing Josh Rosen off the Tampa Bay Buccaneers’ practice squad. It’s not very often that a player gets signed off another team’s practice squad the week of a game. But there were some circumstances that led to the signing.

49ers starting quarterback Jimmy Garoppolo has been out since Week 8 due to an ankle injury. Nick Mullens had been starting in Garoppolo’s place, but he is now out for the season with an elbow injury.

Down to only one quarterback available for Sunday, the Niners needed at least one other option. They found a QB in Rosen, the former first-round pick.

Remember, the 49ers couldn’t sign a free agent because they needed a player who was already in the league’s COVID testing system so that they would be eligible to play on Sunday. The NFL even just approved a new rule that allows teams to add players off another team’s practice squad. The reason for this new rule was clear: they wanted to avoid another Denver Broncos situation. Rosen is already in the league’s testing protocol, which made adding him convenient.

This was awful timing for Johnson, who would have had a shot at backing up in a game on Sunday. But it’s a good opportunity for Rosen, who has bounced around two teams this year but has not gotten any playing time. He’ll just have to learn a new system now.

Josh Rosen was waived by the Miami Dolphins on Saturday, and he will now have an opportunity to learn under the greatest quarterback of all time.

Rosen has agreed to a deal with the Tampa Bay Buccaneers, according to Mike Garafolo and Tom Pelissero of NFL Network. He will begin with the practice squad, however. Rosen could have found a spot on an active roster but opted for a good situation with Tom Brady and Bucs head coach Bruce Arians.

This was all about fit for Josh Rosen, who now gets to learn behind the GOAT with an offensive-minded head coach and an offensive coordinator who believed in him coming out of college. https://t.co/xq8wiqoxN5

The Bucs currently have Blaine Gabbert serving as their primary backup behind Brady. They also have veteran Ryan Griffin. Arians has not ruled out keeping three QBs on the active roster due to the coronavirus pandemic, so perhaps Rosen will make the cut at some point. That may have factored into his decision.

Rosen, who was drafted No. 10 overall by the Arizona Cardinals in 2018, struggled in his first two NFL seasons. He played poorly on a bad Cardinals team as a rookie, and then threw one touchdown and five interceptions in six games with the Dolphins last year.

Josh Rosen waived after Dolphins unable to trade him

Josh Rosen will be looking for yet another NFL team.

Rosen is being waived by the Miami Dolphins after the team was unable to trade him. ESPN’s Adam Schefter reported on Thursday that the team was fielding trade calls on Rosen. That may have been an effort to try and drum up a trade market to get something for a player they otherwise were going to cut.

Miami has Ryan Fitzpatrick slated to start the season, with first-round pick Tua Tagovailoa behind him. Rosen never really seemed to fit into the team’s plans.

Rosen, who was drafted No. 10 overall by the Arizona Cardinals in 2018, struggled in his first two NFL seasons. He hardly produced as a rookie on a bad Cardinals team, and then threw one touchdown and five interceptions in six games with the Dolphins last year.

It’s hard to see Rosen becoming anything more than a backup at this point.

The Miami Dolphins have gotten nothing but positive reports on Tua Tagovailoa’s health since they drafted him back in April, and all of the good news appears to have made Josh Rosen expendable.

The Dolphins have been fielding calls from teams interested in trading for Rosen, according to ESPN’s Adam Schefter.

With Miami’s rookie quarterback Tua Tagovailoa healthy, the Dolphins have fielded trade inquiries in recent days for former first-round pick Josh Rosen, per league sources. In an upcoming weekend of moves, Rosen could be on the move again.

Ryan Fitzpatrick is considered the favorite to start for Miami in Week 1, but he recently left the team due to the death of his mother. Rosen said last week that he is ready to start if called upon. However, the Dolphins’ willingness to trade him seemingly indicates either they expect Fitzpatrick to be back for Week 1 or Tagovailoa would be next in line.

Rosen, who was drafted No. 10 overall by the Arizona Cardinals in 2018, struggled in his first two NFL seasons. He threw one touchdown and five interceptions in six games with the Dolphins last year. His motivation this offseason has been admirable, but he doesn’t appear to be a significant part of Miami’s plans.

The odds of Josh Rosen starting Week 1 for the Miami Dolphins may have shifted a bit due to an unfortunate off-field development.

Ryan Fitzpatrick left the Dolphins’ scrimmage Saturday just before it started upon learning of the death of his mother. Coach Brian Flores said Fitzpatrick would be allowed to take as much time away from he needs. That could include the season opener, which Flores was mum about.

That could open the door for either Tua Tagovailoa or Josh Rosen to get at least one start. Based on reports from camp, the more likely option would be Rosen. That potential scenario is something the third-year pro is ready for.

Josh Rosen on possibility he might have to play in regular-season opener (or any time): "That would be awesome, I'd be ecstatic. It's 2020, anything can happen."

The Dolphins are scheduled to open their season two weeks from Sunday against the New England Patriots.

Rosen was unimpressive for Miami last year, throwing five interceptions and only one touchdown. The supporting cast should be better in 2020, which could help him. Even if it does, nobody views Rosen as Miami’s long-term solution at quarterback.

Only two years removed from being a top-ten pick in the NFL Draft, Josh Rosen is the forgotten man in the Miami Dolphins’ quarterback room. It sounds like he’s determined to find a way to make an impact anyway.

According to Armando Salguero of the Miami Herald, neither Rosen nor his representatives have asked the Dolphins for a trade or release after assessing the situation around the league. The Dolphins are pleased with this outcome, and are reportedly privately pleased that Rosen has bought in and are impressed with his conditioning, work ethic, and efforts to learn new offensive coordinator Chan Gailey’s system.

It speaks well of Rosen that he’s willing to stay and bet on himself rather than seeking an exit route from Miami. For now, the 23-year-old isn’t really in the mix for a job with the Dolphins, as Ryan Fitzpatrick is the stopgap starter while the team awaits Tua Tagovailoa, who is the clear quarterback of the future.

There may be a role for Rosen if Fitzpatrick struggles and Tagovailoa is either not ready either physically or mentally for the starting job. Perhaps that’s what he’s betting on, and is keeping his head down and showing Miami that he’s ready as needed.