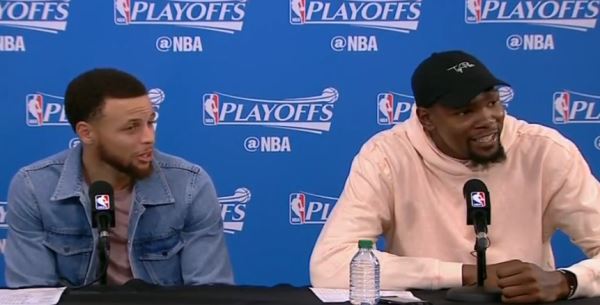 END_OF_DOCUMENT_TOKEN_TO_BE_REPLACED

Karl-Anthony Towns is feeling himself heading into his third NBA season.

In a recent interview with Marc J. Spears of The Undefeated, the Minnesota Timberwolves big man said he believes he can be the best player in the league.

“My confidence has always been so high. I felt coming into the league I could be that easily,” said Towns. “I always knew it was just a matter of time.

“But before I was even drafted, I felt I had that ability, faith and confidence in myself to do that regardless to what team I’m with,” he continued. “I’m very blessed to be with the Timberwolves, because with them I’ve expedited that process a lot.”

It’s a claim that may seem like a stretch to some, but Towns’ development and overall talent at just 21 years old is remarkable. He averaged 25.1 points, 12.3 rebounds, and 1.7 blocks a game last year and can post up, hit a jumper, or go off the dribble, all with equal potency. Towns also has some high hopes for his team as a whole, so you gotta love the confidence heading into the new season.

Karl-Anthony Towns has quite the hot take about his Minnesota Timberwolves for next season.

In an interview with Peter Walsh of SLAM Online that ran on Monday, Towns said that he expects the team to make a deep run in the 2018 postseason.

“I expect us to be in the playoffs and I expect us to compete in the playoffs and have Minnesota rocking not just for one round, but for multiple rounds,” said the former No. 1 overall pick. “We have a lot of faith in ourselves that this is something that we can do and we have a coaching staff behind us and great teammates. I think we have something truly special here.”

Towns made a similar prediction around this time last year.

While he certainly did his part with 25.1 points and 12.3 rebounds per game in 2016-17, the Wolves finished just 31-51, ten games out of the playoffs. They went out and added the likes of Jimmy Butler, Jeff Teague, Jamal Crawford, and Taj Gibson this summer however and have since become a popular sleeper pick in the West. Thus, it’s hard to knock Towns for the optimism about his team.

If Kyrie Irving is on the trade market, then Jimmy Butler and Karl-Anthony Towns want the Timberwolves to get involved.

In an lengthy article discussing Irving’s meeting with the Cleveland Cavaliers to request a trade, ESPN’s Brian Windhorst reported that Butler and Towns have been recruiting Irving to Minnesota. Windhorst further says that the players made the team’s management aware that they want Irving.

The Timberwolves were among the teams Irving reportedly would be open to joining. The Spurs, Knicks and Heat are also on his list.

Even if the Timberwolves want Irving and he has interest in joining them, putting together such a deal is a lot easier said than done.

The Cavaliers would demand a lot of talent in return and require salaries to match up. One player who would make sense in such a deal is Jeff Teague, who was signed as a free agent this month. But he can’t be traded until mid-December because of league rules. The T-Wolves would also only have so much money to go around given what is owed to Butler and Gorgui Dieng, and what Andrew Wiggins would see coming when he is eligible for an extension.

Regardless, just to have their team be a part of these kinds of conversations shows just how far the Timberwolves have come, and that has to be encouraging for the franchise.

Towns was the latest basketball star to react to his NBA 2K18 rating this week, and upon hearing that he had received a 91, his first thought was to his Philadelphia 76ers counterpart Joel Embiid.

“I can’t wait to tell Joel,” said Towns. “I have nothing to complain about.

Embiid, who himself got an 86 rating, was noticeably less pleased with it. But Towns has a rich history of friendly trolling, and throwing Embiid’s “trust the process” line back in his face may be the ex-No. 1 overall pick’s finest work yet.

The All-NBA teams were announced on Thursday and, as usual, there were a few snubs. Among them was Karl-Anthony Towns.

In his second NBA season, Towns averaged 25.1 points (on 54 percent shooting), 12.3 rebounds, and 1.3 blocks per game for the Timberwolves. In another year, that would probably be good enough for a spot on one of the three All-NBA teams. This year, however, was not the year. Here’s who did make it.

After finding out he was not included, Towns took to Twitter with a sleeping emoji.

So we're gonna pretend KAT wasn't suppose to be on any All-NBA?

The way he’s progressing, Towns likely won’t have many more seasons in the near future where he’s not a member of an All-NBA team. He wasn’t the only one to question the selections, though. Draymond Green stuck for teammate Klay Thompson with these comments about it.

Leave it to Crunch the Wolf to drive a wedge between the Minnesota Timberwolves and the family of their franchise center.

According to Michael McCann of SI’s The Crossover on Friday, Karl Towns Sr, the 54-year-old father of reigning Rookie of the Year Karl-Anthony Towns, is considering filing a lawsuit against the Timberwolves for negligence after suffering a significant knee injury in a stunt by the team’s mascot.

The stunt occurred in the second quarter of a home loss to the Indiana Pacers on January 26. The mascot sledded down an aisle in the Target Center during a timeout and lost his balance at the end of the descent, colliding with an empty front row seat that, in turn, struck the right knee of the elder Towns, who was sitting next to the empty seat.

Towns Sr. reportedly suffered “considerable” pain and swelling in the knee. The retired high school basketball coach did wind up staying in the arena until the game was over for fear of affecting his son’s performance with his absence, but he was ultimately brought to a nearby hospital for an MRI.

It’s definitely not the first mascot mishap we’ve seen over the years, but it could certainly prove to be the most costly if a messy legal battle does ultimately ensue between family and team.

The Kentucky men’s basketball team has struggled over its last several games, and even a win wasn’t enough to satisfy John Calipari on Tuesday night. Unhappy with his team’s performance in a 92-85 victory over LSU, Calipari did not hold back in a postgame interview.

“If anybody wants to quit, they can quit,” the Wildcats coach said.

The Kentucky team Towns and Booker played for went undefeated during the regular season, eventually losing to Wisconsin in the Final Four and finishing with a record of 38-1. This year’s Wildcats have lost three of their last five, the most recent of which was an 88-66 blowout at the hands of Florida. Still, it’s not all that common for an alumnus to call out his former program publicly.

It’s no surprise Calipari is frustrated, especially when you see what some of his players were doing toward the end of their latest loss.

Karl-Anthony Towns on Timberwolves playoff hopes: ‘See you in May’

The Minnesota Timberwolves are regarded by many as a team on the rise, and it’s an assessment that Karl-Anthony Towns very much agrees with.

The second-year big man hosted an impromptu Q&A session on Twitter Thursday night, and he was bullish in his prediction for Minnesota this coming season.

@atulbas11 see you in May

It’s been a long time since the Timberwolves made a run at the playoffs, but with new basketball czar Tom Thibodeau running the show and a gifted young core, there is an expectation that Minnesota will take a noticeable step forward this coming season. Some of their longer-tenured players have become frustrated with the stagnation, but this is a franchise that very much appears to be headed in the right direction. May indicates a pretty significant playoff run for a team coming off a 29-win season, so Towns is definitely being bullish, but you have to like the confidence. 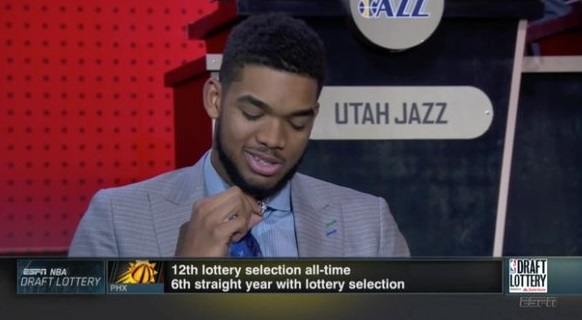