Atlanta Hawks big man Kris Humphries is likely nowhere even remotely close to your list of the most powerful players in the NBA, but he may be shooting his way up the rankings after what transpired on Saturday.

According to a report by Chris Vivlamore of the Atlanta Journal Constitution, Humphries broke a backboard with a dunk during a team practice session at Santa Monica High School in Southern California. The Hawks are in town to play the Los Angeles Lakers on Sunday night.

Humphries posted a message of remorse (as well as an image of the wreckage) to his Instagram account shortly after the incident occurred.

Never had that happen before. Sorry for ending practice early @atlhawks I'm still washing glass out of my hair ??‍♂️

Of course, high school baskets are probably significantly less sturdy than the ones that the pros are used to playing with. But it’s still an interesting feat of strength from the 31-year-old Humphries, who has a history of surprising us with anecdotes of his physical abilities. Somewhere in another universe, perhaps Kris Humphries is right up there with Michael Phelps and Ryan Lochte as America’s finest swimmers.

What could I possibly be talking about? Well, KL Chouinard of NBA.com dug up the results of a series of races in 1995, in which 10-year-old Humphries mopped the floor with both future Olympians. Here’s a sampling:

Childhood @KrisHumphries was a better ? than Michael Phelps. Proof: https://t.co/6y2kpz35PE

Humphries led the field in six different events, including the 200-meter individual medley, which is the same event that Phelps has won four straight gold medals in. He even set three records at his age level, two of which weren’t broken for 18 years.

Not that he could have known how good Phelps and Lochte would become, but why did Humphries step away from the sport when he was beating up on future Olympic gold medalists routinely?

“I was so good at a young age that I got a little burnt out,” he told People Magazine in 2010. “I also grew up in the Michael Jordan era … for me, I watched [basketball] and saw it as a challenge. It’s hard to stay focused on something when you have a ton of success at a young age, so I picked up basketball a little later and rolled with that.”

Phelps just finished competing in his final Olympics — well, supposedly, anyway. Perhaps if things had gone a bit differently, we’d have Humphries stepping aside in his position instead.

A polarizing interview that ABC’s Diane Sawyer conducted with Bruce Jenner aired on Friday night, with the former Olympic star describing himself as a woman. Kris Humphries, who was Jenner’s stepson-in-law for a very brief period, sent a tweet during the interview that sure made it seem like he doesn’t approve.

Man, I'm glad I got out when I did. #Gottadoyou

If you had forgotten that Humphries was once a part of the Kardashian/Jenner clan, that’s probably because the two-month marriage between the Washington Wizards forward and Kim K. was a sham.

Naturally, Humphries was blasted for being insensitive after sending his tweet. He claimed he was misunderstood and spoke out in support of Jenner.

I have and always will support Bruce hence #Gottadoyou. Now recognize I was too vague and sincerely apologize for the way this came across.

Humphries’ initial tweet was definitely about Jenner, no matter what he says. His marriage to Kim and ensuing divorce was an embarrassment that ended with Humphries chasing money. It’s no surprise he’s glad he “got out” when he did.

You can see a portion of the Jenner interview here.

END_OF_DOCUMENT_TOKEN_TO_BE_REPLACED

Kris Humphries is looking to get back something that he lost as a result of his failed marriage to Kim Kardashian. That something appears to be money — in the form of an engagement ring.

According to the Daily Mail, Humphries may have reached a deal to auction off the 16-carat engagement ring he bought for Kardashian at an upcoming Christie’s auction in New York. It is not known for certain if the ring belongs to Humphries, but the description perfectly matches the ring that Humphries gave Kardashian before their fake marriage that duped us all ended 72 days later.

The Lorraine Schwartz ring is expected to bring between $300,000 to $500,000, though initial reports claimed it cost around $2 million.

The item is listed as the “property of a gentleman” and includes a 16.21-carat diamond with the same rectangular cut as the one Kim K. was given. The main stone is surrounded by a 1.8-carat diamond on either side, which adds up to just under 20 carats. The ring Humphries gave Kardashian was said to be over 20 carats, but hey, that also could have been a lie.

For what it’s worth, the auction house also said that a portion of the money the ring brings will be donated to charity by the owner.

We don’t know for sure if the ring belongs to Humphries, but we do know he was reportedly seeking $7 million from Kardashian earlier this year in addition to an admission that their marriage was a sham. It doesn’t appear that they ever squared up, so maybe selling the ring is Humphries’ backup plan. The Chicago Bulls will need energizing performances from their bench throughout the playoffs if they plan to make a deep run. In particular, guys like Taj Gibson need to step up with Joakim Noah battling through a painful case of plantar fasciitis in his foot. Gibson made a big contribution on Thursday night.

He may have only scored four points in Chicago’s 79-76 Game 3 win over the Brookltn Nets, but two of them were game-changers. During what turned out to be a 9-1 run that led to a 12-point lead for the Bulls in the second quarter, Gibson dunked all over Kris Humphries. The United Center went insane.

The Bulls took a 2-1 series lead over the Nets with the win, which is exactly where they want to be after three games. They did their job in splitting the first two games in Brooklyn, and now Chicago will look to take a commanding 3-1 lead on Saturday. If role players like Gibson and Nate Robinson step up, there’s no reason they shouldn’t be able to take the series.

You know what the best part about this news is? We hopefully are done following this absurd story.

Kris Humphries and Kim Kardashian officially finalized their divorce on Friday, a year and a half after Kim initiated the proceedings.

The couple was married on Aug. 20, 2011. Kim filed for divorce 72 days later on Oct. 31, 2011, and they have been arguing over the divorce ever since. Humphries was refusing to grant a divorce and instead wanted the marriage annulled under the grounds that the whole thing was a fraud.

As TMZ first reported, a settlement was reached to finalize the issue. Kardashian got the divorce she was seeking, Humphries does not get the money he demanded, and both parties are responsible for paying their attorneys fees.

The process took 536 days, but Kardashian got what she wanted. At least Humphries has the NBA playoffs to look forward to — Brooklyn hosts Chicago on Saturday.

Lamar Odom and Kris Humphries had a jump ball, and the LA crowd loved it (Video)

When Lamar Odom and Kris Humphries were paired against each other for a jump ball during the fourth quarter of the Clippers-Nets game Saturday, the fact that the two were former brother-in-laws via the Kardashian family was not lost on the Los Angeles crowd.

Initially, Humphries was going to jump against Blake Griffin, but after Humphries kept pointing that Odom was supposed to jump, the officials made the change. The crowd began to loudly cheer, knowing that they were about to see two Kardashian clan members go heads-up against each other on the court.

The Clippers ended up winning the game 101-95 thanks to Chris Paul’s amazing play in the fourth quarter, but the real victors were the savvy crowd members who recognized they were witnessing a great moment in basketball history.

Kris Humphries’ California lawyer reportedly dropped him as a client, allegedly because he disagrees with the NBA player’s pursuit of annulment concerning his marriage with Kim Kardashian.

TMZ reported Thursday that Humphries’ lawyer, Marshall Waller, says there has been an “irremediable breakdown of the attorney-client relationship.”

TMZ says Waller believes there are no grounds for Humphries to pursue an annulment in his marriage to Kardashian because there is no evidence of fraud. He reportedly withdrew from representing Humphries after Kris’ other lawyer stuck with the fraud claim. Humphries will need a new legal sponsor in California.

Stories like this only support Kardashian’s belief that Humphries is dragging out the divorce on purpose to mess with her, which, admittedly, seems like it could be pretty fun. 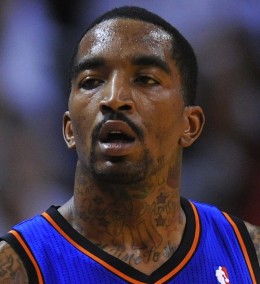 Kris Humphries tried boasting following his team’s win over the Knicks on Monday, but JR Smith put him in place.

Humphries, who had 11 points and 13 rebounds in the Brooklyn Nets’ 88-85 win at Madison Square Garden, bragged on Twitter about his team quieting the home crowd.

“Big game tonight! The Garden got really quiet on the way out!” he wrote.

Knicks guard JR Smith didn’t like what he read, so he hit Humphries back with a Kanye West taunt.

Kanye of course is the new boyfriend of Humphries’ ex, Kim Kardashian. Kris and Kim are still technically married, though they have been separated since Kardashian filed for divorce in Oct. 2011, 72 days after they were married.

Kanye performed at the Hurricane Sandy benefit concert at MSG last month, leading to the well-timed tweet from Smith.

Smith has gotten himself into trouble over Twitter in the past, but he’ll only get laughs from this one. Well played JR, well played.