Kyrie Irving and the Brooklyn Nets were both fined $35,000 by the NBA on Wednesday for violating the league’s media rule.

The NBA announced the news in a press release. They say that Irving’s fine stems from the guard refusing to participate in postgame media availability.

Kyrie and the Nets each fined $35K for violating league protocols re: interviews pic.twitter.com/EQWGtPkyvi

This marks the second time this season that Irving and the Nets have been fined for this reason. Both parties were fined $25,000 in December for Irving not talking to the media. At the time, Irving acted disrespectfully towards the media, calling them pawns.

Irving is making over $33 million this season. He probably wouldn’t even notice $35,000 missing from his bank account. A fine like this will hardly even register on his radar or act as a deterrent.

Stephen A. Smith has been critical of Kyrie Irving this season for the time Irving has spent away from the Brooklyn Nets, and the ESPN personality hinted on Monday that he believes the team deserves at least a partial refund for it.

The Nets’ game against the Timberwolves has been postponed in the wake of an officer-involved shooting that led to rioting in Minnesota. Irving was not going to play in the game anyway, as Brooklyn announced on Sunday that he would miss it for personal reasons. Before the game was postponed, Smith criticized Irving on “First Take” for missing so many games.

What the hell is going on with KYRIE? pic.twitter.com/JUtoH59fli

“You didn’t want people to play in the bubble because you wanted folks to focus on other issues, and it turns out you’ve got your own issues, whatever they may be. … We all hope that everything and everybody is OK, but I don’t recall Kyrie at any point saying, ‘Here’s your money back. You don’t have to pay me,'” Smith said.

“You’re missing games at your discretion. How many personal days do you need? You don’t play every day. You’ve got 72 games this year instead of 82. You only played 20 of the 72 games last year. What the h-ll is going on where you’re just missing games?”

The Nets had said Irving would miss Monday’s game for personal reasons/family matter. Smith acknowledged that the reason is slightly different from his previous absences, but he said his point remains.

For the record, I just became aware of Kyrie’s situation — which is his position. Today’s miss is one thing, but the other two times he was quoted as saying he “needed a break!” He played just 20 games last season and had 9 months off. Damn! Don’t we want to see the brotha play?

Smith openly wondered earlier this year why Irving doesn’t retire. He obviously disagrees with Kyrie taking so much personal time off, and he isn’t the only one.

Irving was ejected from Saturday’s game against the Los Angeles Lakers. It was the first ejection of his career. You can see the video here. Kyrie Irving and Dennis Schroder on Saturday were ejected for what was believed to be the first time in each of their careers. So what transpired that led to their ejections? Many were wondering that.

The ejection took place early in the third quarter of Saturday’s game between the Brooklyn Nets and Los Angeles Lakers, which was missing many star players.

Irving and Schroder began arguing over foul calls and got face-to-face with each other, which led to them getting technical fouls. Then, Irving was assessed a second technical foul for taunting. Schroder got a second as well for taunting Irving by waving at the Brooklyn guard after the ejection.

Kyrie Irving and Dennis Schroder were both ejected after getting into it during the third quarter. pic.twitter.com/i2UEyKba3m

The referees talked with reporters after the game to explain what led to the ejections.

Irving did not speak with reporters after the game, unsurprisingly. Schroder did and said he apologized to his teammates for getting tossed. Schroder was also unsure why he was actually ejected.

Dennis Schroder said he apologized to his teammates for getting tossed. He didn’t realize he got an initial tech with Kyrie, and thinks he got the second for waving bye after Kyrie got tossed.

The Lakers still smashed the Nets 126-101 even though they were playing without LeBron James and Anthony Davis. Newcomers Ben McLemore and Andre Drummond had big games for the Lakers. 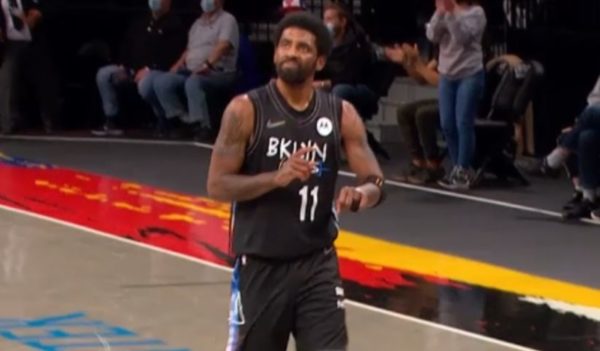 Kyrie Irving has played extremely well for the Brooklyn Nets since the All-Star break, but the star point guard will not be with the team for at least their next three games.

The Nets announced on Monday that Irving will not be accompanying them for their three-game road trip this week. Irving will take some time away from the team to “tend to a family matter.”

This is the second time this season that Irving has left the Nets for reasons other than injury. He did not provide an explanation the first time until he returned to the team, at which point he said he had “a lot of family and personal stuff going on.” Irving had also been boycotting the media at that point.

Irving is having a great season with 28.1 points, 5.7 assists and 4.8 rebounds per game. However, he always seems unhappy and is constantly expressing his disdain for the media in a variety of ways.

The Nets entered Monday with a record of 29-14 and in second place in the Eastern Conference.

Kyrie Irving thinks his interactions with some of his former teammates on Thursday night is proof that previous reports about him are wrong.

Irving played in Boston for two seasons before leaving the Celtics for the Nets in free agency in 2019. He’s now in his second season with Brooklyn.

Throughout his final season with the team, and after he left, there was plenty of criticism surrounding his leadership. One prominent Celtics player seemed to take aim at him. A former Celtics player said Irving was a “bad leader” and “disrespectful.”

But Irving shared some hugs with his former teammates after the Nets beat the Celtics on Thursday night. He believes that proves all the previous stories and reports were wrong.

“Big surprise, huh?” Irving said after the game. “To a lot of people? All that (expletive)-talking about me and all the relationships I have with every teammate of mine. I’m glad we get to see it every single game that I’ve got some great people out here.”

Don’t worry, Kyrie. Being cordial with some former teammates doesn’t suddenly mean everything was rosy. It doesn’t erase the questioning of coaches or the year of rumors you were going to leave the team. None of that changes.

Despite some outside doubts about he might fit in with the Brooklyn Nets, James Harden appears to be doing just swimmingly on that front.

Mike Mazzeo of Forbes reported on Wednesday that Harden has been very humble ever since his arrival in Brooklyn, displaying a willingness to put the team first in their pursuit of an NBA title. Mazzeo adds that the former MVP has gotten along very well with Kyrie Irving, describing Harden’s presence as “a calming influence” on the mercurial Irving.

Harden has indeed taken on a more facilitatory role for the Nets alongside Irving and Kevin Durant. He is averaging 11.4 assists per game in Brooklyn (which would be a career-high) and is taking just 16.6 shots per game (his lowest number since the 2013-14 season). Harden has been happy to defer to Irving and Durant when they share the floor together and to carry bench-heavy units when his star teammates sub out of the game.

As for Irving, he is still finding ways to cause problems on his own. But it sounds like Harden is one of the few teammates who has actually been able to get through to the infamously difficult guard.

A pawn at All-Star Weekend is apparently still a pawn in Kyrie Irving’s eyes.

The Brooklyn Nets star skipped out on his scheduled All-Star media session on Sunday. Marc Berman of the New York Post notes that Irving could face punishment from the NBA for the no-show. All 24 All-Stars were required to speak with the media in the late morning or the early afternoon on Sunday since they were permitted to arrive on Saturday night instead of on Friday.

The seven-time All-Star Irving has made a big stink this season about his disdain for speaking with reporters. He briefly boycotted the media outright in December, leading to a $25,000 fine from the NBA. Irving also drew a separate $50,000 fine from the league in January for violating health and safety protocols while on a midseason sabbatical from the Nets.

Those still champing at the bit to hear what Irving has to say need not fear however. The 28-year-old remains plenty outspoken on social media.

Kyrie Irving is not playing in the Brooklyn Nets’ game on Saturday night due to a shoulder injury, but the situation does not sound serious.

Nets head coach Steve Nash talked prior to the game about Irving’s absence.

Irving missed significant time last season due to a shoulder injury, which is why there was some concern. But it sounds like the Nets are just giving Irving a day off.

Kyrie Irving (right shoulder – injury recovery) is out for the #Nets. #NBA #Mavs

The Nets were the hottest team in the NBA entering Saturday’s game against the Mavericks. They entered the game on an 8-game winning streak and are closing in on the top spot in the Eastern Conference. They’re also said to be pursuing one of James Harden’s former Rockets teammates.

Kyrie Irving will say almost anything for attention, so it’s no surprise that his latest act is to argue for the NBA to change the logo.

The notion of discussing whether the logo should be changed is fine. The humble Jerry West has even said he wants the logo to be changed. But what is not acceptable is the racist language and racist argument Irving uses for making such a change.

In his Instagram post saying the NBA should change the logo to Kobe Bryant, Irving said in all caps “BLACK KINGS BUILT THE LEAGUE.”

That is dangerously racist language and racist reasoning. The logo should be changed because black kings built the league, he says.

Using race as a motivating factor in this reasoning is terrible. A white athlete saying anything remotely close to this might see their career end. It should be no more acceptable for Irving to use this language or argument.