Former Washington Wizards coach Scott Brooks looks set to land on his feet somewhere, potentially as an assistant on an NBA title contender.

According to Marc Stein of ESPN, Brooks interviewed with the Los Angeles Lakers about a potential role on Frank Vogel’s staff.

A former Coach of the Year with the Oklahoma City Thunder, Brooks’ contract was not renewed by the Wizards after a 34-38 season and a first-round playoff loss to Philadelphia. Brooks is well-liked by players and has extensive experience, but his name hasn’t shown up as a rumored candidate for any of the other jobs that remain open.

The Lakers appear to be expanding Vogel’s staff, which already features former NBA head coach Lionel Hollins. They recently added another well-known name to their staff, and Brooks may be next. The Los Angeles Lakers are adding an experienced coach to their staff, as they have agreed to a deal to hire David Fizdale.

Fizdale was pursued by several teams for lead assistant jobs before he decided to join Frank Vogel’s staff, according to ESPN’s Adrian Wojnarowski.

Fizdale was an assistant coach under Erik Spoelstra when the Miami Heat won back-to-back titles in 2012 and 2013, so he has a relationship with LeBron James. Fizdale was extremely popular among Heat players, and LeBron and Dwyane Wade publicly supported him when he was fired by the Memphis Grizzlies several years ago.

After falling short thanks in large part to key injuries this season, the Lakers are looking to retool and get back on track. Their roster will need some tweaking, but adding Fizdale to the coaching staff is a good start to their offseason.

Fizdale, 47, last coached when he was the head coach of the New York Knicks two seasons ago. Many prominent NBA people ripped the Knicks for making Fizdale a scapegoat, which was another sign of how popular he is around the league.

Report: Jason Kidd could bring Lakers assistants with him to Mavs

Jason Kidd needs to assemble a coaching staff to assist him with the Dallas Mavericks, and he could raid his current staff in order to fulfill his needs.

Kidd was hired on Friday as the next coach of the Mavericks. Southern California News Group’s Kyle Goon reports that sources told him Kidd could look to the Lakers’ staff to fill out his staff.

Kidd, 48, has previous head coaching experience with the Nets and Bucks. He has been an assistant with the Lakers since 2019, a year after his firing by Milwaukee.

LeBron James isn’t getting any younger, and Magic Johnson thinks time is running out for him to win a second title with the Los Angeles Lakers.

In an appearance on ESPN Radio’s “Keyshawn, JWill and Zubin,” Johnson said he believes James has two more years to succeed with the Lakers before his window closes.

“I think to me he has two hard years,” Johnson said. “I’m talking about, ‘listen, we gotta get it done in these two years that I can still just be a man out here dominating, playing great.’ The Lakers, we got to get some pieces around here for these two years. In another year, (Kevin Durant), it’s going to be his turn.”

Johnson added that he believes James should be moved off the ball to make his role less demanding, and add at least another shooter to take some pressure off the Lakers star.

James raised some eyebrows late in the season with some comments he made about his long-term health, though he later suggested the reaction to that was overblown. Overblown or not, James turns 37 in December and dealt with some legitimate injury issues this past season.

The core of James and Anthony Davis will be intact as long as James sticks around. Johnson is certainly right that the Lakers need some extra pieces around them that can threaten from the perimeter. That was what the team hoped Dennis Schroder could do, but it’s safe to say Magic doesn’t think that move worked out.

A key change to the Los Angeles Lakers’ ownership could have significant repercussions down the road.

As first reported by Sportico, Lakers minority owner Philip Anschutz agreed to sell his stake in the organization to an unknown buyer. Anschutz, a billionaire, had owned a 27 percent stake in the franchise.

Anschutz owns 27 % so this is a large chunk of a $5+ billion franchise. Buss family has 66 % so nothing changes for Lakers ownership now. Just minority new partners. Big long term question is whether Anschutz’ first right to purchase (if Buss family ever sells) transfers in sale. https://t.co/7sZYHXGUFt

As noted, while nothing changes at the moment, Anschutz had the first right to purchase majority ownership if the Buss family ever decided to sell. It is unclear if that will transfer, and who it will transfer to.

Jeanie Buss remains the controlling owner of the team, and it’s obvious that she doesn’t plan on going anywhere. This could still provide for some interesting speculation, especially if Anschutz’s shares are bought up by a notable entity. 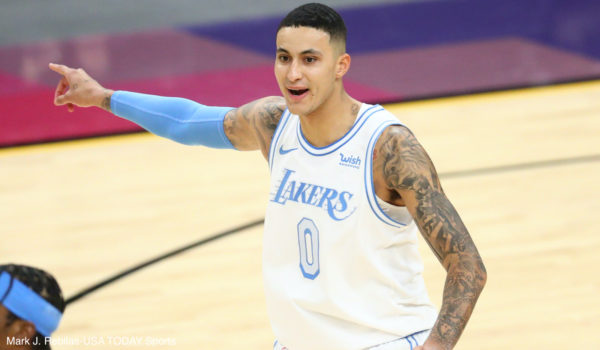 There have been rumblings that the Los Angeles Lakers could explore possible trades involving Kyle Kuzma this summer, and the big man might be buying into the rumors.

Kuzma, who signed a three-year, $40 million contract extension late last year, has removed the Lakers from his Instagram profile. Fans and followers noticed that he no longer has “@Lakers” in his bio.

It’s unclear if that is Kuzma’s way of sending a message, but the change is noteworthy.

The Lakers seemed committed to Kuzma at one point. He was their one notable young player whom they did not send to the New Orleans Pelicans in exchange for Anthony Davis. However, some feel Kuzma has hit a wall. The 6-foot-10 forward averaged just 12.9 points per game this season. He had increased opportunities when Davis and LeBron James missed significant time with injuries.

Kuzma’s contract extension, which kicks in next season, is viewed as team friendly. That could make him easier to trade if the Lakers decide to go that route.

Los Angeles Lakers fans are getting excited over some Instagram activity involving the wife of Russell Westbrook.

An Instagram user pointed out that Anthony Davis and LeBron James are now following Nina Westbrook on Instagram. Nina is Russell’s wife.

Westbrook just completed his first season with the Washington Wizards. The team rallied to make the play-in and secured the No. 8 spot in the playoffs, where they lost to the 76ers in five games.

Westbrook seemed to enjoy playing for the Wizards. But they just parted ways with Scott Brooks as their head coach, who was a staunch Westbrook backer.

Westbrook is set to make $44 million next season and has a player option for $47 million the following season. Would he be open to a trade away from the team? The possibility of playing on a championship contender like the Lakers might intrigue him. It would also bring him back home to Southern California.

Now, the chances of the Lakers being able to swing a trade for him seem low. They would need to stretch to get the financials to line up. Kentavious Caldwell-Pope, Kyle Kuzma, and some second-round picks would probably need to go. Montrezl Harrell would probably need to pick up his option and be included, but that seems unlikely.

Still, this might not stop AD and LeBron from beginning their recruitment.

Montrezl Harrell hints at departure from Lakers on Instagram Montrezl Harrell may ultimately end up being a one-and-done with the Los Angeles Lakers.

The former Sixth Man of the Year took to Instagram on Tuesday to post what sounded like a potential farewell to the team. Harrell said that he was grateful for the season he had but admitted that “the road was rocky.” He ended his post by saying, “Thank you Lakersnation and The Purple and Gold Franchise for allowing me to add another page in the book of Trezz.”

Harrell, 27, signed a two-year, $19 million with the team last summer and has a $9.7 million player option for next season. At the time, the deal was widely seen as well below his market value. But Harrell struggled to make an impact with the Lakers. His averages fell across the board from 2019-20, and he fell out of the team’s rotation entirely by the playoffs.

The Lakers also got eliminated in the first round, further adding to Harrell’s disappointment. Few would blame him if he does end up leaving. Perhaps this team that was interested in Harrell last offseason will circle back to him. The Los Angeles Lakers are facing an offseason full of questions, but general manager Rob Pelinka hinted that major changes may not be coming.

On Friday, Pelinka said he still thinks the roster is championship-caliber when healthy, and that he wants to keep the “core group” in place.

“I’m convinced that, again, without some of the unforeseen circumstances this year, the challenges that we had to face, that we’d be a championship-caliber team,” Pelinka said, via Dave McMenamin of ESPN. “So the goal is to try to keep that core group together.”

It’s open to interpretation what Pelinka would consider his core. It certainly includes LeBron James and Anthony Davis, but beyond that, it’s not clear. There’s also not much guaranteed to be coming back beyond that, as outside of James and Davis, only Kentavious Caldwell-Pope, Kyle Kuzma, and Marc Gasol have guaranteed deals for 2021-22. The rest of the supporting cast could look entirely different.

Pelinka has some key decisions ahead. One of them involves guard Dennis Schroder, who is an unrestricted free agent that one Laker icon clearly doesn’t want back.

Los Angeles Lakers guard Dennis Schroder has been under a microscope lately with his poor play in the first round against the Phoenix Suns. Now he may be giving Laker fans another reason to be concerned.

Schroder apparently removed a reference to the Lakers from his Instagram bio this week, specifically one that referred to himself as “PG for the Los Angeles Lakers.”

Dennis has removed “PG for the Los Angeles Lakers” from his bio pic.twitter.com/WnX0G49CIg

The 27-year-old Schroder will be an unrestricted free agent after the season. He has really struggled during the Lakers’ series against Phoenix and is coming off a scoreless dud in the team’s blowout Game 5 loss on Tuesday.

It is worth noting that Schroder had some similar activity on Instagram prior to his departure from the Atlanta Hawks in 2018.

Granted, there is not much reason for Schroder to be loyal to the Lakers. He was not on their championship team last season and did not choose to go to LA, having been acquired in a trade. We also recently heard that Schroder may be unhappy with his role on the Lakers. Combined with this possible Instagram clue, he may just be wearing a different uniform next year.