The Miami Heat have had to adjust their scouting efforts a bit in light of Joel Embiid’s injury.

Miami’s second-round opponent, the Philadelphia 76ers, will be without Embiid for at least the start of the series. That means the Heat have to adapt on the fly to a team that will be led more by James Harden. One complicating factor is that Harden did not play much without Embiid since being acquired by the 76ers, making game tape scarce.

Heat coach Erik Spoelstra said the team has a secret weapon in the form of former Harden teammate PJ Tucker.

With limited 76ers film on Harden in these situations without Embiid, Spoelstra said Heat has looked back at some of Harden’s Rockets film when usage rate was among the top in the NBA. Spoelstra said Tucker’s familiarity with Harden as his former Rockets teammate has also helped.

Tucker is turning into a key cog of a lot of really good teams. The Milwaukee Bucks used him to bother Kevin Durant on the way to an NBA title last season, and his defense will likely be needed in this series as well. He’s been around a while and played for five different teams, so he’s widely familiar with the league.

The Heat open their series against the 76ers on Monday. Tucker seems likely to play a significant role for them if this is any indication.

Butler and the Heat drew an unusual fine from the league Thursday, per Ira Winderman of the South Florida Sun Sentinel. Butler was fined $15,000 for making “an obscene gesture” when he did a thrusting motion on the bench during Tuesday’s series-clinching victory over the Atlanta Hawks. The Heat also got fined a separate $15,000 for turning the moment into a GIF and posting it in a since-deleted tweet to their official page.

Here was the moment that led to the fine.

Butler had a funny response to the fine on Instagram, calling on the NBA to announce teammate Tyler Herro as Sixth Man of the Year alongside the fine.

There has been some precedent this season for the NBA fining star players because of obscene gestures. But for Butler to get fined over a game he was not even playing in (and for the Heat to draw a separate fine for a post on social media) is certainly not something that you see every day. Carmelo Anthony might not be the NBA’s most famous Melo any more (thanks LaMelo Ball), but he may still have something interesting up his sleeve in free agency this summer.

Sean Deveney of Heavy.com reported this week on the ten-time All-Star’s options as an unrestricted free agent. Deveney notes that Anthony’s starting point would be to potentially re-sign with the Los Angeles Lakers since Anthony has a certain comfort level with living and playing in L.A. But Deveney adds that Anthony’s situation is wide-open and mentions the Nets as another option for the Brooklyn native Anthony. Additionally, Deveney says that the Miami Heat and Boston Celtics are in the mix as dark horses for Anthony.

Though he will turn 38 next month, Anthony averaged a decent 13.3 points and 4.2 rebounds in 26.0 minutes per game for the Lakers this season. He has been comfortable playing in a bench role for the last couple of years and might still have some value as a gunner on a contender.

That said, Anthony’s ego still manifested itself in other ways this year. Any interested team would thus have to accept both the good and the bad when it comes to Me70. 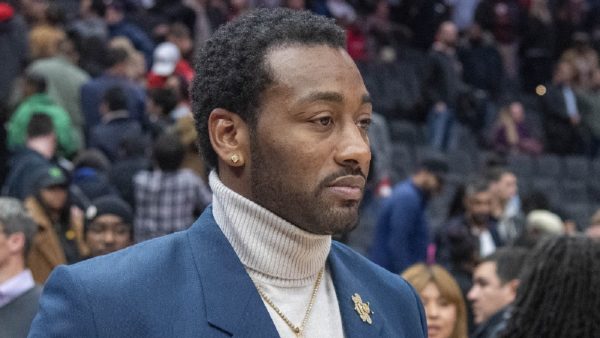 John Wall may be getting rewarded for his season-long NBA exile.

Bleacher Report’s Jake Fischer reported on Thursday that all signs point to the ex-All-Star point guard Wall revisiting buyout talks with the Houston Rockets if they are unable to find a trade for him by the NBA Draft in June. Fischer adds that both the LA Clippers and the Miami Heat have been mentioned by league sources as strong possible landing spots for Wall.

The 31-year-old Wall did not play all season for the rebuilding Rockets. He was also unable to secure a trade or a buyout from the team because of the bloated amount still left on Wall’s contract. Either might be more feasible now come this summer however since Wall will only have one year left on his deal (albeit for $47.4 million).

The Clippers, who should be one of the title favorites next season, would be an excellent fit for Wall. They did not have a true backup point guard behind Reggie Jackson this season, instead relying on wings like Terance Mann and Norman Powell or even big men like Isaiah Hartenstein to run the offense for the second unit. The Heat are a bit more set at point guard with Kyle Lowry, Tyler Herro, and Gabe Vincent. But they are another top contender in the East and may be appealing to Wall for a number of other reasons too. The Heat guard was noticeably absent from the team’s 2021-22 snapshots, which were taken a day ahead of their playoff opener on Sunday. All other players, coaches, and staff were present for the photo, even including two-way players Javonte Smart and Mychal Mulder.

Anthony Chiang of the Miami Herald reported the reason for Oladipo’s absence — the veteran guard did not make it in time for the photo, which was taken before practice. Oladipo was on time for and participated in practice however.

The two-time All-Star was indeed seen shooting around at practice.

Doesn’t look like Victor Oladipo was in the team photo but he was at practice today. pic.twitter.com/quiAU538CU

Oladipo returned from injury for the Heat in March. He had his best game of the year in the team’s regular season finale, scoring 40 points (albeit as Miami rested most of their regulars). Oladipo is on a one-year deal though and will be a free agent after the season.

It is not clear why the Heat did not wait until Oladipo arrived to take the photo or even hold the session after practice instead. Regardless, at least this is not the weirdest thing to happen with an official team photo.

Jimmy Butler has message for rest of NBA

Jimmy Butler is putting the rest of the NBA on notice.

Butler’s Miami Heat went through a rough stretch recently where they lost four in a row. But they broke that losing streak with a 123-100 win over the Sacramento Kings on Monday night.

After snapping the losing streak, Butler spoke with the media. He touted his team.

Jimmy Butler: I feel like we put together this roster to win a championship. It feels like a championship caliber team. When we’re clicking, I think we’re going to be tough to beat. pic.twitter.com/FerHxcLsmr

The Heat reached the NBA Finals during the pandemic-altered 2020 season. Last year they lost in the first round of the playoffs. But Miami enters a big game Wednesday against the Celtics holding the top spot in the East. They seem to have many of their communication issues worked out, which should be a positive sign moving forward. Butler certainly is confident about matters. The Miami Heat had a surprising reaction to the public altercation between Erik Spoelstra and Jimmy Butler that occurred during a loss last week.

Spoelstra and Butler were involved in a confrontation that involved Udonis Haslem stepping in between the men. The incident took place during a timeout while the Heat were getting crushed by the Golden State Warriors (video here).

Though the incident was a poor reflection for the Heat, the team reportedly is turning the incident into a positive. Five Reasons Sports, which covers the Miami pro teams, says the public fight has helped open communications between Spoelstra and Butler.

The sideline incident, while not something the organization wanted, was a rare time this season that the communication was that clear & open. The organization still strongly supports Butler, even while acknowledging he (like many stars in Heat history) has "difficult" moments….

Five Reasons Sports also says the Heat have had “other issues behind the scenes” this season.

There have been other issues behind the scenes this season that did not involve Butler, but the team believes it has a handle on those also…..

This isn’t surprising. Teams that play an entire season are going to experience some moments where it’s not all harmonious. Maybe the blowup will help the Heat in the long run. They finally won on Monday to break a 4-game losing streak that included the loss to Golden State.

Erik Spoelstra did not coach in Saturday night’s Miami Heat game, and a reporter revealed the reason why.

Heat reporter Ira Winderman, who covers the team for the South Florida Sun Sentinel, said that Spoelstra was away from the team due to a medical procedure involving one of the coach’s two sons.

Heat update that Erik Spoelstra is away from the team due to a medical procedure for one of his two sons.

That explains it. Spoelstra also missed games when both of his sons were born.

Chris Quinn coached the team in Spoelstra’s place on Saturday night. They lost at home to Brooklyn 110-95.

The game marked Miami’s second since an infamous incident broke out between Spoelstra and Jimmy Butler during a loss to the Warriors.

Bradley Beal could sign with top NBA team this summer? Bradley Beal has about as much chance of winning a championship with the Washington Wizards as he does of getting to the moon by flapping his arms. A very alluring alternative could be emerging for him this summer however.

Shams Charania of The Athletic reported on Monday that the Miami Heat are seen as a legitimate suitor for the star shooting guard Beal if he decides to leave Washington. Charania adds though that the Heat would need to complete a sign-and-trade in order to land Beal.

The three-time All-Star Beal has spent his entire career with the Wizards. But he will turn 29 in the summer and does not appear to have a legitimate path to title contention in Washington. Beal also attended the University of Florida for college and can become a free agent this offseason by turning down his $36.4 million player option for 2022-23.

Beal has notably declined to sign a contract extension with the Wizards to this point, and that has led to some other wild rumors about where he might be headed next if he leaves. The Heat, meanwhile, own the best record in the East this season at 47-24 and are poised to compete for several more years to come. There have also been some signs that Miami could be willing to trade away the star shooting guard that they have right now.