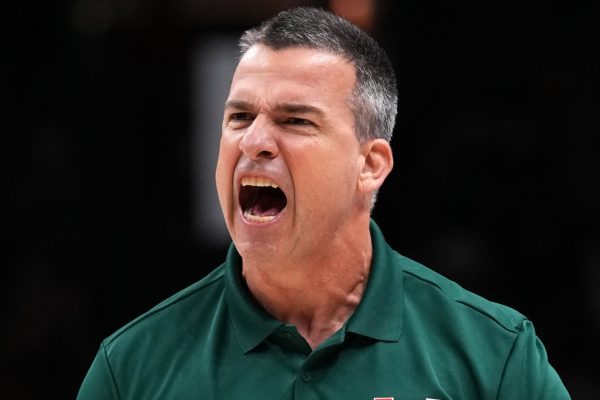 The Miami Hurricanes held their spring game on Saturday and already fans are getting a bit antsy. No more than a few series into the scrimmage, the boos began to reign down on Miami players.

The frustration stemmed from several dropped passes that came off the arm of quarterback Tyler Van Dyke.

Wide receiver Key’Shawn Smith was the first to draw ire when he dropped a would-be 45-yard completion. Running back Henry Parrish and slot receiver Xavier Restrepo then followed that up with a pair of drops of their own before wide receiver Frank Ladson, a Clemson transfer, capped things off with a drop in the endzone.

“When you have a quarterback like [Tyler Van Dyke], you have to find a way to get them the ball,” head coach Mario Cristobal said, via the Miami Herald. “We must find a way to come down with those passes.”

The good news is that Miami was very shorthanded on Saturday. Upwards of 16 players who are expected to see significant snaps this season did not participate, which led to mismatches on the field. The lack of rapport didn’t help, either.

Miami still has plenty of time to clean things up before the season begins. And they hope this case of the dropsies is little more than a speedbump on the road.

If it’s not, they can expect to hear a lot more booing. Few people know how to rally the troops quite like Michael Irvin.

“The Playmaker” spoke at an All Canes party Friday night to fire up Miami Hurricanes fans before Saturday’s game against the rival Florida Gators. The former Hurricanes star receiver went nuts on stage and brought all the energy. Dude looked like a jacked up wrestler cutting an old school WWF promo.

I need MORE Michael Irvin in my life. I need an app that plays videos of Irvin hyping me up to get out of bed every morning. This guy is unbelievable.

Is there any wonder why Irvin won a national championship with Miami in 1987 and later won three Super Bowls with the Dallas Cowboys? Teammates were probably ready to run through walls for him. I know I would.

Not only did the Hurricanes defeat Florida State on Sunday 80-74, but their fans also scored another victory in the form of a humorous taunt.

There is currently a "Jimbo left you" chant going at the Watsco Center right now. Yes, for real.

That is a reference to the Seminoles’ former football coach, Jimbo Fisher, leaving the program for Texas A&M.

Miami fans better watch their taunts. We know things are looking up under Mark Richt while FSU is transitioning to Willie Taggart, but let’s not forget who’s won almost every rivalry football game between the teams this decade.

A woman has been charged with a felony for slapping a police officer at the Miami-Virginia Tech game on Saturday.

The woman, identified as 30-year-old Bridget Freitas, was allegedly causing a disturbance and was asked to move to the concourse. She refused to move and instead sat on the stairs, leading officers to carry her away. Video showed police carrying her up the stairs. She slapped an officer in the face, who reacted by hitting her.

A Miami-Dade Police Detective told the AP that Freitas has been charged with felony battery on a police officer and misdemeanor disorderly conduct.

The police department is also reviewing the video to make sure proper procedure was followed.

College football recruiting can be a dirty business, and we got another taste of that this week when Florida had to address rumors of a violation. The twist is that a Miami Hurricanes fan says he/she was responsible for creating the story.

Things got started when someone posted on the Rivals message board that the Gators were facing serious trouble from the NCAA after a recruit recorded video of two Gators coaches offering him cash. The allegation — which was a troll job — got picked up and shared on Twitter, and then went viral.

According to SEC Country, the rumor was so significant that Miami coaches reached out to Florida commits to see if they wanted to reconsider their commitments to Florida in light of the alleged violation. Florida coaches then supposedly messaged their recruits to tell them the rumor was false.

They were absolutely correct.

On Thursday night, a Miami fan admitted on Canes Insight that he/she created the rumor.

Guys, this was a massive troll job executed to perfection by none other than myself. I posted this beauty on the Rivals Mainboard on Wednesday night. To be honest, I thought I was a rather obvious troll, but the @UGArecruiting twitter handle picked up my post and tweeted it out. That caused it to go viral, and now everyone is talking about it across multiple sites.

If anyone had actually done any digging before spreading the rumor, they would have realized that Florida wasn’t recruiting any prospects from Homestead High, as was alleged in the rumor. But they didn’t and the story went viral, causing people on both sides to react.

College football recruiting is a dangerous game with lots of sketchy characters. And even though this story was proven false, you can never rule anything out, especially when this happened to a Florida coach a few years ago.

National Signing Day is only a few days away. Whitfield said that players sitting above the tunnels would spit and try to time it so that the spit would hit the players.

Here’s a video of Whitfield talking about it via Tomahawk Nation:

Kermit Whitfield said as the team was walking into the tunnel, a Miami fan tried to spit on them. #FSU #Noles pic.twitter.com/JHTQFJcDok

Though this example seems extreme, Miami fans did get a little rowdy during the game. They also threw debris onto the field in protest of an ejection. Miami Hurricanes fans were furious about a targeting call in the fourth quarter of their game Saturday against Florida State and responded by littering the field with debris.

Jamal Carter was called for targeting on a third down play that extended FSU’s drive in the fourth quarter, resulting in his ejection.

Miami fans litter the field in protest of that horrendous targeting call. pic.twitter.com/nAex3JoLTo

That was a questionable call and turned what would have been a 3-and-out situation from the Seminoles into a first down. Miami fans are making it clear who they want to see take the reins at Miami.

And banner watch returns to Miami games. The first? "We need a coach not a 27-47 'recruiter' #saynotomario" pic.twitter.com/pDWVG4ksnE

Miami fans have been flying banners over the stadium begging for Davis since the start of the season when Al Golden was still in charge. Why stop now when the dream is closer than ever? Florida State had Saturday off after beating Boston College on Friday, so assistant coach Tim Brewster decided to spend part of his day trolling one of his school’s rivals.

Brewster, a former Minnesota head coach now coaching tight ends for the ‘Noles, took a shot at Miami over the poor attendance at Sun Life Stadium for Saturday’s game between the Hurricanes and Nebraska Cornhuskers:

Wow….Is anybody at Miami game??

This is nothing new for Brewster, who has trolled Miami many times in the past. It’s all part of the recruiting wars in Florida. And based on how he acted as a head coach, nobody should be surprised with the things Brewster says on Twitter as part of the FSU staff.

But as the photo at the top taken by LBS friend A. Frish shows, the crowd wasn’t that bad.

Since taking over as the head coach of the Miami Hurricanes football program prior to the 2011 season, wins haven’t come with the frequency fans expected. As a result, more than a few fans in south Florida have been calling for Golden to be relieved of his duties.

Prior to Friday’s game against Florida Atlantic, a banner flew over FAU Stadium indicating it’s time for someone else to patrol the sideline. “Make Miami Great Again — Butch Davis 2016” it read.

As the banner flew overhead, Golden caught a glimpse of it. And, while he didn’t have much of a reaction, the hanging of the head pretty much says it all.

The moment Al Golden sees the banner plane calling for Butch to come back. pic.twitter.com/7e6cDvOGHO

The Hurricanes are 29-22 under Golden since 2011, which wouldn’t be bad at some schools. However, the team is 16-16 in ACC play and 0-2 in bowl games. To make matters worse, seven Miami players were selected in this year’s NFL Draft, leading many to wonder (rightfully so) how last year’s team finished below .500 at 6-7.

Those who paid for the banner have eyes on Butch Davis, who last coach Miami in 2000, as the ideal replacement. During his six seasons in charge, the Canes went 51-20 (33-9 Big East) and were a perfect 4-0 in bowl games. Since then, Davis was fired from his job as head coach at North Carolina after the NCAA investigated the program for improper benefits and academic misconduct. He also served as an assistant to Greg Schiano with the Buccaneers.