Jalen Hurts and the Miami Hurricanes appear to have mutual interest.

Hurts has entered his name in the NCAA’s transfer portal. Since he graduated in December as a junior, Hurts still has one year of eligibility remaining and could play immediately upon transferring.

With Hurts expected to leave the Alabama program, he should have no shortage of potential suitors. Among them could be Miami. Hurts has followed Hurricanes head coach Manny Diaz and tight ends coach Brevin Jordan on Twitter.

Hurts was the SEC Offensive Player of the Year as a freshman and went 26-2 as a starter at Alabama. He helped the Crimson Tide to two appearances in the College Football Playoff National Championship. Hurts was replaced during last year’s title game in favor of Tua Tagovailoa, who was named the starter for the 2018 season.

Miami landing Hurts would be a huge get for Diaz and his coaching staff. However, Diaz will have to make quite the recruiting pitch because Hurts will be a wanted man, as reports say Oklahoma and Florida State are also on Hurts’ list. Just a few days after Miami was demolished 35-3 by Wisconsin in the New Era Pinstripe Bowl, Hurricanes head coach Mark Richt has announced he is stepping down.

Richt said in a statement on Sunday morning that he is retiring from coaching. He thanked the university and made it clear that the decision was his alone and he was not pushed out.

A report after Miami’s bowl loss indicated Richt was open to making offensive changes with the program, as he had not been able to replicate the pro-style offense at Miami that he ran with so much success at Georgia. The Hurricanes were among the worst FBS programs this year in total offensive yardage and passing yards per game.

While Richt’s third season with Miami was a disappointment, the 58-year-old’s decision to step down is a major surprise. He took the Hurricanes to the Orange Bowl last year and appeared to be a good quarterback away from having a national championship contender. While Richt says he is retiring, it would not be a surprise if we see him coaching again in the future.

Miami’s offense seems to have fallen behind the times, and Mark Richt may be showing a willingness to adjust.

A day after the Hurricanes got crushed 35-3 by Wisconsin in the New Era Pinstripe Bowl — leading to ridicule no less — The Miami Herald’s Barry Jackson reported that Richt is open to looking into changes to fix the offense.

According to Jackson, changes Richt is considering include: a new offensive coordinator, new offensive assistant, and even a schematic change.

Richt is known for running a pro-style offense, which he did successfully at Georgia with quarterbacks such as Matthew Stafford and Aaron Murray. However, he has not been able to replicate the same success for the Canes.

Whether it’s been Malik Rosier or N’Kosi Perry, Miami has struggled with its quarterback play all season. Rosier seemed like a weak spot even during the team’s 10-3 season last year. The Hurricanes are among the worst FBS programs this year in total offensive yardage and passing yards per game. Changes are needed.

10 college football teams in need of a bowl win

Some bowl games simply mean more than others, and some teams have had to deal with more chaos on and off the field this season than others. That all culminates during bowl season, when several teams will compete in non-playoff bowls simply for bragging rights and a victorious end to the season.

For some teams, this means more. Outgoing coaches, momentum for the future, and a silver lining to a disappointing season are all potential incentives for teams contesting these games. We’ve excluded the two College Football Playoff semifinals, as the incentive for victory there is quite obvious, but the other games have their fair share of storylines as well. Here are ten teams that could really use a bowl win to cap off their season.

The Wildcats can be pretty satisfied with what they’ve done this season no matter how the Citrus Bowl goes for them, but a win over Penn State would be an excellent way to cap off the year. Kentucky would get to ten wins if they can win this game, the first time the program will have done so since 1977. They probably should have gotten there already, but an upset loss to Tennessee made the task harder than it had to be. They’d hate to miss out on that landmark on account of that defeat.

END_OF_DOCUMENT_TOKEN_TO_BE_REPLACED

Miami costs itself with dumb penalties in loss to Virginia

The Miami Hurricanes are going to be kicking themselves over the way their game against Virginia ended on Saturday.

Miami lost to Virginia 16-13 and struggled offensively all game. They finally got their first touchdown of the game late in the fourth quarter on an 11-yard run by Malik Rosier with 3:04 left.

The Hurricanes tried an onside kick but Virginia recovered to set themselves up in field goal range. After a few stops, Miami had forced a 4th down situation, but they were called for unnecessary roughness after a late hit on third down.

Miami forced a 4th & 1….but Odenigbo was called for a late hit and gave Virginia a 1st down. Terrible pic.twitter.com/0Hyk49Z6Ra

Instead of Virginia having a fourth down with 2:39 left and potentially kicking a field goal, that gave the Cavaliers a first down.

Virginia ran a few plays and took the clock down to 30 seconds and was set for a field goal attempt. They actually made the kick to go up 19-13 but Miami committed another penalty — running into the kicker. Virginia accepted the penalty, which took the points off the board but gave them another first down. They kneeled out the clock to end the game.

It’s one thing to play poorly and not execute in a game as Miami did. But it’s even worse to play dumb and cost yourself with stupid penalties. That was just an ugly game for Miami all around.

Miami gets unsportsmanlike conduct penalty after skirmish with FSU 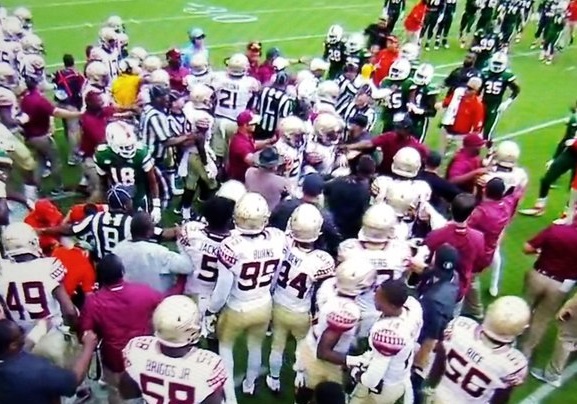 Miami got an unsportsmanlike conduct penalty after several players ran onto the field following a play that left one of their players injured in the second quarter.

Florida State was kicking off after scoring to make the game 17-7. Hurricanes kick returner Jeff Thomas was injured after being brought down on a facemask by Logan Tyler on his kickoff return, leading several Canes players to come off the bench across the field to look into the matter. Players got into it and there was a skirmish.

We got a skirmish between FSU and Miami pic.twitter.com/CDUARUgfS9

There were off-setting penalties on the kickoff. FSU got to re-kick from midfield due to the unsportsmanlike conduct penalty.

Between this and the pregame skirmish, the Miami-Florida State rivalry is alive and well.

END_OF_DOCUMENT_TOKEN_TO_BE_REPLACED That includes New York Jets defensive back Jamal Adams, who had a few things to say about the now-famous Turnover Chain during the Tigers’ 33-17 victory.

ATTENTION!!!!! The turnover chain has been reported as FRAUDULENT! It has FAKE DIAMONDS!! #LSU

IT'S ALL ABOUT #LSU pic.twitter.com/mvZ5GBBrZe

It’s a safe bet that any team that finds success against the Hurricanes will be taunting the Chain in the process. It’s something that started late last season, in fact. Much as it’s become synonymous with the Hurricanes, it’s also going to be used as a motivator to beat them.

Besides, the Turnover Chain is so 2017. We have Turnover Thrones now. Catch up.