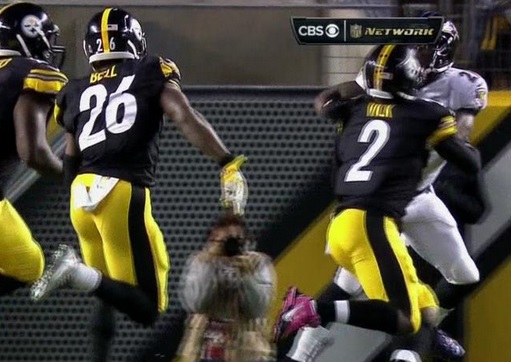 Michael Vick has emphasized the past few years that he is a team player who will do whatever it takes to help his squad succeed. That attitude was on display Thursday night when he decided to get physical on a running play.

The Steelers had a 1st and 10 at the 11 and handed off to Le’Veon Bell for a run to the left. Bell went left and saw nothing was there, so he cut it back to the right. There was a Ravens defender in his way but luckily Vick engaged Lardardius Webb and blocked him well enough to allow Bell to score.

Vick’s block may be a little thing, but it helped yield a big result, and it showed that he is unselfish and willing to make sacrifices for the good of the team. 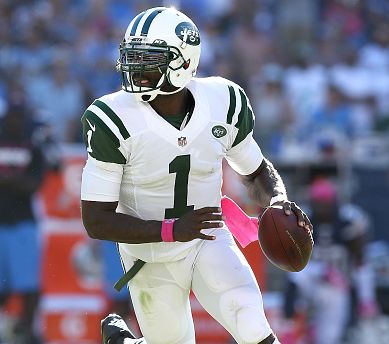 Six years after being released from prison on felony dog fighting charges, Michael Vick is still eliciting strong reactions from members of the community.

Vick’s signing by the Pittsburgh Steelers on Tuesday was met with anger from some fans. Some even came out and protested the signing with anti-Vick signs:

Vick spoke with the media after practice and said all the right things.

“You can’t take back what happened in the past. Everybody’s different when they’re 20 that when they’re 35,” he said via the Beaver County Times’ Chris Bradford. “The only thing I can do is try and influence kids from not going down the same road that I went down.”

Vick, who spent last season with the Jets, says he is excited to back up a future Hall of Famer in Ben Roethlisberger and play for the Steelers.

“So glad that I have an opportunity to be a Pittsburgh Steeler and play for a great organization. I’m going to do everything in my power to make sure that I make Mr. Rooney and Coach Tomlin proud and my teammates anytime I get a chance.”

Coach Mike Tomlin long supported Vick’s return to the league, so it’s no surprise he had interest in signing the quarterback.

As for the protesters, it might be time to forgive the man and give him a break. Vick cannot change what happened in the past; all he can do is continue to be an upstanding citizen as he has been. He has not gotten into any trouble since being released from prison; he has spoken out against animal cruelty; and he has worked hard to pay back his debts. What more do you want from him?

With Brad Gradkowski suffering a hand injury on Sunday that resulted in him needing surgery, the Steelers were in need of quarterback depth. They found help in the form of Michael Vick.

Vick has signed a one-year deal with Pittsburgh. While Vick is not the same player he was during his younger days, he still has enough to be effective and that’s what attracted the Steelers to him.

“There’s not a throw on the field he can’t make from an arm strength standpoint, he’s a very experienced guy at what he does at this point in his career. And, obviously, the mobility is still unique even at 35,” said Tomlin via the Pittsburgh Post-Gazette.

Ben Roethlisberger was among the first players to endorse the move.

“For me, it’s about any way, any person, any thing who can help this team,” Roethlisberger said. “If that’s Michael Vick, then so be it.”

Vick played in 10 games with the Jets in 2014, completing 52.9 percent of his passes with three touchdowns and two interceptions.

The Pittsburgh Steelers are searching for depth at quarterback, and Michael Vick is reportedly on their radar.

According to ESPN’s Adam Schefter, Vick was scheduled to visit with the Steelers on Tuesday. The news came shortly after it was announced that Pittsburgh backup quarterback Bruce Gradkowski suffered a dislocated finger during a preseason game on Sunday and will require surgery.

Someone from Vick’s camp (take that for what it’s worth) told TMZ that Vick has received offers from multiple teams and is hopeful he will sign with the Steelers.

Vick, who turned 35 in June, was not very effective playing limited snaps with the New York Jets last season. He completed just 52.9 percent of his passes and threw three touchdown passes and two interceptions. He also lost three fumbles and exposed himself to a number of big hits.

Aside from the advice he gave to LeSean McCoy, we haven’t heard much from Vick this offseason. However, we wouldn’t be surprised if a team brought him in as a veteran presence with plenty of starting experience.

Michael Vick to LeSean McCoy: ‘Don’t expose yourself so much’ Michael Vick and LeSean McCoy were teammates for five seasons with the Philadelphia Eagles. They know each other well, but that doesn’t mean they agree on everything.

Such is the case when it comes to McCoy’s opinion of Chip Kelly.

While speaking to reporters at Ron Jaworski’s Celebrity Golf Challenge on Monday, Vick said he gave McCoy some advice recently in the wake of the running back accusing Kelly of being racist.

“I try to give my little piece of advice that I can offer him. He’s his own man. He has his own feelings and emotions. So I can’t interfere with that,” Vick said, per Jordan Raanan of NJ.com. “The only thing I try to tell him is stay positive, don’t expose yourself so much. You’re still blessed to be playing in the NFL, a great league, and don’t take things so personal. Your life is great on and off the field. Keep it that way.”

Vick said that he keeps in touch with McCoy and Riley Cooper, who has had plenty of his own problems when it comes to race-related issues. Vick added that he does not think Kelly favors white players.

If you want to know why Kelly traded McCoy, look no further than the comments he made during a speaking appearance back in 2008. It seems obvious that Kelly feels DeMarco Murray will be a better fit for his system. Unless he has an actual reason to accuse Kelly of being racist, McCoy was wrong to say what he said.

Mike Vick, Chris Johnson likely to be released by Jets

The New York Jets are likely to release Mike Vick and Chris Johnson in the coming days, with no plans to bring back at least one of them.

According to Metro New York, “every indication right now is that the Jets are going to move on” from Johnson, who disappointed in his only season with the Jets.

Johnson, who will be 30 in September, rushed for 663 yards and one touchdown in a limited role, though he did average 4.3 yards per carry. The team can save $3.5 million against the cap by cutting him prior to Feb. 16, which is when his $500,000 option bonus is due.

Metro says Johnson will be released because of both his limited production and his January arrest.

The Jets also plan to let Vick test free agency for now, but they are not ruling out bringing him back on another one-year deal. Metro says there is no talk between the sides right now on a contract offer, but there might be interest in him down the road.

Vick turns 35 in June and struggled in his times filling in for Geno Smith. Vick threw for five touchdowns but turned the ball over four times. He only completed 52.9 percent of his passes and no longer appears capable of winning NFL games. We’re still rooting for Vick and hoping he gets another contract to help pay off his remaining debt.

Michael Vick has almost paid off his massive debt

New York Jets quarterback has almost crawled his way completely out of financial trouble — something that seemed nearly impossible when he filed for bankruptcy in 2008.

According to ESPN’s Darren Rovell, Vick is “weeks away” from getting out from under what was once an $18 million debt. At one point, Vick owed $6.5 million to the Falcons for bonus money he had to give back, $5 million to his former agent and several million in real estate loans. He earned more than $45 million from 2010 through 2014 and agreed to a restrictive budget during that span.

Joseph Luzinski, Vick’s liquidating trustee, said the Jets quarterback has paid off more than $15 million (84.7 percent) of the $17.8 million he owed. And Vick wasn’t necessarily obligated to pay it all back.

“What Michael did was the exception, not the rule,” Luzinski said. “He didn’t have to do this. The law allows you to skate by and pay your creditors 10 or 20 cents on the dollar, but he thought this was the right thing to do.”

“I didn’t want to stiff people who never stiffed me,” Vick explained. “I feel blessed because I came out and found myself in a position where I had a lot of people that really believed in me, people who gave me an opportunity. At the time, it wasn’t about trying to fulfill all the bankruptcy needs. I was trying to fulfill all the needs that I had in my life because I had nothing.”

More than 50 percent of Vick’s income has gone to taxes and legal fees in recent years. And even when his debt is paid off by the new year, Vick says he’s not going to stop appreciating the value of a dollar.

Two years ago, a report made it seem like Vick was spending money like a fool despite getting a second lease on life. That wasn’t the case. In reality, he was paying back money that he owed. It sounds like he has done a respectable job of that.