Mike Krzyzewski to return on Saturday Mike Krzyzewski will make his return to the sideline for Duke’s game against Pittsburgh.

Krzyzewski has been away from the team on a leave of absence due to back surgery to remove a fragment of a herniated disc. He last coached on January 4. His expected timetable for recovery was approximately four weeks. On Thursday, Duke announced Krzyzewski would be back for this Saturday’s home game.

During Coach K’s absence, former Blue Devil player and associate head coach Jeff Capel stepped in as interim head coach. The Blue Devil’s went 4-3 without Krzyzewski, including back-to-back losses to Florida State and Louisville. Since then, they’ve won three of their past four games and are 17-5 overall.

Eventhough Krzyzewski was not occupying his customary place on the sideline during Duke games, he was still very much in the news. Krzyzewski reinstated Grayson Allen from his indefinite suspension as a result tripping Elon’s Steven Santa Ana after just one game. It was a decision that even surprised Dick Vitale. You can read his comments here. Krzyzewski would later defend his decision. The Duke Blue Devils played their first game while Mike Krzyzewski is sidelined after back surgery, but the coaching staff made sure to remember him.

Maybe it’s overkill, but Coach K obviously demands a huge amount of respect around Durham, including from the coaching staff. He is fine, mind you. His surgery was a success and he’ll probably be out a few weeks, but the expectation is he’ll be back in his vacant seat before the season is over. 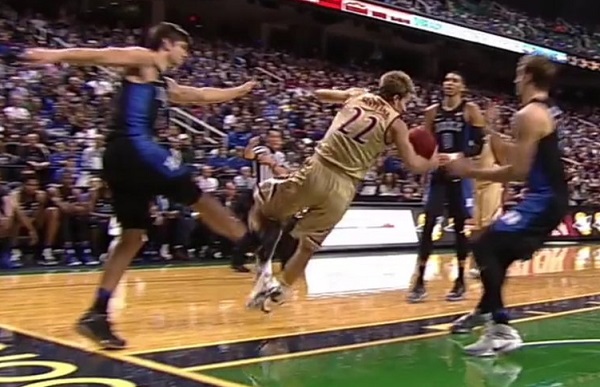 Duke coach Mike Krzyzewski was forced to defend himself Wednesday after Grayson Allen’s “indefinite” suspension was revealed to last just one game.

Krzyzewski and Duke were criticized for what was perceived as a modest punishment for Allen’s latest tripping incident, but Krzyzewski said that people wouldn’t know the other things that Allen did privately.

“What he did was wrong. He was punished for it. I think it’s time to move on, and I think the new role he has will be a good one for him.”

Krzyzewski added that part of the reason Allen returned was that it was the only opportunity to get him and Harry Giles in the lineup together before he took leave for back surgery. It adds credence to the theory that Allen’s suspension was limited to avoid forcing interim coach Jeff Capel to make a big decision on Allen’s punishment while Coach K is away.

Ultimately, it seems like basketball reasons played a big role in Allen’s punishment ending as opposed to any real sense of justice being done. That’s pretty clear when even this guy is questioning things.

Mike Krzyzewski taking leave of absence to undergo back surgery

Duke coach Mike Krzyzewski will take an indefinite leave of absence due to back problems.

The team announced in a statement issued Monday that Krzyzewski needs surgery to remove a fragment of a herniated disc. The timetable for recovery is roughly four weeks. Assistant coach Jeff Capel will coach the team in Krzyzewski’s absence, starting with Saturday’s game against Boston College.

“Dr. William Richardson, Dr. Friedman, and our medical team have worked tirelessly to help manage this issue for several weeks,” Krzyzewski said in the statement. “Together, we have determined that surgery is the best course of action at this time. During my recovery process, the team will be in the capable hands of Coach Capel, Coach James and Coach Scheyer. As soon as the doctors clear me to do so, I look forward to returning and giving our team 100% of my energy and attention, which is certainly something that they deserve.”

A source had told ESPN’s Jeff Goodman that Krzyzewski would be taking the leave of absence.

“His back has been bothering him way worse than he’s let on,” the source said. “The plan is for him to be back at some point this year.”

Krzyzewski isn’t the first prominent basketball coach to step away to address back problems. Hopefully his surgery goes smoothly and is free of complications.

Coach K called out player for showboating in 2007 also Duke head coach Mike Krzyzewski made headlines after his team’s loss to Oregon on Saturday when he lectured Ducks star Dillon Brooks about showboating. Coach K told Brooks he was “too good of a player” to being showing off by throwing up a 3-pointer in a game that Oregon had under wraps.

Apparently, this is not the first time Krzyzewski has taken the liberty of scolding an opponent after a Blue Devils loss.

In 2007, Coach K had a similar chat with former Virginia Tech guard Zabian Dowdell following the Hokies’ overtime win over then-No. 5 Duke. Dowdell, who scored 20 points and had five steals, bumped chests with a teammate and flashed his jersey to taunt the Cameron Crazies.

“He just told me I’m too classy of a guy to be carrying on like that,” Dowdell said at the time.

When Coach K was asked about his conversation with Dowdell, he repeatedly interrupted a reporter and said he was simply congratulating Dowdell on being “fabulous” in the game. If that sounds familiar, it’s probably because Krzyzewski said almost the same exact thing when asked about his exchange with Brooks.

After a video clearly showed that he lectured Brooks (watch it here), Coach K apologized and said it is not his place to speak to another team’s player.

If you ask me, Coach K simply let his frustration get the best of him on both occasions. He knows some of the things the Cameron Crazies have been accused of saying, and he loves the home-court advantage that they give the Blue Devils. There’s nothing wrong with players giving it back.

Poring over match-ups in the first round of the NCAA Tournament can be a painstaking chore, particularly when faced with a deluge of facts, stats and figures that fail to paint a complete picture. Roster turnover alone makes it incredibly difficult to put faith in a particular team based upon previous results.

Of the teams that comprised last year’s Final Four in Indianapolis, only six of the twenty starters returned this season. Suffice it to say, the only variable that remains unchanged for most tournament teams is their head coach. With that fact in mind, we decided to take a look at the coaches you can bank on in the first round of the tourney and some high-profile coaches to be wary of.

COACHES TO BANK ON EARLY

One of the strongest branches of Dean Smith’s coaching tree, Williams has accomplished an incredible amount, splitting his coaching career between the plains of Kansas and Tobacco Road. Williams has led his teams to seven Final Fours and two national championships while also avoiding a single first-round exit in the Big Dance. Simply put, he’s the gold standard of the first round. In addition to his immaculate record, only eight of his 25 first round victories were decided by fewer than ten points. Since arriving in the Blue Grass state, Coach Cal has posted an absurd 22-4 record in the NCAA Tournament as Kentucky’s head coach. Putting aside the fact that his Kentucky teams have advanced to at least the Elite Eight every year, Big Blue Nation has also pulverized its first round competition. As Kentucky’s head coach, Calipari’s average margin of victory is 15.2 points. The former UMass and Memphis head coach hasn’t lost a first-round contest since 2003.

8 appearances, 7-1 in the first round

In Miller’s first NCAA Tournament game as a head coach, his Xavier squad lost by just four points to Gonzaga as a 14-seed. Since then, Miller’s record during March Madness is a sterling 17-7 with six Sweet 16 appearances and zero first-round exits. The former Pitt Panther point guard has specialized in squeezing out close games. Five of his 17 NCAA Tournament wins have come by eight-or-fewer points. Miller grew up in Ellwood City, Pa., just 40 minutes from John Calipari’s hometown, so there must be something in the water in Western PA.

9 Appearances, 7-2 in the first round

Beilein lost his NCAA Tournament debut, a first-round blemish that came 20 years ago when he was Canisius’ head coach. His next stop was at Richmond, which saw him orchestrate one of the greatest first round upsets of all-time, a 62-61 victory over South Carolina as a 14-seed. Beilein’s second stepping stone job led him to West Virginia in 2002. After a two-year run fueled by Kevin Pittsnogle, which saw Beilein score five wins in the Big Dance, Beilein was on the move again, this time to Michigan. In 2012, Michigan was nipped by Ohio in the first round. Since that first round defeat to the Bobcats, Beilein is 8-2 in the NCAAs. Michigan has also asserted its dominance in the first round, having waxed its last two first round opponents by 15 and 27 points respectively.