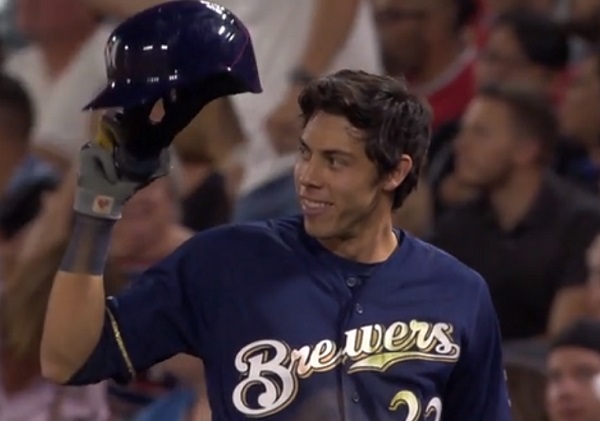 Mike Trout comes up limping after sliding into second

Mike Trout was limping after sliding into second base following a double in the Los Angeles Angels’ game against the Oakland A’s on Thursday.

Trout batted with a runner on first and two outs in the top of the eighth. He smoked a line drive to center and decided to stretch for a double. He slid into the base and beat the tag, but he paid the price. Trout came up walking gingerly — possibly because he had aggravated a previously irritated area.

A trainer came out to look at Trout, but he remained in the game.

Trout went 1-for-3 with a walk. The Angels were shutout 4-0 and only had three hits in the game. Once again it looks like an offense of Trout and everyone else for the Angels.

Mike Trout chose to forego free agency once again by signing a long-term extension with the Los Angels Angels two years before his previous deal expired, and the star outfielder says what happened with Bryce Harper and Manny Machado was part of the reason he wanted to go that route.

Trout spoke with reporters on Sunday about his record $430 million contract, and he said he informed the Angels he either wanted to sign a new deal now or was going to test free agency following the 2020 season. However, he preferred to lock in an extension and viewed the “tough couple months” for Harper and Machado as a “red flag.”

Mike Trout: "If we hadn’t gotten a deal done it would have been tough for me. I obviously wanted to be here. I said I want to deal with it now. If not i’m gong to explore free agency. I didn’t want to go through the next few seasons thinking ‘Am I going to get a deal or not?’"

Mike Trout: "I kind of saw what Bryce and Manny went through and it drew a red flag for me. I talked to Manny and Bryce. It was a tough couple months in the offseason. They put it perspective in my mind. I obviously want to be an Angel for life. That was a big key."

Trout added that he would not have felt right moving to another team in two years to chase a championship. Some have wondered why he committed to the Angels despite reaching the playoffs just once in his eight seasons, but Trout said “teams go through ups and downs” and he prefers to ride that out.

No one is going to weep for Machado and Harper after they got $300 million and $330 million, respectively, and even Harper said he is pleased with the way things unfolded. Given what Trout has said about his commitment to the Angels, it’s clear his contract situation could not have worked out more perfectly.

Mike Trout says staying with Angels was ‘never a question’

There were a lot of rumors about Mike Trout heading home to his native Philadelphia when his contract expired, but that was, apparently, always overblown.

At a rally confirming Trout’s 12-year, $430 million deal with the Los Angeles Angels, the outfielder said southern California was “home” now, and there was “never a question” that he’d stay long-term.

Mike Trout: “This is my home…there was never a question I was going to be an Angel for life.”

There was a chorus of boos when Mike Trout brought up the possibility of going to play on the East Coast.”

The deal came after days of Bryce Harper very publicly recruiting Trout to Philadelphia. It may be that Trout is saying things to appease his home fans, but it really doesn’t sound like he ever got close to wanting to push his way to free agency in order to return home.