Golden State Warriors forward Andre Iguodala is reportedly closing in on a return having not played since Game 3 of the Western Conference Finals.

According to Chris Haynes of ESPN, Iguodala did a full workout and sprinted on Saturday, and while he didn’t play in Game 2, he is pain-free and anticipates returning before the series is over.

Iguodala being pain-free is a pretty big deal, as it was one of the major tests he would have to pass in order to return. His coach anticipates that he’ll play before the series ends, and it sounds as though Wednesday’s Game 3 is actually a realistic target for a possible return to action.

Kendrick Perkins was not even wearing a uniform during Game 2 of the NBA Finals on Sunday, but that did not stop the veteran big man from angering his opponents and getting into a confrontation.

At the end of the third quarter of Golden State’s win over the Cavaliers, Stephen Curry tripped over Perkins’ legs on a 3-point attempt as time expired. Curry felt that Perkins either stuck his feet out or made no effort to move, and he immediately confronted him. ESPN’s Chris Haynes reports that several of Curry’s teammates were also bothered by the “dangerous play” and felt Curry could have suffered a serious knee or ankle injury because of Perkins’ “reluctance to move his knees and feet.”

Steph Curry gets in Kendrick Perkins' face after Steph trips on Perk's legs on final shot of third quarter pic.twitter.com/ScS8FBFVRZ

Curry chose not to explain why he was so angry.

Perkins was signed by the Cavs late in the season and has not played a significant role on the court, but he’s managed to become part of the story on multiple occasions. Between the tripping in Game 2, his incident with Draymond Green in Game 1 and the beef he had with Drake, Perkins has attracted plenty of attention.

LeBron James after Game 2 defeat: ‘It sucks to lose’

LeBron James put things pretty simply after a Game 2 loss to the Golden State Warriors in the NBA Finals on Sunday night.

LeBron’s Cleveland Cavaliers fell to the Warriors 122-103 to drop down 2-0 in the series. James was asked after the game whether he can enjoy the competition at all despite losing.

“Absolutely not. It sucks to lose,” James said. “It sucks when you go out there and give it everything that you have and you prep, and your mind is in it, your body is in it, and you come out on the losing end. But nothing would ever take the love of the game away from me. I think the competition is something I live for. It sucks to lose, that’s for sure. But it definitely won’t stop me from preparing to be better the next day.”

The whole question was pretty silly. Did someone expect James to say he appreciates the tough battles with the Warriors while his team is losing? Not a chance. The guy is a competitor and is going to battle undermanned. There’s nothing satisfying or pleasing about that.

Stephen Curry was all that anyone could talk about during Game 2 of the NBA Finals on Sunday, much to the annoyance of Tristan Thompson.

After Curry dropped 33 points on an NBA Finals-record nine triples in Golden State’s 122-103 win over Cleveland, Thompson was asked by a reporter in the locker room if the Cavaliers felt “helpless” trying to guard the two-time MVP. Thompson dropped a number of expletives in response and proceeded to cut his interview short. He also gave a vulgar reply to another question about the officiating, per ESPN’s Brian Windhorst.

Tristan Thompson was asked if the Cavs feel helpless at times trying to guard Steph Curry. He dropped a string of curse words in disagreement and ended his interview.

Also said: "I'm over this ref sh*t" when asked about officiating

It was obviously a frustrating evening for Thompson, who finished with just five rebounds (albeit 11 points) and regularly found himself stuck on an island defending Curry in Cleveland’s switch-heavy scheme.

Curry’s night was certainly historic and led to some great Twitter reactions. But it is never fun to be on the other side of such a performance, as Thompson and the Cavs can attest to. 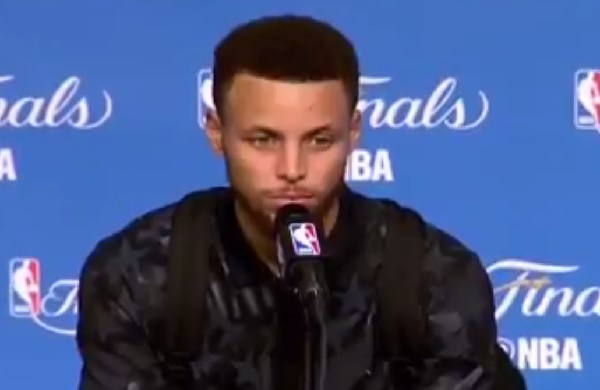 Stephen Curry was in a good enough mood after Game 2 of the NBA Finals to deliver a funny line about his history of ankle injuries.

During Game 1, Klay Thompson suffered an ankle sprain after a collision with JR Smith. He reportedly received around-the-clock treatment prior to Game 2.

Thompson did play in Game 2 and scored 20 points in 34 minutes on the floor. After the game, Thompson was responding to a question about his ankle when Curry interjected with a line that prompted laughter.

Klay: "I didn't realize how much you used your ankle until I hurt it."

Curry has had his share of ankle injuries during his career. If there’s one person who knows what it’s like dealing with one and recovering from one, it would be him. Thompson certainly has a good resource at his disposal.

LeBron James obviously seems to need more help against the mighty Golden State Warriors, and one noble benefactor is answering the call.

Following the Cleveland Cavaliers’ blowout 122-103 loss to the Dubs in Game 2 of the NBA Finals on Sunday, beloved basketball-playing dog Air Bud (or at least the people running his official account) tweeted an offer to aid the Cavs.

The tweet quickly went viral, picking up thousands of likes and retweets in less than an hour. As for Air Bud himself, he has obviously been playing basketball for a while now (the original film came out in 1997) and could really help Cleveland come back to pull off the pupset in what has been a rather ruff series for them so far.

Bad dog puns aside, James might not be opposed to the idea — somewhat remarkably, he semi-referenced needing Air Bud’s help earlier in the season.

JR Smith responded to being trolled by Golden State Warriors fans in Game 2 of the NBA Finals on Sunday night.

The Cleveland Cavaliers guard was jeered by Warriors fans in every possible way due to his bonehead play at the end of Game 1. Fans brought signs to Oracle Arenas that made fun of him; the fans cheered him during intros; and they sarcastically chanted “MVP” for him too.

Smith said after the Cavs’ Game 2 loss that he liked the fans acknowledging him.

JR Smith on getting MVP chants: “I liked it. I’d rather them do that than not acknowledge me” pic.twitter.com/yjiuv6GBHI

Smith saying that is one way to try and take away the fun from Warriors fans. If he said it bothered him, they might be more likely to do it again.

But if Smith thinks that this is his version of Reggie Jackson’s “they don’t boo nobodies”, then he’s wrong. Smith got attention not because he’s doing well against his opponent, but because he’s so bad he’s helping them.

Steve Kerr poked a little fun at LeBron James at the end of his press conference following Game 2 of the NBA Finals on Sunday night.

The Golden State Warriors head coach answered questions from the media after his team’s 122-103 victory over the Cleveland Cavaliers. Upon completing his duties for the media, Kerr said to the reporters “I thought you guys were much better tonight.”

Steve Kerr ends his press conference with an allude to LeBron's close the other night: "I thought you guys (reporters) were much better tonight."

What does that have to do with LeBron? Well, after his rocky news conference following Game 1, James told the media “be better tomorrow.”

LeBron James walked out of the postgame after questions about JR Smith. “Be better tomorrow.” pic.twitter.com/2Cb7nGJT8h

It was easy for Kerr to be in a good mood after his team cruised to victory. This also isn’t the first time this postseason we’ve seen him do a bit of trolling either. Steph Curry was on fire in Game 2 of the NBA Finals on Sunday night, and there really is nothing you can do when that happens.

Curry made an NBA Finals record nine 3-pointers in Game 2, going 9-for-17 on threes as part of a 33-point game. 16 of his points came in the fourth quarter, including this ridiculous shot.

This ain't even human pic.twitter.com/OObDLr6Yiy

The Golden State Warriors star added seven rebounds and eight assists for good measure. Twitter had all sorts of plaudits for Curry.

END_OF_DOCUMENT_TOKEN_TO_BE_REPLACED

Watch: Steph Curry gets into it with Kendrick Perkins

Steph Curry got into it with Kendrick Perkins at the end of the third quarter of Game 2 of the NBA Finals on Sunday night in Oakland.

Curry attempted a shot in front of the Cleveland Cavaliers’ bench just before the quarter ended. He missed and then tripped over Kendrick Perkins, whose legs were extended. The two got face-to-face after that:

Steph Curry gets in Kendrick Perkins' face after Steph trips on Perk's legs on final shot of third quarter pic.twitter.com/ScS8FBFVRZ

Perkins was signed by the Cavs late in the season and has only played 15 minutes — in one game in April. He’s even just wearing a suit on the bench rather than a uniform. But between this and his incident with Draymond Green in Game 1, he’s managed to capture plenty of attention. That’s not even counting his beef with Drake too.