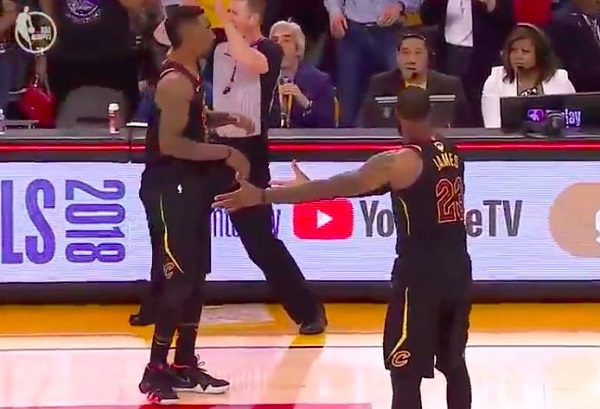 The Cleveland Cavaliers had as good of an opportunity as they could have asked for to steal a game from the Golden State Warriors to begin the NBA Finals, but JR Smith had other plans. Kevin Durant believes it was at that moment that his team won another title.

Durant was a guest on “Jimmy Kimmel Live” this week, and he was asked point blank if he knew the series was over after Smith’s unprecedented mistake. He hesitated for a moment before admitting, “Yeah, I did.”

“We had a good feeling,” Durant said. “We knew we had to play well, but we knew we kind of broke them a little bit with that one.”

Kimmel also asked Durant if he felt any sympathy for Smith after Smith made such a boneheaded play.

“I’m happy that he made that decision to do that, especially with the game on the line,” Durant said with a smile. “We needed that win for the sweep.”

Smith’s lack of awareness in a tie game could not have been more costly for the Cavs. In addition to costing them a potential win in Game 1, it also indirectly led to LeBron James’ hand injury. Fans had a strong feeling the series was over after that happened, so it’s no surprise the Warriors felt the same way.

The Golden State Warriors’ sweep of the Cleveland Cavaliers in this year’s NBA Finals not only cemented them as one of the greatest teams in sports history — it also made good on a bold prediction by head coach Steve Kerr.

After the Warriors completed the four-game rout of the Cavs on Friday to clinch their third NBA title in the last four seasons, Kerr revealed that he told his staff and his players when they were down 3-2 to the Houston Rockets in the Western Conference Finals that they were going to win six straight games.

“You thought I was crazy but I told you, I felt good after Game 5 in the Houston series,” Kerr was quoted as saying after winning the championship, per Ethan Strauss of The Athletic. “I just saw something and I thought, yeah we got this. Now there’s a lot of chance that can happen. Somebody sprains an ankle, or the ball bounces the wrong way, whatever, but I felt like as long as nothing happened injury-wise, we were going to win that series.”

While making such an assertion in private is obviously very different from making it in public, Kerr’s alleged prediction was still remarkable nonetheless. For one, the Warriors were not only down in the conference final series to a formidable Houston team, but they also did not yet know the status of Rockets guard Chris Paul for Games 6 and 7 either. Furthermore, they also did not know who would advance in the Eastern Conference between the young, well-coached Boston Celtics or the cyborg known as LeBron James and his Cavs.

In the end, it all fell into place for the Warriors just as Kerr foretold, and given what he told reporters at the time, it’s easy to believe he made that prediction. There is an argument to be made that leading this Cleveland Cavaliers team to the NBA Finals stands as one of LeBron James’s more impressive career achievements, and there’s one stat that may back that up further.

After being swept Friday night by the Golden State Warriors, the Cavaliers finished the playoffs with a negative point differential, having been outscored on the whole 2,263-2,225 — the first NBA Finalist since the 2002 New Jersey Nets to allow more points than they scored.

This year's Cavaliers were the first Finals loser since the 2002 Nets to get outscored in the playoffs.

Remarkably, the Cavaliers were only barely above water even before they played Golden State. They outscored opponents by just 21 points through the first three rounds of the playoffs, 1,821 to 1,799, with only their sweep of the Toronto Raptors keeping them above water. The Indiana Pacers outscored them 704-664 in the first round, and they only outscored the Boston Celtics by six points total in the Eastern Conference Finals. Much of that is due to the fact that, in losses, the Cavs fell victim to blowouts, while their wins tended to be tighter and less convincing. To be blunt, given how they played at times in the Eastern Conference quarterfinals and finals, it is remarkable that they got as far as they did.

What does this tell us? The Cavaliers were never great defensively and when they lost, they tended to lose badly. The Finals were every bit the mismatch that they seemed to be. Things like this — particularly how the team performed in Friday night’s elimination game — will probably explain why James chooses to depart in search of a team with a better shot at dethroning Golden State, if he does, in fact, leave Cleveland.

The NBA Finals proved to be a mismatch between the Golden State Warriors and Cleveland Cavaliers, which is something most fans recognized entering the series. After his Warriors swept the Cavs in the NBA Finals, head coach Steve Kerr acknowledged that he had the more talented team. In fact, Kerr said he was surprised the Cavs had even reached the Finals.

Steve Kerr praises Ty Lue, LeBron, for how they powered this Cavs team: "The fact that they got here surprised me, frankly. Watching them, it didn't seem like they would have enough."
Adds: "We had more talent than they did, and talent wins in this league."

He’s right. The Cavaliers were on the ropes against the Indiana Pacers and Boston Celtics. It took some outstanding performances by LeBron James for them to even make the Finals. And once they got there, the difference in the teams was stark.

Credit to Kerr for recognizing and acknowledging that, though he’s probably not about to apologize for it — nor should he.

LeBron James injured his hand punching board after Game 1 LeBron James’ frustration got the best of him after Game 1, resulting in an injury to his right hand.

The Cleveland Cavaliers lost to the Golden State Warriors in heartbreaking fashion in Game 1. Afterward, James indicated it was one of the toughest losses of his career. James was so frustrated after the loss that he punched a board. The result was reportedly a bone contusion in his right hand.

The information was first reported by USA Today’s Sam Amick after Game 4.

LeBron James has been playing with a serious bone contusion in his right hand since Game 2, I’m told.

The injury was the product of frustration: He punched a white board after Game 1, I’m told. https://t.co/LQ03YbG7Fg

After the series finally ended on Friday night, James appeared before the media with a cast on his hand. He publicly acknowledged the injury, saying he “pretty much played with a broken hand.”

LeBron James on his right hand injury: "Self-inflicted. Post-game, after Game 1. Very emotional… the way we played, the calls that were made, I had emotions that the game was taken away from us.. Pretty much played the last three games with a broken hand."

LeBron reportedly had two MRIs on his hand after suffering the injury, which revealed a bone contusion. James said he kept quiet about it so the Warriors wouldn’t find out about it.

LeBron James suffered a significant right hand injury after Game 1 when he punched a black board in the locker room, sources told me & @mcten. He had 2 MRIs & has been wearing a soft cast. LeBron not using injury as an excuse but kept quiet to prevent Warriors from knowing.

The Warriors were clearly the better team in the series. However, the Cavaliers had a real chance to steal Game 1. Unfortunately for them that did not happen and LeBron James has an injured hand to show for it. The Cleveland Cavaliers’ sweep at the hands of the Golden State Warriors was apparently just as crushing on the inside as it looked from the outside.

After their season-ending 108-85 loss at home in Game 4 of the NBA Finals on Friday, multiple reporters relayed that the Cavs’ locker room was totally silent with players just staring into space and LeBron James slumped at his locker.

Pretty devastating scene in the Cavs locker room. LeBron, ice on his knees, feet in an ice bucket, right hand wrapped in ice and a towel over his head is slumped back in his chair. Everyone else quiet with 1000 yard stares.

Could hear a pin drop in the Cavs locker room right now.

Don't expect to hear anything from @KingJames for a while tonight. I am in #Cavs locker room, and he is still sitting at his locker with a towel draped over his face. (No photos allowed, per NBA media rules.)

This was Cleveland’s fourth straight appearance in the NBA Finals but easily their worst showing yet — they lost the four games against Golden State by a combined 60 points and dropped the final two games at home as the Warriors wound up celebrating on their floor. Yes, they were heavily outmatched from a talent standpoint from the very start of the series. But the Cavs never seemed to recover from their spectacular collapse in a winnable Game 1 at Oracle Arena, and that had to make getting swept that much tougher to swallow.

Now the team enters into an uncertain future with LeBron James set to become a free agent (and many teams already looking to vulture him away), and you get the feeling that the Cavs may see this as the end of an era. LeBron James is expected to become a free agent once again and potentially leave the Cleveland Cavaliers, and players around the league are excited for that possibility. They’re so excited in fact, that less than 30 minutes after James’ Cavs were swept in the NBA Finals by the Golden State Warriors, several players were already recruiting him.

It started with Joel Embiid encouraging LeBron to join him in Philly:

Then San Antonio Spurs guard Dejounte Murray got in on it:

And Enes Kanter tried to recruit James to the Knicks:

Kanter trying to get LeBron to New York is especially interesting considering he hasn’t even committed to them yet, though that’s a good sign.

Expect the LeBron free agency talk to be much more exciting than the NBA Finals were.