Saints have made big decision about Taysom Hill Taysom Hill has signed multiple big contracts with the New Orleans Saints, and at one point it looked like he was the heir apparent to the Drew Brees throne. That is not the plan under new head coach Dennis Allen.

Jameis Winston is expected to start for the Saints next season after they recently re-signed him on a two-year deal. Allen told reporters this week that Hill is still going to get plenty of playing time, but it will be primarily as a tight end.

“I think the role for Taysom really is going to be a lot more of the kind of F tight end, move tight end type of role,” Allen said, via ESPN’s Mike Triplett. “I think that’s the direction that we need to move with him, because I think he can be one of the better players in the league in that role. So if Jameis is out there playing quarterback, I don’t really like having Taysom next to me on the sideline. And so I think you’ll see him more in that type of role.”

Hill has started games in the past when Winston and Brees were hurt. But the Saints signed Andy Dalton to a one-year deal on Tuesday, so it does not seem like they view Hill as the primary backup behind Winston.

The Saints signed Hill to what initially looked like a shockingly rich contract extension last year. The deal is structured in a very unique way, however. Hill will still make plenty of money, but he would earn far more if he were the primary quarterback in New Orleans. It does not sound like that will be his role. The New Orleans Saints recently brought back Jameis Winston to be their starting quarterback next season, and they have now added a trusted veteran backup to the fold.

Andy Dalton and the Saints have agreed to a one-year, $6 million deal, according to ESPN’s Adam Schefter.

Dalton spent last season with the Chicago Bears. The team infamously named him their starting quarterback after signing him and then went on to draft Justin Fields in the first round. Dalton still entered the year as the starter, but he suffered a knee injury in Week 2. Fields then took over, and Dalton got the job back after the rookie dealt with some injuries several weeks later.

The 34-year-old Dalton finished with 1,515 yards, eight touchdowns and nine interceptions last season. There was no market for him as a starter heading into 2022, but he makes sense for the Saints as a backup. Jameis Winston is recovering from a torn ACL, so Dalton gives the team an experienced insurance option.

The New Orleans Saints are one of a few teams that aggressively pursued Deshaun Watson only to miss out on the star quarterback, so they are bringing back a familiar face instead.

Jameis Winson has agreed to a two-year contract with the Saints. Tom Pelissero and Ian Rapoport of NFL Media report that the deal is worth $28 million with $21 million guaranteed, which is clear starter money.

Winston spent the last two seasons with the Saints. He tore his ACL in late-October, but he has said he hopes to be ready for the start of the 2022 season. The 28-year-old posted solid numbers before he got hurt, throwing for 1,170 yards, 14 touchdowns and three interceptions in seven games.

New Saints head coach Dennis Allen was an assistant on Sean Payton’s staff for several seasons before being promoted, so there is familiarity between him and Winston. The Saints must like what they saw from Winston before the year-ending knee injury.

The New Orleans Saints are hunting for a quarterback, but Taysom Hill does not appear to be in consideration for the job at all.

Though Hill has long been hyped as a sort of hybrid player, the idea of him as a quarterback is reportedly off the table. The Athletic’s Larry Holder said on FiriusXM’s “Fantasy Dirt” that the experiment of Hill at quarterback is “over,” and he is not even being considered for the job.

"The Taysom Hill experiment at quarterback is over in New Orleans. He won't be part of that conversation," @LarryHolder on Fantasy Dirt @SiriusXMFantasy.

This hardly comes as a surprise, as the Saints have been reluctant to put much faith in him during meaningful games. Hill also suffered a significant foot injury in January, so there are questions about his health as well.

The Saints tried and failed to trade for Deshaun Watson, but that failure left them back at square one. Instead of looking to Hill, they clearly prefer another option instead. 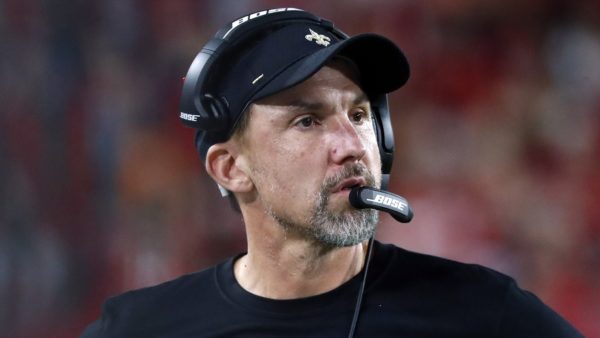 The New Orleans Saints are moving on quickly after missing out on Deshaun Watson.

The Saints are expected to revisit their interest in Jameis Winston after Watson turned down a trade to New Orleans, according to ESPN’s Adam Schefter. Winston played for the Saints for the last two seasons and appears to have been the team’s fallback plan all along.

After today’s trade, free-agent QB Jameis Winston now is expected to be back in play for the New Orleans Saints, per sources.

The Saints aimed high with Watson, but fell short. Turning to their fallback option makes sense. Winston knows the system, and the Saints appear to view him as a safe, comfortable option if all else fails.

Winston tore his ACL on Oct. 31, but appears to be making good progress and hopes to be ready for the regular season. The 28-year-old passed for 1,170 yards, 14 touchdowns and three interceptions last season before the injury.

A Deshaun Watson trade could be completed in the very near future, as the star quarterback is said to have narrowed his decision down to two teams.

Watson met with the New Orleans Saints a second time on Wednesday night, according to a report from Nick Underhill. Aaron Wilson of Pro Football Network notes that Saints general Mickey Loomis has been described as “determined” to land Watson. The three-time Pro Bowler is expected to choose either the Saints or Atlanta Falcons.

Saints are working hard to convince Deshaun Watson to waive his no-trade clause for them, per league sources. Decision is expected to ultimately come down to Saints vs. Falcons. Saints have been characterized as a leader for Watson. Maintained dialogue since first meeting

The Falcons entered the Watson sweepstakes later than some other teams, but the interest is clearly mutual. Watson grew up in Georgia and worked for the Falcons as a ball boy. He is said to have reached out to the team personally, though most believe the Saints are the favorite to trade for Watson.

Watson has a no-trade clause, so he essentially gets to choose where he ends up. There’s always a chance a surprise team could jump in late, and we know one other NFC team has been extremely aggressive in pursuing him. Wide receiver Jarvis Landry is not having a hard time attracting interest after his release from the Cleveland Browns, according to a report.

The Kansas City Chiefs and New Orleans Saints have shown the most interest in Landry, according to ESPN’s Adam Schefter.

The two teams that have expressed the most interest in former Browns' WR Jarvis Landry are the Kansas City Chiefs and New Orleans Saints, per source.

The Chiefs and Saints both view themselves as contenders, so Landry is definitely being looked at as a secondary piece on a championship team. If Landry were to sign with either team, it is easy to see him operating as the secondary receiver to the Saints’ Michael Thomas or Kansas City’s Tyreek Hill.

The Saints look very active early in the offseason, as they’re in on another big target as well. The outcome of that pursuit may influence Landry’s eventual decision.

Report: Deshaun Watson has turned down all but 2 teams

Deshaun Watson has significant power over his trade destination, and a new report suggests he has used it to narrow his list of suitors to two.

In an appearance on WFNZ in Charlotte, John McClain of the Houston Chronicle said Watson has “rejected” all but the New Orleans Saints and Carolina Panthers, suggesting that one of those two teams is likely to be his ultimate destination. Watson has a full no-trade clause, so he can block a trade to any team if he wishes.

“He’s rejected everybody but Carolina and New Orleans.”

– @McClain_on_NFL to me just now on @wfnz re: Deshaun Watson’s next destination.

Interestingly, if true, this means Watson has rejected the Seattle Seahawks, who were rumored to be a leading contender to trade for the Houston Texans quarterback. It is unclear if Watson could open himself up to other teams again if his meetings with New Orleans and Carolina go poorly.

This does echo an earlier report suggesting that the Panthers and Saints were the leading contenders for Watson. If everyone else is out, that certainly changes the landscape.

The Deshaun Watson sweepstakes have heated up considerably since a grand jury declined to indict him on Friday, and the interest in the star quarterback appears to be mutual with at least two teams.

Watson is expected to meet with the New Orleans Saints and Carolina Panthers this week, according to ESPN’s Adam Schefter. Other teams are also in the mix.

Texans’ QB Deshaun Watson is expected to meet in the next 48 hours with the Carolina Panthers and New Orleans Saints, amongst other teams, per league sources. Watson wants to meet with them just as they want to meet with him before trade talks ramp up.

Watson has a full no-trade clause in his contract with the Houston Texans. The team has given him permission to meet with potential trade suitors. If Watson did not want to play in New Orleans or Carolina, he probably would not bother talking to either team.

A report over the weekend claimed the Saints and Panthers have both made formal trade offers for Watson. Carolina has been aggressively pursuing Watson for quite some time.

Watson wants out of Houston, but the no-trade clause gives him control over his future. There has been talk that he is not willing to play for at least one NFC team.

Report: 2 NFC teams have made trade offers for Deshaun Watson

The list of teams that have interest in Deshaun Watson is growing by the day, and at least two potential suitors have reportedly made formal offers for the star quarterback.

The New Orleans Saints and Carolina Panthers have made offers for Watson, Ian Rapoport of NFL Media reports. The Houston Texans have given Watson permission to speak with interested teams.

Notes:
1. Yes, the #Saints can fit him under the cap.
2. The #Texans will work with Watson and grant permission for him to speak with teams with real offers.
3. The #Panthers have been interested for a year and have never waivered https://t.co/Dc3p9rvMGp

A grand jury on Friday declined to indict Watson following an investigation into sexual assault allegations from multiple women. Watson could still be suspended after the NFL conducts its own investigation, but there would be much less risk now in trading for him. That has seemingly opened the floodgates for Houston.

Watson has a full no-trade clause, so the Texans have to work with him in order to get a deal done. The Panthers have been aggressively pursuing Watson for quite some time. A surprise team also reportedly entered the mix recently. Houston should get plenty in return for the three-time Pro Bowler.