Deshaun Watson’s legal situation was resolved Friday, meaning trade talks are expected to intensify in the days to come. There remain some conflicting rumors regarding which teams the Houston Texans will be hearing from, but a new report suggests five are seriously in the running.

The Carolina Panthers, New Orleans Saints, Cleveland Browns, Seattle Seahawks, and Pittsburgh Steelers were the five teams that have been most closely tracking developments with Watson, according to Kimberley A. Martin of ESPN.

The teams I’ve been told that have been interested in Deshaun Watson for a while — and/or were closely monitoring today’s grand jury outcome:

PHI had expressed interest, but seems to have cooled of late. https://t.co/28CqiuHyAZ

Some of these teams are probably longer shots than others. The Steelers, for instance, may be looking but unlikely to pursue a deal. The Browns and Saints also have alternate plans at quarterback and may just be looking into Watson’s trade value.

The Panthers and Seahawks seem to be the teams to watch. Carolina’s interest is long-standing, while Seattle may be the favorite after trading Russell Wilson.

Watson could still be suspended, and he still faces multiple civil suits. However, those will be of lesser concern to NFL teams than a criminal case would have been. The Miami Dolphins made a run at hiring Sean Payton away from the New Orleans Saints, but their efforts were denied.

Speaking with reporters from the NFL Scouting Combine on Wednesday, Dolphins general manager Chris Grier confirmed a rumor that the team had interest in Payton.

Grier says the Dolphins checked with the Saints for permission to talk with Payton prior to the coach stepping away.

Chris Grier said Dolphins did look into Sean Payton this cycle before he retired, but Saints did not grant permission to talk. He said there were never conversations with Jim Harbaugh.

Payton ended up stepping away from football and has interest in a possible TV job. With an unconvincing class of rookie quarterbacks coming through the NFL Draft, a number of teams are eyeing veteran help at the position. A new report suggests six teams in particular are quite focused on available quarterbacks.

The Commanders, Colts, Buccaneers, Saints, Panthers, and Steelers are surveying the quarterback market, according to Jeff Howe of The Athletic. Washington has been particularly aggressive, while the Saints are among the teams more casually assessing available options.

None of these teams are particularly surprising. The Buccaneers and Steelers had Tom Brady and Ben Roethlisberger retire, while the Commanders, Colts, and Panthers got poor quarterback play for the bulk of 2021. The Saints appear to know which direction they’re leaning, but are doing their due diligence.

This is almost certainly not an exhaustive list. Some other teams are reportedly eyeing the market to at least see what comes available. However, these six teams are definitely among the most intriguing to watch during the offseason, as they figure to be active. 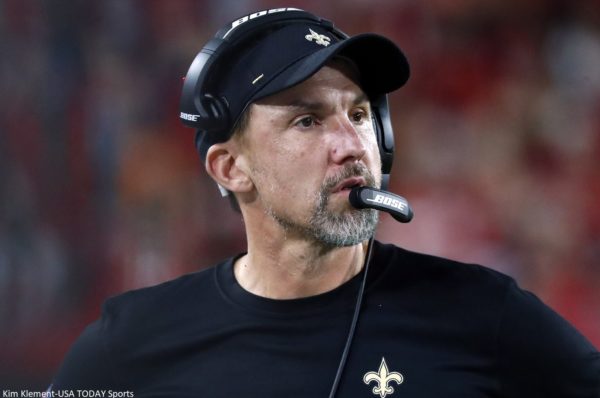 The New Orleans Saints are facing a number of changes this offseason, and that could include the quarterback position. However, a new report suggests that the organization is hoping to stick with a familiar figure for 2022.

The Saints are expected to open contract talks with Jameis Winston imminently and may have already done so, according to Jim Trotter of NFL Network. Winston and the Saints are comfortable with each other, and Winston is knowledgeable about the system that longtime offensive coordinator Pete Carmichael will continue to run.

Winston started for the Saints in 2021, but his season ended prematurely when he tore his ACL in October. Though the injury comes with a lengthy recovery period, there is some optimism that he may be ready for the start of the season.

Winston threw 14 touchdown passes and three interceptions in 2021, and the team was 5-2 in games he started. Perhaps the Saints could upgrade, but it is sensible that they might choose to stick with familiarity at this point. The New Orleans Saints have offered up the clearest signal yet that wide receiver Michael Thomas will be back with the team in 2022.

The Saints restructured Thomas’ contract and converted $14.6 million of salary into a signing bonus, allowing the team to spread the cap hit for future years, according to Mike Triplett of ESPN. If the Saints were to trade Thomas, they would be responsible for paying all the cap charges this year.

In other words, the contract restructure all but ensures that the Saints will be keeping Thomas in 2022. The decision would make no sense if they didn’t.

Thomas and the Saints had a bit of a falling out last summer over how Thomas dealt with an injury. Things are apparently going much more smoothly so far this offseason. This move is clear evidence of that as well.

Wide receiver Michael Thomas spent the 2021 season on the sidelines and somewhat at odds with the New Orleans Saints. A new report suggests that both sides are ready to turn the page on that ahead of 2022.

The Saints do want Thomas back and the two sides have been communicating regularly, according to Ian Rapoport of NFL Network. The prospect of a Thomas trade now appears to be off the table, and Thomas has been focused on rehabbing after undergoing a second surgery on his foot.

The fact that Thomas and the Saints have been in communication is significant. That was one of the major issues last offseason, when Thomas reportedly blew off the organization when rehabbing the injury last offseason. That hastened tensions between the two sides, and there seemed to be a legitimate chance at one point that he’d played his last game for New Orleans.

Thomas posted a dominant 2019 season, racking up 1,725 receiving yards en route to AP Offensive Player of the Year honors. Injuries slowed him in 2020, and 2021 proved to be totally lost due to setbacks with his ankle. He has not played since the Saints’ 2020 season-ending loss, which saw him saddled with an unflattering nickname after a brutal performance. That should make him pretty motivated to return healthy and productive in 2022.

The New Orleans Saints have decided on a replacement for Sean Payton, and they are promoting from within.

The Saints have informed Dennis Allen that he will be their next head coach, ESPN’s Adam Schefter reports.

Allen has been the Saints’ defensive coordinator since 2015. This is his second stint with the team, as he was also an assistant coach in New Orleans from 2006-2010. The 49-year-old also has previous head coaching experience. He went 8-28 with the then-Oakland Raiders and got fired in his third season with them.

New Orleans has been in the top five in the NFL in points allowed for two seasons in a row. Allen coached the Saints this season while Payton was out due to health and safety protocols, and the Saints shut out the Tampa Bay Buccaneers in a win.

The Saints cast a wide net with their search to replace Payton, who stepped down last month. They also interviewed Brian Flores and Kansas City Chiefs offensive coordinator Eric Bieniemy.

The Allen hire bucks the recent trend of teams hiring young offensive coordinators as head coaches, but it is not a surprise move. Payton stunned the Saints when he stepped down, and they are likely hoping Allen will help maintain some stability in the post-Payton era.

Eric Bieniemy could be head coach target for NFC team

Kansas City Chiefs offensive coordinator Eric Bieniemy has long been named as a potential head coach candidate, and one NFC team may be ready to give him a shot.

The New Orleans Saints want to interview Bieniemy for the team’s vacant head coaching position, according to ESPN’s Jeremy Fowler. With the Chiefs eliminated from the playoffs, an interview is possible by the end of the weekend.

The Saints want to speak with Chiefs OC Eric Bieniemy for the head coaching job, per sources. An interview could take place Saturday.

The Saints are casting a wide net as they look to replace Sean Payton. There does appear to be a focus on offensive coaches, though Brian Flores has interviewed and considered as well.

Bieniemy has long been talked about as a potential head coach, and was even linked to a prominent college job this past year. The Saints are arguably one of the best openings still available, so if Bieniemy is being picky, this might pass the test for him.

Byron Leftwich was said to be nearing a deal to become the next head coach of the Jacksonville Jaguars earlier this week, but the New Orleans Saints may want a say in the matter.

The Saints are suddenly searching for a new head coach after Sean Payton announced he is stepping away from the team. According to ESPN’s Adam Schefter, they have requested permission to interview Leftwich.

Leftwich was drafted by Jacksonville in the first round back in 2003 and started 44 games for the Jags. He has spent the last two seasons working with Tom Brady, which has boosted his resume significantly. You can understand why Jacksonville would be intrigued by the idea of having him work with Trevor Lawrence.

A report on Tuesday claimed Leftwich and the Jags were finalizing a deal, but it appears that was premature.

It also makes sense that the Saints have interest in Leftwich. The 42-year-old has been the offensive coordinator of the Tampa Bay Buccaneers for the last three seasons, so he has experience in the NFC South.

Leftwich may end up with his choice of jobs this offseason.

Many NFL teams have already begun the process of searching for a new head coach, and some are in the final stages of making a decision. Now the New Orleans Saints are joining the ranks of those looking for a new coach.

Sean Payton informed the Saints on Tuesday that he is stepping down as their head coach. The Saints have some big shoes to fill, and one reporter thinks they already have a few names in mind to consider.

ESPN’s Mike Triplett wrote on Monday that the Saints would likely look to internal candidates while also considering some other external candidates if Payton were to step down. At the time Triplett wrote his story, he said Saints defensive coordinator Dennis Allen and offensive coordinator Pete Carmichael Jr. would likely receive consideration for the head coach job.

Carmichael, 50, has been with the Saints since 2006 when Payton joined the team. He has served as their offensive coordinator since 2006. The offense has been in the top five in the league in points scored 10 times since 2006, including number one twice.

Allen, 49, is in his second stint with Payton’s Saints. He has been their defensive coordinator since 2015. He has previous head coach experience as he went 8-28 with the Raiders and got fired in his third season with them. The Saints’ defense has been in the top five in points allowed for two seasons in a row. Allen coached the Saints this season while Payton was out due to health and safety protocols, and the Saints shut out the Bucs in a win.