New York Mets ace Max Scherzer may be back on a major league mound sooner than originally predicted.

The New York Post’s Jon Heyman reported on Sunday that Scherzer could make his return as early as next Sunday against the Marlins in Miami.

Scherzer, who has been out with an oblique injury since May 18, is scheduled to pitch in a minor league rehab start on Tuesday. According to Heyman, if all goes well, Scherzer will be in “consideration” to start Sunday. Heyman also said that the Mets aren’t providing a public return date for Scherzer due to any potential setbacks he might have.

On Wednesday, FOX’s Ken Rosenthal reported that the best-case scenario for the 37-year-old Scherzer would be a return in late June.

The Mets have played well in Scherzer’s absence and can afford to take their time with him to make sure he’s fully healthy for the second half of the season. During the fourth inning of Saturday’s game between the Mets and Los Angeles Dodgers, Betts came to the plate with two outs and one runner on base. Betts, representing the tying run, lined a first pitch curveball from Peterson just foul. Showalter immediately made a beeline to the mound to take out Peterson and bring in Colin Holderman, who struck Betts out to end the inning.

With the way Betts has been swinging the bat recently, it’s hard to blame Showalter for the quick hook on Peterson.

In his last seven games, Betts has 11 hits, including 3 home runs and 5 RBI in 29 at-bats. He did have a slow start to the season, however.

As for Peterson, he had thrown 90 pitches over 3.2 innings, so he wasn’t exactly sharp.

Mets owner has funny response to question about $300 million payroll

The New York Mets are hot to the touch, getting off to a 35-19 start this season. They have the second-best record in the NL and their +70 point differential is third among MLB teams. But owner Steve Cohen is not satisfied.

“I will never feel satisfied. That’s not who I am,” Cohen said on Friday, via the New York Daily News. “I’m always trying to figure out where else we can go next. I’m always in a state of constant improvement, and that’s the way I want this organization to work.”

The MLB trade deadline is August 2, which gives Cohen roughly two months to wheel and deal. But how much more payroll can he afford to add? After all, the Mets already lead the league with a payroll above $260 million (as things currently sit).

Could we see New York make a move that pushes them over the $300 million mark?

It’s a lot more fun when the team is winning. If the Mets were on the opposite end of the spectrum, the prospect of spending more than $300 million in payroll certainly wouldn’t be nearly as amusing. But Cohen has put in the time and the work, and now the results are beginning to pay off.

Dodger Stadium is a real dump, at least if you ask one rival NL team.

The New York Mets had a complaint about the Los Angeles Dodgers’ home ballpark during their series against each other this week. According to Mike Puma of the New York Post, the Mets grumbled that the Dodger Stadium video room is “dingy” and “smells like rat urine.” They also believe that the working conditions at the ballpark are below MLB standards, Puma adds.

The “rat urine” description is oddly specific. Perhaps the Mets are well-accustomed to that smell with the large rat population in New York City.

In any case, Dodger Stadium is one of the oldest parks in Major League Baseball, having been around since 1962. Only Wrigley Field (1914) and Fenway Park (1912) are older. While Dodger Stadium has generally been complaint-free over the years, they have had some infrastructure-related issues in the past.

Prior to Thursday’s game against the Los Angeles Dodgers, Mets manager Buck Showalter provided an injury update on the ace.

“He’s doing fine,” Showalter said. “Who know’s what he’s doing away from the field. He’s probably had four or five sides [bullpen sessions] by now. His want-to is off the charts. From what we can tell, he’s doing well.”

Buck Showalter jokes that Max Scherzer has probably thrown 4-5 side sessions in his recovery:

"Can't really follow him home. Probably has the neighborhood hitting off him" 😂 pic.twitter.com/pOt3nFxaXQ

Scherzer strained his oblique in a May 18 start against the St. Louis Cardinals. The initial timeline for his return was 6-8 weeks. One MLB reporter thinks that Scherzer could be back around the All-Star break.

Even with their success without him, the Mets will surely welcome Scherzer back with open arms. In eight starts, he has a 5-1 record and a 2.54 ERA with 59 strikeouts and 11 walks in 49.2 innings. 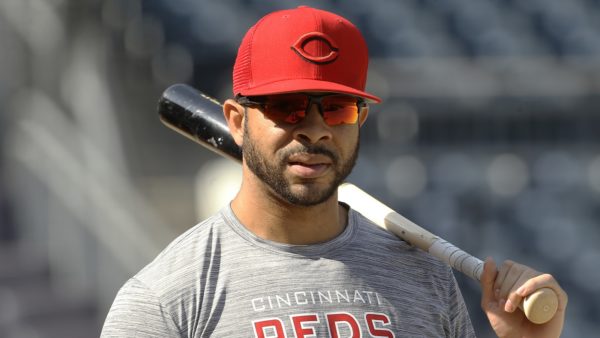 The bizarre fantasy football spat between Joc Pederson and Tommy Pham has been great for jokes since it erupted Friday. Even the New York Mets’ scoreboard operators are getting in on the act.

As part of a betting promotion, the Mets put some odds on the Citi Field scoreboard during a break in play Sunday. Among them were the odds of a “fantasy football dispute,” a clear nod to Pham and Pederson.

In case you missed it, Pham, a Cincinnati Reds outfielder, got himself a three game suspension for slapping Giants outfielder Pederson over a fantasy football beef. Pederson even brought the receipts to add context to the situation.

There is at least a chance that two MLB players have had a disagreement over fantasy football. They probably just handled it behind closed doors, unlike Pham.

The New York Mets have faced a slew of injuries to their pitching staff recently. The team placed ace Max Scherzer on the injured list with an oblique strain on May 19, and placed Tylor Megill on the 15-day injured list with biceps tendinitis before then.

But arguably their most important starter could make his return as early as next month.

On Tuesday’s edition of “The Show” podcast, hosted by the New York Post’s Jon Heyman and Joel Sherman, Heyman reported that he’s heard Jacob deGrom could return as soon as late June.

“deGrom, I finally heard a timetable,” Heyman said (as transcribed by Audacy.com). “Somebody with the Mets told me late June. To me, that seems optimistic. I’m looking at July, I think him and [Max] Scherzer coming back around the All-Star break makes sense.”

The Mets recently released an update stating that deGrom, who suffered a stress reaction in his right shoulder during spring training, was improving. They did not provide a public timetable for his return, however.

On Tuesday, deGrom was captured on video throwing on flat ground at Citi Field:

Was at Citi Field today and saw a certain somebody playing catch with a big ole smile on his face 👀 #Mets pic.twitter.com/lfr0y2YcNG

Getting deGrom back would undoubtedly provide a big boost for the Mets. In 15 starts last season, the 34-year-old had a 1.08 ERA with 146 strikeouts and 11 walks.

But the team might be able to wait until after the All-Star break based off of how well they’re playing in his absence.

Entering Tuesday, the Mets were 29-15 and had an eight-game lead over the Philadelphia Phillies. Their pitching staff was one of the best in baseball, boasting the seventh-lowest ERA (3.40) and sixth-lowest WHIP (1.13) in MLB.

Jacob deGrom has not pitched in the regular season for the New York Mets since last year, but all signs point to a return in the not-too-distant future.

On Tuesday, the Mets released an update on deGrom’s health. In spring training, deGrom suffered a stress reaction in his right shoulder. According to the latest MRI, the two-time Cy Young Award-winner’s injury is improving.

He underwent follow-up imaging yesterday that revealed continued healing in the scapula. He will continue to build distance and velocity in his throwing program, and we will provide an update on his progress when appropriate. pic.twitter.com/MwuVCxjaQS

“[deGrom] underwent follow-up imaging yesterday that revealed continued healing in the scapula,” the team wrote. “He will continue to build distance and velocity in his throwing program, and we will provide an update on his progress when appropriate.”

The Mets did not give a specific timetable for his return, but given the fact that he isn’t throwing from a mound just yet, it may be a while before we see him in a game.

The right-hander started throwing off of flat ground last week.

When healthy, deGrom is arguably the best pitcher in the sport. In 15 starts last season, the 34-year-old had a 1.08 ERA with 146 strikeouts and just 11 walks.

The Mets haven’t skipped a beat in deGrom’s absence, however.

The team entered Tuesday 23-13 and at the top of their division.

Adding a healthy deGrom back into a rotation that already features Max Scherzer, Chris Bassitt and Carlos Corrasco will further bolster what has already been a strength for the team this season.

Mets get lift from ‘Rally Rat’ against Nationals While we have heard of “Rally Cat” and “Rally Squirrel” before, these good luck charms are starting to get a little bit ridiculous.

The New York Mets and the Washington Nationals got an unexpected visitor during their game on Tuesday — a rat that ran across the outfield grass in the sixth inning.

A Rat has made its way to DC @Starting9 pic.twitter.com/qpyb6pPccS

No, this was not a promo for the new “Stuart Little” movie. But it did end up sparking the Mets, who ended up breaking the 2-2 tie with a sac fly from James McCann on the very next pitch after the rat appeared. They also tacked on another run in the ninth inning and won the game 4-2.

That led to Mets fans embracing the power and prestige of “Rally Rat.”

The rally rat wanted to deliver you a Mets W 🐭 pic.twitter.com/cj8GAIKaUd

WE GOT A RALLY RAT! 🐀 #LGM pic.twitter.com/HXGjxzSxs6

The Mets are a division-leading 21-10 this season, so they have been doing pretty well for themselves, rodents notwithstanding. But “Rally Rat” has to be the wildest creature on a baseball field since this one at a college game.