The New York Yankees’ performance in the ALCS was poor, to say the least. That prompted a strong fan backlash during Games 3 and 4 at Yankee Stadium, one that apparently left some players feeling sour.

Multiple Yankees players told their agents that playing in Games 3 and 4 was “an unusually brutal experience” on account of the frequent booing that even the team’s starts were faced with, according to Andy Martino of SNY. Players were particularly stunned that even Aaron Judge heard some boos after struggling throughout the series.

Martino adds that some within the organization were surprised by the fan and media reaction to the ALCS loss in recent days, with some characterizing the anger as the most intense in recent memory.

Don’t expect the fans to be sympathetic to this point of view. The Yankees won 99 games and were regarded as a World Series favorite throughout the season, and were carried by Judge’s 62 home runs. That raised expectations for the playoffs, and the World Series-or-bust mentality that typically surrounds the team was even more intense this season.

A big part of the problem is not that the Yankees were eliminated — it’s how they were eliminated. They got swept by a hated foe in the Astros, and star players went missing, with Judge hitting .063 in the series. Combine that with the preventable mistakes that cost them close games and you have a recipe for a lot of fan fury, even if some of it may have been over the top. New York Yankees fans had some fun with Josh Naylor on Tuesday during Game 5 of the ALDS.

After Naylor lined out in the top of the sixth inning with his Cleveland Guardians down 5-1, Yankees fans taunted the Guardians designated hitter. They taunted him with “who’s your daddy?” chants.

Other fans mocked Naylor over his “baby” gesture following a home run off Gerrit Cole in Game 4.

He's not living this down pic.twitter.com/1Ni8xWSRLJ

Naylor was pretending to rock a baby and was saying that he was Cole’s father after homering off the Yankees ace. Cleveland lost Game 4 and they were down in Game 5 when Yankees fans taunted him.

Yes, the Yankees can point to the scoreboard on Naylor. Myles Straw had some negative things to say about New York Yankees fans earlier this year, but he’s trying to make amends now.

The deciding Game 5 of the ALDS between the Yankees and Cleveland Guardians was in a weather delay on Monday night. While the game was being delayed, Straw and Will Brennan started to throw around a football on the field.

The players then started to play catch with some fans.

They did try to include the crowd… (until #Yankees security shut it down! 😂) pic.twitter.com/ok9L0GIGQw

Things were going great until security intervened and put an end to the fun and games.

The game was originally supposed to start at 7:07 p.m. ET, but the start was delayed by rain.

In April, Straw got into it with Yankees fans at the end of a 5-4 loss in the Bronx. He called Yankees fans “classless” and the “worst fan base on the planet.”

Six months later, he appears to have moved past that and is now at least playing catch with them. Aaron Judge on Tuesday night hit his 60th home run of the season in the New York Yankees’ 9-8 win over the Pittsburgh Pirates, and some fans did something cool with his home run ball.

Judge led off the bottom of the 9th with a solo home run to cut Pittsburgh’s lead to 8-5. Here is a look at the home run:

The home run was Judge’s 60th of the season, making him just the third ever American League player to hit 60 home runs (fellow Yankees Roger Maris and Babe Ruth are the others).

20-year-old fan Michael Kessler, who attended the game with three friends, got Judge’s home run ball. He gave it to the Yankees slugger, feeling it was his to have since he accomplished the feat.

Yankees got Aaron Judge’s 60th homer ball back. Four college kids had it, told security they wanted Judge to have it, that it was his accomplishment.

The Yankees arranged for a meet-and-greet between the four fans and Judge. The Yankees outfielder hooked up the players with autographed memorabilia in exchange for the 60th home run ball back.

Met the man himself! I live with that guy @mikess1211 judge is the nicest guy pic.twitter.com/GhBlE5uE3B

Aaron Judge got the 60th HR ball back. Four fans shared a clubhouse meet and greet that includes photos with Judge. They each got signed balls, and the fan who caught the ball got a signed bat, per Yanks PR.

The fun didn’t end with Judge’s home run. The Yankees kept the rally going with a double, walk and single to load the bases. They won on a walk-off grand slam by Giancarlo Stanton.

Yankees fans may demand a lot out of their players and have high standards, but they can also be classy, like these kids. Crazy or genius? That’s what folks on the internet are debating about a New York Yankees fan who went viral for his crazy concession concotion on Monday night.

The fan in question was attending the Yankees-Mets game at Yankee Stadium and had field level seats. He was recorded on video by another fan using a straw to burrow a hole through the middle of his hot dog. Then, the fan dropped the hot dog in a cup of beer and used the hollowed-out hot dog as a straw.

At first I thought he was dipping his dog in the beer, which would make plenty of sense since some brats are beer-flavored. But once you see him using it to drink, that’s where things get weird.

It’s one thing to take a licorice stick and drink out of your beverage with it, but using a hot dog as a straw? That’s something else entirely.

What do you think: genius or gross move by the fan? 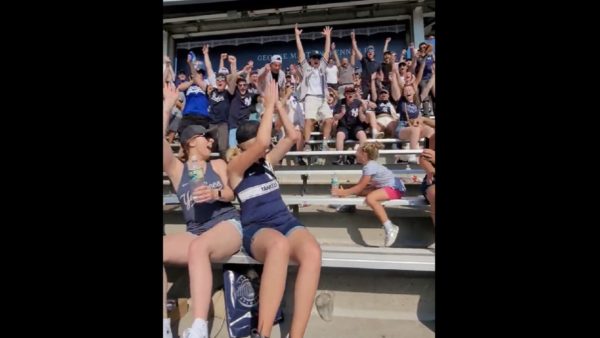 A video shared by a fan in attendance showed a bunch of fans watching a young girl flipping a bottle. The girl was trying to flip the bottle to get it to land standing up.

The intensity built as she got closer and closer until she finally landed it. That’s when the section broke out in celebration:

This girl had the whole section rooting for her bottle flip pic.twitter.com/CxSyGP7OKx

The whole section went nuts, including the young girl, who celebrated by pouring the water down her back.

According to the fan who shared the video on Twitter, the bottle flip occurred while the game was tied in the bottom of the 9th inning.

Fans paid to watch a game between the Yankees and Astros and got to enjoy a game within the game. David Ortiz is a Hall of Famer and did major damage against numerous teams throughout his MLB career. But some of his finest and most memorable moments came against the rival New York Yankees.

Ortiz’s big hits against the Yankees may have made him despised by fans of the Bronx Bombers, but they also led him to be highly respected by the team’s fans.

Ortiz joined the “R2C2” podcast with CC Sabathia and Ryan Ruocco for an episode published on Thursday. In the episode, Ortiz shared the compliment he receives from Yankees fans.

That is how you know the rivalry is a healthy one.

The fans may hate the opposing teams and their players, and the players may hate each other while their on opposing teams. But at the end of the day, there is a lot of mutual respect between competitors. It even goes that way for the fans with Ortiz. A young New York Yankees fan was robbed of receiving a foul ball from Aaron Judge on Tuesday night and was extremely distraught.

Judge was attempting to give the young fan a foul ball and seemed to try and place it in the fan’s glove. But there were about three people competing for the ball, and another fan grabbed it instead.

Aaaaaaand someone took it from him. pic.twitter.com/ZTWfL7b5su

Yes, it surely was some grand theft.

This goes directly in contrast with what happened at a Blue Jays game on a ball hit by Judge.

How can the one fan feel good about the ball knowing he stole it from the intended recipient? Aaron Judge hit yet another home run on Tuesday night, and the New York Yankees slugger was very pleased to find out what happened to the ball.

Judge blasted a 427-foot home run in the top of the sixth of his team’s 9-1 win over the Toronto Blue Jays. A Jays fan in the upper deck at the Rodgers Centre grabbed the ball and quickly handed it to a young Yankees fan who was seated near him. The boy, who was wearing a Judge T-shirt, was overcome with emotion.

Aaron Judge destroys a baseball for a HR. It’s caught by a Jays fans. He gives it to a young kid wearing Yankees gear and makes his whole life. Beautiful. pic.twitter.com/LqC9LHJ2l8

A reporter told Judge after the game about what had happened.

The Blue Jays fan certainly did not have to do that, but the boy’s reaction undoubtedly made it worthwhile. That was an awesome moment. 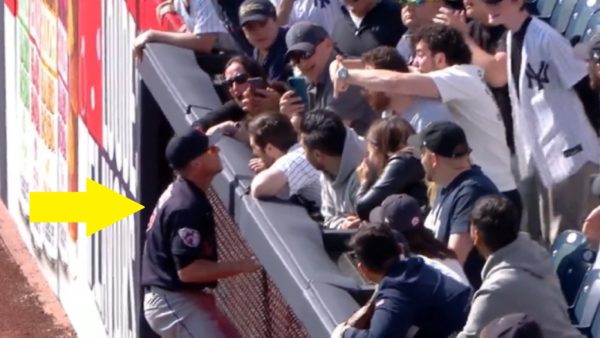 The Yankees beat Cleveland 5-4 on Saturday on a walk-off hit by Gleyber Torres. After the walk-off hit, Yankees fans began throwing trash at Cleveland players in right field (video here).

There is some context to the matter.

The batter before Torres had his walk-off hit was Isaiah Kiner-Falefa, who delivered a game-tying RBI double. Cleveland left fielder Steven Kwan hurt himself running into the wall trying to chase down Kiner-Falefa’s double.

Steven Kwan is a warrior. 90 percent of guys in the league would curl up and wait for the CF to get this ball potentially losing the game. pic.twitter.com/nM6hxj9ZC8

Straw, who was in center field, did not appreciate what some Yankees fans said to Kwan after the play. He climbed the right field wall to confront the fans.

Cleveland’s players were not happy with the treatment they received from the opposing fans. Straw took his displeasure to another level, calling Yankees fans “classless” and the “worst fan base on the planet.”

“I’m not talking. I’ll let the fans talk for me. Classless… Worst fan base on the planet,” Straw said of Yankees fans, via The Athletic.

Yankees fans were certainly wrong for throwing crap onto the field after the game. But for as much as Straw wants to point the finger at Yankees fans, he was wrong too. A professional ballplayer should not be climbing fences to get in the faces of opposing fans and escalating tensions.

Straw even said after the game he didn’t regret his actions.

"If I were to do it again I probably would've said the same thing."

Myles Straw doesn't regret defending his teammates at the end of the game. #ForTheLand pic.twitter.com/kyWioAoWwu

Yankees fans were classless for their actions, but what does that make Straw considering he stooped to their level?