The LFL emailed the following statement to many media outlets including LBS to let the truth be known about how unqualified the replacement refs were:

“Because of the LFL’s perception it is that much more critical for us to hire officiating crews that are competent, not only for the credibility of our game but to keep our athletes safer,” commissioner Mitchell Mortaza said in a statement. “Due to several on-field incompetent officiating we chose to part ways with with a couple crews which apparently are now officiating in the NFL. We have a lot of respect for our officials but we felt the officiating was not in line with our expectations.

END_OF_DOCUMENT_TOKEN_TO_BE_REPLACED

The Packers were livid after being robbed of a 12-7 victory over the Seahawks by the replacement officials who gave the Seattle a 14-12 win on a controversial call to end “Monday Night Football.” Offensive lineman T.J. Lang was the most vocal Packers player after the game, dropping f-bombs on Twitter:

END_OF_DOCUMENT_TOKEN_TO_BE_REPLACED

Seahawks given win over Packers on controversial Hail Mary

If there was a call by the replacement referees controversial enough to spur a settlement between the NFL and the regular officials, this was it.

The Seahawks were given a 14-12 win over the Packers on Monday Night Football after the referees awarded Seattle wide receiver Golden Tate a 24-yard touchdown catch on the final play of the game though it was clear he didn’t control the ball.

Most fans, media members, commentators, and impartial viewers agreed that safety M.D. Jennings intercepted the pass. He possessed it and appeared to control the ball. It was only after Jennings had the ball that Tate seemed to wrestle it from him. And as you can see in the image below, the referees disagreed on the ruling of the play:

END_OF_DOCUMENT_TOKEN_TO_BE_REPLACED

Larry Foote reportedly told replacement refs ‘you should kill yourselves’ As bad as the replacement officials have been over the first three weeks of the season, there remains a line that coaches and players should not cross. Arguing calls is one thing, but coaches shouldn’t be grabbing refs after the game or chasing them down in the locker room and swearing at them. And players certainly shouldn’t be saying what Larry Foote reportedly said to the officiating crew after Pittsburgh’s loss to Okland.

According to Jory Rand of KDKA-TV in Pittsburgh, the Steelers linebacker made it a point to get to the locker room at the same time as the officials following the game.

Rand said several officials turned their heads to see who had yelled it. He also said Foote had left the room by the time reporters got the chance to ask him about his comment.

Foote was likely angry over what he thought was a chop block against Steelers defensive end Ziggy Hood in the fourth quarter during the Raiders game-winning drive. Hood was injured on the play and had to be helped off the field. Foote was seen arguing with the officials following the no-call.

It doesn’t really matter what calls the refs made or should have made during the game — there’s no excuse for saying something like that. The refs have made some horrible calls and you can understand why Foote was frustrated after a tough loss, but there has to be some level of respect toward the officiating crew. Add the Steelers linebacker to the never-ending list of coaches and players who could be fined this week. It seems everyone is upset with the NFL’s replacement officials these days, but some are able to handle it better than others. Generally speaking, the coaches and players from losing teams are more upset with the refs than those who won. Shocking, I know. After the Redskins lost to the Bengals on Sunday, Washington offensive coordinator Kyle Shanahan was seen chasing down and reportedly berating a replacement official in the tunnel heading into the locker room.

END_OF_DOCUMENT_TOKEN_TO_BE_REPLACED 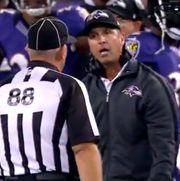 As Brandon Spikes already phrased more eloquently than we ever could, the replacement officials were as bad as they have been all year during Sunday night’s game between the Patriots and Ravens. Their performance resulted in 70,000-plus fans reaching their boiling point toward the end of the game when John Harbaugh received an unsportsmanlike conduct penalty. Harbaugh claims he was trying to call timeout which may not be true, but how often do we see coaches getting flagged for unsportsmanlike conduct during such a crucial moment in the game?

On one hand, the terrible calls are an outrage. On the other, we can’t be too upset about it because it lead to one of the most audible “bullsh**” chants you will ever hear from a stadium full of fans. We’ve seen fans taunt opposing players and they can certainly get vulgar at times, but I’m pretty confident the women and children were in on this one. That’s how bad this replacement ref situation has gotten.

Still, I don’t think the Baltimore fans were quite as angry as Bill Belichick. 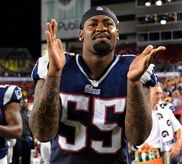 Sunday night’s game between the Ravens and Patriots was one of the most poorly-officiated games the NFL has ever hosted — for both sides. New England should not use the replacement refs as an excuse for why they lost the game since the officiating was atrocious all around. There were 24 accepted penalties throughout the course of the game, and an NFL record 13 of those resulted in first downs. After the game, Patriots linebacker Brandon Spikes had some harsh words for the officiating crew on Twitter.