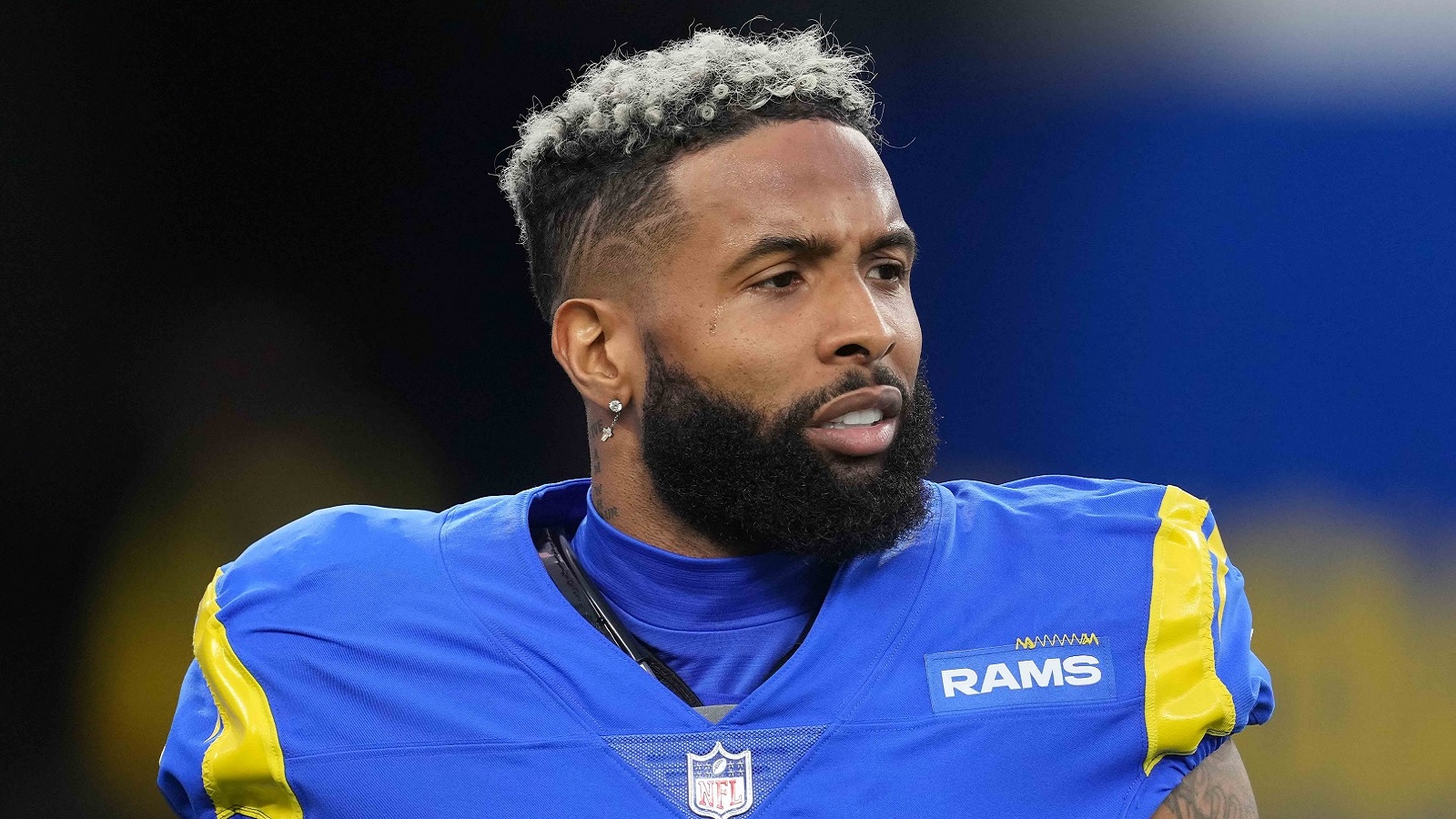 Wide receiver Odell Beckham Jr. was headed into a potentially lucrative free agency period prior to tearing his ACL in Super Bowl LVI. But even despite that, the Los Angeles Rams were public about their desire to re-sign him.

That was good news for Beckham, who tore the same ACL in 2020.

As it turns out however, teams are not exactly shying away from OBJ despite the second ACL tear. In fact, multiple teams have reportedly joined the Rams in their interest in Beckham.

Rams free-agent wide receiver Odell Beckham Jr. is recovering well from his ACL injury, per source. He isn't expected to be ready for the start of the regular season, but there are multiple teams interested in him. A return to the Rams is also a possibility.

Beckham, as Dragon notes, is progressing well in his rehab but won’t be ready in time to start the 2022 regular season. He’s likely to begin the year on the reserve/physically unable to perform list, which would mean missing at least six weeks before returning. That will drive Beckham’s price down a bit, but clearly isn’t hindering interest.

In 96 career games, Beckham has hauled in 531 receptions for 7,367 yards and 56 touchdowns. However, he’s only ever appeared in a full slate of regular season games twice (2016, 2019) and that’s the primary concern that comes along with him.

Odell Beckham Jr. has reportedly had talks with 1 notable team

Odell Beckham Jr. may find himself on a new team in 2022, and it’s one that would certainly make headlines.

Beckham had preliminary discussions with the New England Patriots at the start of free agency and there appears to be persistent mutual interest, according to Jeremy Fowler of ESPN. Beckham is interested in playing for Bill Belichick, and the Patriots looked at signing Beckham in November when the Cleveland Browns released him. There is “no real rush” on either side to get a deal done, according to the report.

We heard last month that the Patriots had been doing extensive digging into the free agent receiver class. Most of the top names have signed, but Beckham is still available as he recovers from ACL surgery.

Beckham and the Patriots would certainly be intriguing. He would arguably be the team’s No. 1 receiver when healthy, and is certainly a big play threat. The 29-year-old showed he can still be an impact player after last year’s trade to the Rams, catching seven touchdowns between the regular season and playoffs with the team.

Ex-teammate has prediction for where Odell Beckham Jr. will land

One former Odell Beckham Jr. teammate sees something in his crystal ball.

In an Instagram Live video this week, Cleveland Browns safety John Johnson predicted that the star receiver Beckham will return to the Browns.

“OBJ coming back,” said Johnson, per Browns writer Brad Stainbrook. “You ain’t hear it from me though.”

Johnson was Browns teammates with Beckham last season before Beckham was granted his release in November and signed with the Los Angeles Rams. Beckham went on to win the Super Bowl with the Rams but is now a free agent again.

It previously seemed unthinkable that Beckham could return to the Browns given the way his time with them ended. Even Johnson himself threw shade at Beckham on Beckham’s way out. But the Browns just traded for Deshaun Watson, and now Beckham appears to be open to a reunion. Johnson is going a step further here and predicting that it will actually happen.

Odell Beckham Jr. left the Browns in spectacular fashion last season, but that doesn’t mean he has completely closed the door on Cleveland forever. In fact, one report says Beckham would even be open to a reunion with the Browns.

A Twitter user tweeted at Beckham a few days ago that he should “come back” to Cleveland. Beckham didn’t shoot that possibility down.

“Lol that’s an interesting one,” he wrote back (lol is an acronym for “laughing out loud”).

Lol that’s an interesting one

Not only did Beckham not shoot down the possibility of a Browns reunion, but a reporter confirmed that Odell is open to the situation.

Cleveland.com’s Mary Kay Cabot says Beckham is open to a Browns reunion because he liked many of his teammates there and got along with the team’s owners. Beckham’s issue was a lack of chemistry on the field with Baker Mayfield. That was reflected in Beckham’s pedestrian numbers for Cleveland (no touchdowns in 2021), compared to his red-zone excellence with the Rams (five touchdowns in eight regular season games). But the Browns have a new quarterback in Deshaun Watson and plan to get rid of Mayfield.

Given the way Beckham left Cleveland, we definitely wouldn’t count on a reunion. Would the Browns really want him back knowing the way he’s capable of blowing things up if he’s not happy? You know what they say about “fool me once …”

Odell Beckham Jr remains a free agent as he is recovering from ACL surgery, and the star wide receiver is keeping a close eye on what teams are doing around the NFL. He seems particularly excited about one big trade that was made on Monday.

Beckham believes the Indianapolis Colts made a great decision by trading for Matt Ryan. He tweeted early Tuesday morning that he thinks Ryan will do something “special” with his new team.

Random thought …. Bruh I really think Matt Ryan to the colts was actually 🔥, I think bruh will elevate and do sum special over there.

Some will say that is Beckham’s way of trying to pitch his services to the Colts. That’s certainly possible, though the Los Angeles Rams are trying to re-sign him even after making a big splash at the wide receiver position in free agency.

The Colts nearly made the playoffs last season with Carson Wentz, and Ryan should be a significant upgrade over him. It won’t be that hard for Ryan to elevate the Colts to a level above where they were with Wentz. Whether or not the 36-year-old accomplishes something “special” remains to be seen. It will not be easy to fill the Davante Adams-sized hole that the Green Bay Packers now have in their lineup. But some of their players are using grassroots efforts to at least try.

I know Julio still has juice in the tank👀

Of course, none of those players will be remotely sufficient on an individual basis to replace Adams. Jones is 33 and extremely injury-prone, Beckham is coming off a second ACL tear, and Landry will be turning 30 next season as well. But it will take a team effort to replicate the production of the First Team All-Pro Adams, arguably the single best receiver in all of football.

Getting back Aaron Rodgers, who seemed surprisingly OK with Adams’ exit, was a huge boost for Green Bay this offseason. But it would benefit the team to bring in some legitimate reinforcements at receiver instead of just relying on Rodgers to turn water into wine next season. On paper, the Los Angeles Rams signing Allen Robinson would seem to spell the end of Odell Beckham Jr.’s time with the franchise. In practice, that may not necessarily be true.

Reports indicated Thursday that the Rams remain hopeful of bringing Beckham back even after signing Robinson. Any deal with Beckham is expected to take time, according to Jourdan Rodrigue of The Athletic, due in part to Beckham’s ACL injury.

I am also told this move does NOT mean the Rams don't also want to re-sign Beckham. That deal is tricky and may take some time to work out considering injury and eventual return timeline. https://t.co/ZRhJwrZOf0

The Rams have never been shy about collecting weapons. When they originally signed Beckham, they already had Cooper Kupp and Robert Woods holding down the wide receiver position. The fact that Woods got hurt almost immediately made them look smarter for being so aggressive.

Beckham was not the only star the Rams wanted to retain. That did not work out, so perhaps that will add some extra urgency in trying to keep Beckham.

Odell Beckham Jr. only joined the Los Angeles Rams four months ago, but he is already getting territorial.

Ex-Denver Broncos safety Su’a Cravens posted a tweet this week calling on the team to bring back All-Pro linebacker Von Miller, who was traded to the Rams last season but is a free agent this offseason.

Beckham fired back at Cravens by tweeting, “Sorrry [sic] big dawg….. y’all can’t have em back.”

The exchange was all in good fun though, as the two then traded jokes and well wishes.

love bro!!! Hope all is well ur way my g

Likewise brodie. Link when you heal up ! Congrats on the newborn

Miller, who spent the first ten years of his career with the Broncos and was named MVP of their Super Bowl victory in 2015, has been widely linked to a possible return to Denver. Miller himself even appears to be hinting that he could be back in the Mile High City.

It is clear though that Beckham wants Miller back on the Rams next season. The Rams sound confident about their chances of retaining Miller as well. A notable NFL player was mentioned in the Notice of Allegations LSU received from the NCAA during the week.

LSU is facing punishment from the NCAA after being accused of multiple violations. The NCAA accused LSU of a “lack of institutional control,” which is usually the key accusation that suggests significant penalties to sports programs are imminent.

The allegations led the school to fire coach Will Wade despite his relative success as their basketball coach. LSU’s football program may have its hands tied soon too.

The NCAA Notice of Allegations include a mention of $180,000 in payments made to the father of former LSU OL Vadal Alexander.

The allegations also include cash payments made by former LSU wide receiver Odell Beckham Jr. to then-LSU players in January 2020 after the team won the national championship.

The football portion of NCAA's investigation into #LSU was in the final stages of completion.. and then this happened: Odell Beckham handed out about $2,000 worth of Benjamins on the Superdome field after the team won the national title. NCAA reopened the football investigation pic.twitter.com/n5sEgHDI2e

A video of Beckham handing out cash to LSU players went viral at the time (see it here). LSU later claimed the money was fake.

LSU self-reported both the Alexander and Beckham violations in 2020 and self-imposed penalties that they hoped would help their situation with the NCAA. Both incidents still were included in the organization’s Notice of Allegations. LSU banned Beckham from their program for two years as a punishment.

Odell Beckham Jr. has made decision about his future?

Odell Beckham Jr. is set to become a free agent next week, but the star wide receiver may not get that far.

Beckham is expected to re-sign with the Los Angeles Rams before free agency, Aaron Wilson of Pro Football Network reports.

“Look for OBJ to be back with the Rams at some point,” a source told Wilson. “It’s a strong fit, and they know what he can do, and he loves it there. He’s not leaving.”

Beckham tore his ACL in the Super Bowl, which will likely have an impact on his next contract. He would still draw plenty of interest on the open market, but he has said he wants to remain with the Rams. General manager Les Snead made it clear last week that the interest is mutual.

Though he tore his ACL in the second quarter of the Super Bowl, Beckham played a big role in L.A.’s win over the Cincinnati Bengals. He caught the first touchdown of the game to give the Rams an early lead.

Should Beckham not re-sign with the Rams, at least one AFC powerhouse is said to have interest in him.