One Brooklyn Nets player will continue his quest for his first NBA championship on a different team.

The Athletic’s Shams Charania reported Thursday that the Nets and forward Paul Millsap have agreed to find Millsap a new NBA team where he will be able to have a larger contribution.

Millsap, a four-time All-Star, had been getting very few minutes this season, his first with Brooklyn. He averaged just 3.4 points and 3.7 rebounds in 11.3 minutes per game across 24 appearances. Charania adds that Millsap had played in just two of the Nets’ last 17 contests as well.

The soon-to-be 37-year-old Millsap is no longer starting-caliber. But he is a perfect glue guy off the bench and brings 16 years of NBA experience to the table. Given the teams that were interested in Millsap last summer, there should be several good landing spots out there for him. The LA Clippers may be looking to sign a player who helped down them in the playoffs two years ago.

Shams Charania of The Athletic reported on Monday that the Clippers are interested in signing veteran forward Paul Millsap. Charania also names the Chicago Bulls as another team in pursuit of the unrestricted free agent.

Millsap is one of the oldest active players in the league at 36. But he still had respectable averages of 9.0 points and 4.7 rebounds in 20.8 minutes a game last season for the Denver Nuggets. Millsap also single-handedly ignited Denver’s 3-1 comeback against the Clippers in the 2019 playoffs with a 14-point third quarter in Game 5 that swung the momentum of the series.

The Clippers managed to re-sign Nicolas Batum and add Justise Winslow this summer. But there is still a decent-sized hole in their frontcourt with Kawhi Leonard likely out for the season and both DeMarcus Cousins and Patrick Patterson still unsigned. Millsap does have some other opportunities that may pose a slightly better shot at title contention next year. The presumptive fit with the Clippers is definitely a strong one though.

Paul Millsap is still looking for his first NBA championship, but he could be getting his best shot at winning it next season.

Mike Singer of the Denver Post reported this week that both the Golden State Warriors and the Brooklyn Nets are interested in the veteran forward.

Millsap, a four-time All-Star, averaged 9.0 points and 4.7 rebounds in 20.8 minutes a game last season for the Denver Nuggets. Those were the lowest numbers for the 36-year-old since the start of his NBA career. Millsap is unlikely to be back in Denver after the team signed Jeff Green this summer.

Both the Warriors and the Nets may be in the market for a veteran addition to their frontcourt. Millsap is highly regarded as a jack-of-all-trades anchor player and could be the most cost-effective free agent remaining for them.

The Denver Nuggets fear that Paul Millsap suffered a broken toe during Friday’s loss at Charlotte.

Millsap left the game after landing hard on the court:

One of Millsap’s teammates, Monte Morris, said that Millsap has a broken toe. Shams Charania later reported that the Nuggets fear Millsap broke his toe.

Millsap had 16 points in 19 minutes before exiting. The 33-year-old is in his second season with the Nuggets and averaging 13.5 points and 7.1 rebounds in 27.1 minutes per game. He missed a big chunk of last season with a broken wrist.

Nuggets coach hopes to have Paul Millsap back in March The Denver Nuggets could be about a month away from getting a nice lift as they jostle for Western Conference playoff position.

On Wednesday, coach Michael Malone said that the hope is that big man Paul Millsap will return to the Denver lineup in about a month.

Nuggets coach Michael Malone says he hopes to have Paul Millsap back in early-mid March.

Millsap has only played in 16 games this season due to wrist surgery. He was his usual effective self in those games, averaging 15.3 points and 6.2 rebounds per game.

The Nuggets are currently the sixth seed in the Western Conference, though they’re only one game ahead of the ninth-seeded Los Angeles Clippers, meaning their playoff positioning is far from secure. The return of Millsap, coupled with the growth of guards such as Gary Harris and Jamal Murray, could see Denver move up in the standings, not down.

Paul Millsap reportedly out 2-3 months due to wrist surgery

Paul Millsap is expected to undergo wrist surgery, which will cause him to miss 2-3 months.

Millsap injured his wrist during Denver’s loss to the Los Angeles Lakers on Sunday night. X-rays were negative, but The Vertical’s Shams Charania says further testing showed the need for surgery.

Millsap was signed by Denver over the summer to a 3-year, $90 million deal. Securing Millsap was a big deal for the Nuggets, who were able to pair Millsap with Nikola Jokic.

There is good news and bad news for Denver. The good news is the X-rays on Paul Millsap’s wrist were negative. The bad news is he will miss at least one game.

Millsap left Sunday night’s contest against the Los Angeles Lakers after injuring his wrist. He underwent X-rays which came up negative, according to ESPN’s Chris B. Haynes.

X-ray results of Paul Millsap’s wrist came back negative, league sources tell ESPN. Huge relief for Denver. There was fear of a fracture.

Millsap is still set to miss Monday’s game in Sacramento, the team announced.

The Nuggets lost to the Lakers and are 9-7 on the season.

Millsap has been solid as expected, posting 15.3 points, 6.2 rebounds and 3.1 assists per game while forming a strong frontcourt duo with Nikola Jokic. 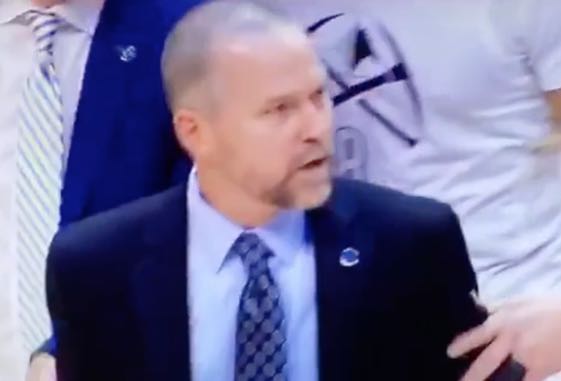