Jun 21, 2019; Vancouver, BC, Canada; Wayne Gretzky on stage as Philip Broberg is selected as the number eight overall pick to the Edmonton Oilers in the first round of the 2019 NHL Draft at Rogers Arena. Mandatory Credit: Anne-Marie Sorvin-USA TODAY Sports

Paulina Gretzky recently got married to Dustin Johnson after nearly a decade of being in a relationship together. Apparently her parents were big supporters of the wedding.

Gretzky answered fan questions over her Instagram Story on Sunday. She was asked by a fan how her father Wayne recated to meeting Johnson for the first time.

“He told me I should marry him …” Paulina responded.

That’s a pretty nice reception from her father.

Marrying into the Gretzky family can’t be easy. Imagine going to meet your girlfriend’s father, and it’s the greatest hockey player ever. There has to be some intimidation going on. But apparently Wayne liked Johnson.

There seemed to be a ton of family support for the relationship between Paulina and Dustin. You may recall that it was Paulina’s mom Janet who initially set up the couple.

Gretzky and Johnson got engaged in 2013, though they did not marry until this year. They have two sons together. 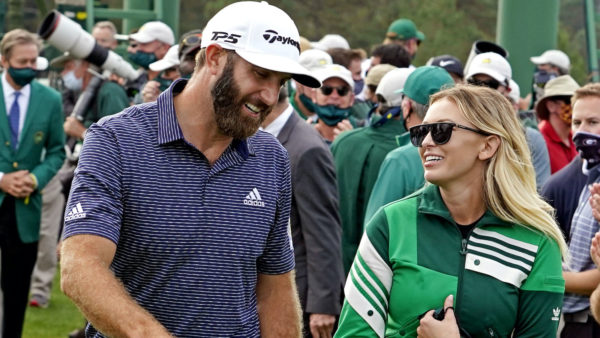 PGA superstar Dustin Johnson and Paulina Gretzky finally got married over the weekend after years of being engaged.

Gretzky, the daughter of NHL legend Wayne Gretzky, shared some photos on Monday from hers and Dustin’s wedding. The two got married at Blackberry Farm in Walland, Tenn., on Saturday.

Johnson and Gretzky had been engaged since 2013. They have two sons together — 6-year-old Tatum and 4-year-old River. The two met in 2009, started dating in 2013 and got engaged just months later. They had said they were not in a rush to tie the knot but finally did on Saturday.

Gretzky and Johnson went through a rocky period in their relationship a few years ago after some cheating rumors but clearly got past that.

Johnson has 24 wins on the PGA Tour, including two majors. His last victory came at the Masters back in 2020.

Paulina Gretzky and Dustin Johnson have been engaged since 2013, but the time to tie the knot has arrived. The daughter of NHL legend Wayne Gretzky and one of the world’s top golfers will finally get married later this year.

And with the date coming up quickly, the duo have begun sending out gift baskets to their guests. Luxury, high-profile gift baskets at that.

Gretzky’s friend, Kristina Melnichenko, and Dustin’s sister, Samantha, each shared photos of the gift baskets to their Instagram accounts this week. Inside, they found a $300 bottle Cristal champagne and a $400 set of Baccarat crystal champagne glasses.

Gretzky and Johnson have two sons together — Tatum, 6, and River, 4. They will both be on hand as their parents exchange their vows at Blackberry Farm in Tennessee.

Eight years after getting engaged, Dustin Johnson and Paulina Gretzky finally have a wedding date.

Gretzky recently sent her bridesmaids gift baskets that contained save the date cards. The cards revealed that the couple have a date set for the wedding, as well as a location. The two will be getting married at Blackberry Farm in Walland, Tennessee.

Blackberry Farm is a 5-star luxury hotel and resort. They even have a brewery on the property, which covers over 4,200 acres.

Johnson and Paulina met in 2009 but did not begin dating until 2013. They got engaged seven months after dating but have been engaged for years, saying they were not in a hurry to get married. They have two sons together.

Gretzky and Johnson went through a rocky period in their relationship a few years ago after some cheating rumors but appear to have gotten past that.

Paulina Gretzky says Dustin Johnson would not let her do Playboy

Paulina Gretzky has been offered a number of modeling gigs in recent years, and Playboy was one of them. Her boyfriend made her turn it down, however.

Gretzky, the daughter of NHL legend Wayne Gretzky, has been dating PGA superstar Dustin Johnson for years. In an appearance on the “Pillows and Beer” podcast with Craig Conover and Austen Kroll recently, Gretzky revealed that Playboy reached out to her in 2013 and asked her to do a shoot. She was excited about the idea, but she had just started dating Johnson at the time. He was strongly opposed to it.

“Playboy asked me to do, you know, Playboy and I was like, ‘Yes this is a great opportunity.’ It had to be right when we started dating in around 2013,” Gretzky called, as transcribed by Matt Chivers of GolfMagic.com. “They gave me an amount and a number and Dustin was like, ‘Absolutely not I’m going to match it, you’re not doing it.’ Even though money wasn’t the thing, I could tell it bothered him so it was fine.”

Gretzky and Johnson went on to have two children together, and they will soon be married. They’ve been engaged for several years now but have yet to announce a wedding date, though Paulina says they now have one.

Johnson and Gretzky had some rocky times a few years ago over cheating rumors, but that has not kept them apart. They seem to be doing as well as ever.

Dustin Johnson, Paulina Gretzky getting closer to a wedding date

Dustin Johnson and Paulina Gretzky have been engaged for more than seven years, but they have still not announced any official plans for a wedding. While no date has been set, it sounds like the couple is getting closer to tying the knot.

Adam Schupak of Golf Digest asked Johnson this week if he and Paulina have set a date to be married. The PGA star said “we do not have one yet,” but he said the decision is getting closer.

Gretzky recently shared some photos of herself dress shopping on social media, so wedding bells could be chiming in the near future.

Gretzky, the daughter of NHL legend Wayne Gretzky spoke about her longtime engagement to Johnson in a podcast appearance earlier this year. She said she and Johnson are “so in love” and explained why they have not gotten around to their wedding just yet.

Paulina was by Johnson’s side when he won the Masters last year. She even wore her own green jacket, which led to this great tweet going viral. Gretzky and Johnson share two sons together, who are 5 and 3. It would not be a surprise if the two are married at some point this year.

PGA superstar Dustin Johnson and his girlfriend Paulina Gretzky have been engaged for more than seven years now, but they still have not announced any plans for a wedding. Apparently, the two are still in no rush to tie the knot.

Gretzky spoke about her engagement to Johnson this week in an appearance on the “Netchicks” podcast, which is co-hosted by her sister-in-law Sara Gretzky. She confirmed that she and Dustin are not married but are “so in love” and are focused more on their two sons, who are 5 and 3.

“I don’t know if people know if me and Dustin are really married or not. We’re not. We’re so in love,” Gretzky said, as transcribed by William Pugh of The Sun. “I feel like everyone is like, ‘What is it? Is he not wanting to or she not wanting to?’ It’s so stupid.

“Being just with kids and being happy, I don’t want anything from Dustin other than I love him.”

Gretzky, who is the daughter of NHL legend Wayne Gretzky, was by Johnson’s side when he won the Masters back in November. She even wore her own green jacket, which led to this great tweet going viral.

Dustin and Paulina appeared to have some rocky times a few years ago as cheating rumors swirled, but that has not kept them apart. They simply aren’t in a rush to get married, and it’s fair to wonder if they ever will.

Colin Cowherd sent a tweet on Sunday about Dustin Johnson and Paulina Gretzky that went viral.

After Johnson won the Masters for his second career major, the FS1 host sent a tweet saying congratulations to Johnson “on everything.” Cowherd’s tweet included a photo of the golfer with his left hand on his fiancee’s backside.

Congrats… on everything, Dustin Johnson. pic.twitter.com/UpdLMuuUsl

Johnson won the Masters by five strokes at 20 under for the event. After he secured his second major, he was greeted by Paulina, who wore her own green jacket.

Johnson and Gretzky have been together since at least early 2013 and were engaged later that summer. They have two children together but have not gotten married. They had some rocky times a few years ago over cheating rumors, but that has not kept them apart.