New York Mets broadcaster Keith Hernandez made a quip about the Philadelphia Phillies’ defense last Tuesday, and the Phillie Phanatic on Friday was apparently still not over Hernandez’s comment.

During last Tuesday’s Mets broadcast, Hernandez said that he disliked working Phillies games because the team was not fundamentally-sound on defense.

Hernandez’s comments did not appear to be made with any ill-will. But the Phanatic made sure that Hernandez’s words did not go without a little payback during Friday’s game between the Phillies and Mets.

During the top of the third inning, the Phanatic crashed the Mets’ booth with Gary Cohen and Ron Darling. The beloved mascot brought a blow-up doll in a Mets jersey with a cut out of Hernandez’ face fastened to the front. The Phanatic also had a replica of a Gold Glove, 11 of which Hernandez won during his career.

The Phanatic brought both props on the NBC Sports Philadelphia broadcast as well.

Update: Keith has made his way over to T-Mac and Kruk. https://t.co/lJgPY3f9E2 pic.twitter.com/iNo2yrrDkS

NBC Sports Philadelphia took its own shot at Hernandez on Wednesday by including a graphic using a cartoon version of Hernandez each time the Phillies made an impressive play in the field.

And Pete Alonso has his 100th RBI of the season! pic.twitter.com/tlkNTmy7h1

Bohm’s error notwithstanding, the Philadelphia defense has been one of the best units in the majors this season. The Phillies have the fifth-best fielding percentage (.988) in MLB, and have committed the third-fewest errors (47). Fans are not allowed in MLB ballparks at the moment, but the Philadelphia Phillies mascot is not letting that get him down.

During Sunday’s game against the Miami Marlins, the Phillie Phanatic went to work trying to pump up all of the cardboard cutouts that were set up behind home plate at Citizens Bank Park. Marlins pitcher Robert Dugger had to have been annoyed.

Phanatic doing his best to get the fans phired up pic.twitter.com/TlEtdybdQi

The Phillie Phanatic looked more like a student section trying to distract a free throw shooter at a college basketball game, but you can’t blame him for making the best of a bizarre situation. Home-field advantage is going to be tough to come by this year.

The Phanatic is one of the most beloved mascots in baseball, and it didn’t take Bryce Harper long to show him some love after Harper signed with the Phillies last year. 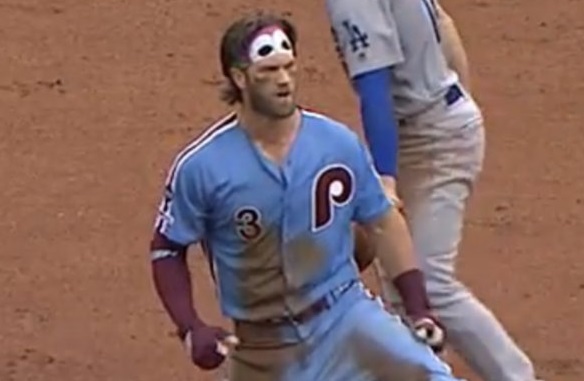 Bryce Harper continues to show his affection toward the Philadelphia Phillies’ iconic mascot.

During his first game with the Phillies, Harper wore cleats that had the Phillie Phanatic’s face on it.

A few months later, he was back at it.

During the Phillies’ game on Thursday against the Los Angeles Dodgers, Harper wore a bandanna that featured the Phanatic’s huge eyes on it. It looked funny seeing him with a second set of eyes:

Bryce Harper with his Phillie Phanatic bandanna ties up the game 5-5!

Harper went 2-for-3 with two runs scored and two RBIs. He had three multi-hit games and 7 RBIs in the four-game series against the Dodgers.

The Phillie Phanatic made a rare appearance at a Lehigh Valley IronPigs minor league game Wednesday night and got popped in the neck by a line drive. Check out the video:

The Phanatic ended up taking a trip to the hospital as we learned from Sportress of Blogitude, and he was released after being treated. USA Today reports that the man who wears the Phanatic costume, Tom Burgoyne, updated his health status on his Facebook profile:

“Hi Everyone – Thanks for all your posts, texts, emails. The Phanatic is fine. He took one off the neck last night it the Iron Pigs game. Since we’re soooo close, I felt his pain and have a nice golf ball-sized knot just above my eye. Bring on the A’s this weekend — the Phanatic will be ready!”

What should we call that, payback for the Phanatic messing with some fans who didn’t appreciate it? A taste of Karma? I bet you never realized how hazardous to one’s health being a mascot can be.

Video via The Fightins, thanks to Where’s Weems