The New York Knicks’ pursuit of Donovan Mitchell was ultimately unsuccessful, but they remain masters at comedic timing, if nothing else.

The Knicks’ summer-long pursuit of Mitchell officially ended in failure Thursday, as the Utah Jazz traded the guard to the Cleveland Cavaliers instead. That news broke on social media on Thursday afternoon, and it happened right as the Knicks made their own announcement.

Just as news of Donovan Mitchell’s trade to the Cavaliers hit pic.twitter.com/OONCdOxC2o

Did the Knicks know the Mitchell news was coming and time it accordingly? That’s pretty unlikely. They may have been aware they struck out in their efforts to land Mitchell, but it’s tough to believe they had the Barrett announcement queued up for the exact same time as the initial reports would come out.

This is probably just salt in the wound for Knicks fans, regardless of whether Mitchell winds up being worth the cost or not. In reality, the Barrett extension probably significantly reduced the likelihood that the Knicks could get something done for Mitchell, especially since Cleveland was able to dangle guard Collin Sexton in trade talks with Utah.

Whatever the case, it looks like another PR loss for the Knicks. This could work out well for them from a basketball perspective, but this is an awkward look for them at the moment. The New York Knicks and RJ Barrett on Monday agreed to a big contract extension that could have some significant consequences.

ESPN’s Adrian Wojnarowski shared the news about the Barrett contract. Barrett is getting a four-year, $120 million contract extension from the Knicks.

According to Woj, the Barrett deal could end the Knicks’ pursuit of a trade for Donovan Mitchell.

Woj says the Knicks had imposed a Monday night deadline to get a Mitchell trade done or they would commit to the Barrett extension.

New York’s Leon Rose set a Monday night deadline with Utah to reach an agreement on a trade for Mitchell – or the Knicks would commit to the Barrett extension, sources said. Knicks, Jazz closed gap on deal points in recent days on a Mitchell trade, but neither would go further.

The rookie extension could complicate a Mitchell trade due to the “poison pill” circumstance. If the Knicks were to include Barrett in a trade to Utah after agreeing to the rookie extension, and before the extension takes effect, the accounting would be tougher for the Jazz. For the Knicks, only Barrett’s lower 2022-2023 salary would count against them in trade salary matching. But for a team acquiring Barrett, the forward’s 2022-2023 salary plus the average value of his extension would count against them. The uneven values makes it more complicated to trade a player who has agreed to a rookie extension before said extension takes effect.

The New York Knicks appear to be taking a stance that would make you think Whoopi Goldberg was still their head coach.

Marc Berman of the New York Post reported this week that there is a belief around the NBA that Knicks coach Tom Thibodeau would prefer to give up swingman RJ Barrett over guard Quentin Grimes in a potential trade.

Grimes, 22, was selected by the Knicks with the No. 25 overall pick in the 2021 NBA Draft. He looked promising as a rookie, shooting 38.1 percent from deep with plus defense. But the full picture is still incomplete since Grimes saw just 17.1 minutes per game over 46 total appearances.

At face value, the notion that the Knicks would be willing to part with Barrett over Grimes is a major shocker. Barrett, who is actually a month younger than Grimes, is arguably the best player currently on the Knicks roster. Entering his fourth NBA season, Barrett is already a 20-point-per-game scorer who stuffs the stat sheet in virtually every category and also helps anchor the Knicks defensively as a large, disruptive wing. About the only argument there is for Grimes over Barrett is the money factor (as the latter is already eligible for a lucrative extension while the former still has three years left on his rookie deal).

It is worth noting that, unlike his previous stop in Minnesota, Thibodeau does not have a final say over basketball operations. Instead, he collaborates with the Knicks’ other key decision-makers such as president Leon Rose and GM Scott Perry. But there have also been other indications that the team values Grimes extremely highly.

Knicks’ pursuit of Donovan Mitchell trade could have major roadblock?

The New York Knicks’ chances of landing Donovan Mitchell may be starting to fade like Marty McFly’s family photo.

In an episode this week of his “Please Don’t Aggregate This” podcast, Bleacher Report’s Jake Fischer revealed that the Utah Jazz are not interested in Knicks star RJ Barrett as part of a Mitchell trade.

“I’ve heard pretty consistently the Jazz don’t really have much interest in trading for RJ Barrett and paying for him,” said Fischer, per HoopsHype.

That could be a major problem for the Knicks if the Jazz do not want to take back Barrett. The 22-year-old is New York’s highest-value young player and averaged 20 points per game last year with suffocating defense. But Utah’s stance makes sense since Barrett is eligible for a hefty rookie extension, one the Jazz, who are in payroll disintegration mode, may not want to give him.

We recently heard the Knicks were getting frustrated with Utah for trying to bleed them dry in Mitchell trade talks. If the Jazz are not interested in a key piece the Knicks have to offer, that could further complicate the situation.

RJ Barrett is considered one of the New York Knicks’ most valuable trade assets in their pursuit of a superstar player, but they are reportedly confident they can keep the young guard in one potential blockbuster deal.

Sources told Bleacher Report’s Jake Fischer that Knicks personnel are confident they could land Donovan Mitchell in a trade with the Utah Jazz without giving up Barrett. Part of the reason for that is that Barrett is openly seeking a max contract extension, and the Jazz may not want to give him one.

The Knicks are loaded with first-round draft picks and can offer up to eight of them in a trade. Utah will also want some talented players in return, and Barrett certainly falls under that category. The former No. 3 overall pick has improved in each of his first three NBA seasons. He averaged 20.0 points, 5.8 rebounds and 3.0 assists across 70 games last season.

New York has been viewed as the most likely landing spot for Mitchell. If the Jazz do not insist on Barrett being part of the deal, that could increase the chances of a trade coming together.

Knicks reluctant to include key player in Donovan Mitchell trade?

The New York Knicks have been frequently linked to a potential Donovan Mitchell trade, but the organization may not be willing to give up the necessary pieces to realistically achieve a deal.

Knicks sources have recently said the team would not be willing to trade RJ Barrett in any deal, according to Ian Begley of SNY. While it is possible Mitchell’s potential availability could change that stance, Begley is skeptical that it would.

If Barrett is off the table, it becomes difficult to see how the two teams match up in a trade. While the Knicks can trade up to eight future first-round selections in a Mitchell deal, they probably would not want to trade all eight, and some players might be a necessity. Earlier reports suggested that Barrett would probably be a must in any Knicks effort to trade for Mitchell.

The Knicks have been frequently linked to Mitchell, and their interest appears real. Whether they can consummate a deal probably depends on how desperately they want the Utah Jazz guard, because the price will be steep. 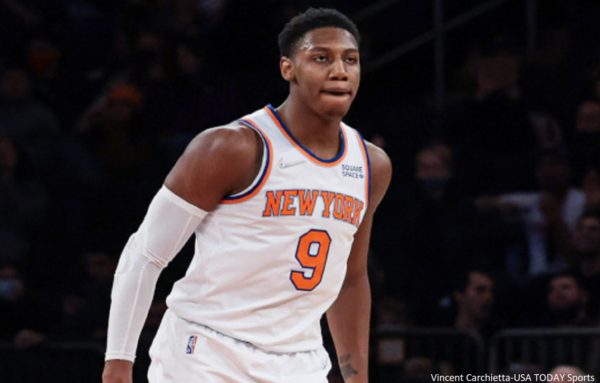 RJ Barrett has been blowing up for the New York Knicks lately, and fans will love his most recent comment.

The New York Knicks beat the Los Angeles Clippers 110-102 on Sunday. Barrett led his team with 28 points and 14 rebounds.

Despite his recent success, Barrett is not celebrating or getting ahead of himself. The third-year guard says he is still “hungry” and not getting carried away with anything he has accomplished.

RJ Barrett on if he feels like he can carry the Knicks at a high level: "I don’t feel like I’ve done anything so far…I’m hungry."

That sounds like a player who is focused and has the right attitude. That type of mentality is what can result in a player continuing to get better. Knicks fans have to love that.

The Knicks are a game under .500 but right there with a group of teams competing for the No. 8 spot in the East.