Pau Gasol shoots down report that he requested trade from Spurs 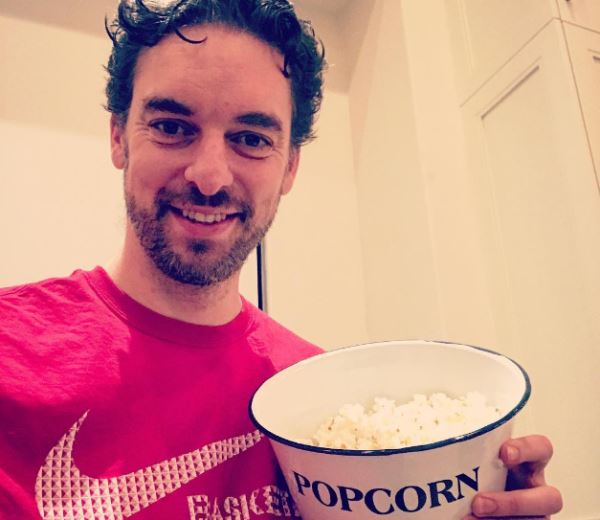 Pau Gasol remained with the San Antonio Spurs through the NBA trade deadline last week, and the veteran big man insists any talk of that not being the preferred outcome for him is inaccurate.

A recent report from ESPN Deportes claimed Gasol asked the Spurs to trade him, but the team could not work out a deal. Gasol ripped that report while speaking with the media on Tuesday.

“What’s the source? What’s the validity of that story? I don’t know,” Gasol said, per ESPN’s Michael C. Wright. “I didn’t request to be traded. I don’t want to comment on it because it is what it is.”

However, Gasol did hint that he has been unhappy with his role in San Antonio this season.

“I think people understand or can figure out my situation on the team is not what was expected from me, and my only wish and desire is to be able to contribute to the team, and be able to be on the floor and do what I’m supposed to do, and do what I signed here to do, and kind of live up to what I’m paid for,” he said. “That’s all. I’m waiting and hoping that that will happen. I’m staying positive. But don’t believe everything that is out there.”

Gasol admitted that people probably believed the report because it “makes sense,” so perhaps it was understood that the two sides would explore options to part ways. That doesn’t mean Gasol went to management and asked for a trade, but it sure sounds like he would not have been opposed to one.

Now in his 18th NBA season, Gasol’s numbers have fallen off a cliff. He has posted career lows basically across the board and is averaging just 4.4 points in 12.5 minutes per game. Although he’s 38, Gasol feels he can contribute more than the Spurs have allowed him to. Between the lack of production, a foot injury that resulted in him missing 26 games, and the bicycle accident he had over the summer, Gasol has faced some adversity in recent months.

A game between the San Antonio Spurs and Brooklyn Nets was delayed due to some flying creatures in the arena.

During Thursday’s game between the two teams, bats began flying around AT&T Center, which caused the game to be temporarily delayed until they could be brought under control.

Nets-Spurs has been stalled due to a BAT problem. Nets security isn’t trained for this one… pic.twitter.com/1MoNmyOwIb

While the bats flew around, fans chanted for Manu Ginobili, who once famously swatted a bat out of mid air during a game.

If only Ginobili hadn’t retired.

Kristaps Porzingis reportedly met with the New York Knicks on Thursday and left them with the impression that he wants to be traded, and there will be no shortage of teams interested in the former first-round pick.

ESPN’s Adrian Wojnarowski lists at least five teams that are expected to reach out to the Knicks about Porzingis prior to next Thursday’s trade deadline.

Wojnarowski’s colleague Zach Lowe added that the Spurs should be watched closely.

The Spurs are 30-22 and currently the No. 6 seed in the Western Conference. DeMar DeRozan has looked like a great fit with the team, and Gregg Popovich has no reason to feel that San Antonio can’t contend now that Kawhi Leonard is gone.

Porzingis has not played this season as he recovers from a torn ACL, but teams are apparently not concerned about him coming back full strength. The 23-year-old was averaging 22.7 points per game last year before he went down with the knee injury roughly halfway through the season.

The Clippers are 28-23 and have been a surprise in the West this year. They are reportedly planning to go all-out to land at least one star player this offseason, and acquiring Porzingis might help them accomplish that goal. The Heat, Raptors and Nets are also all currently in the playoff hunt, so it makes sense that they are looking to improve at the deadline.

DeMar DeRozan is the star of the show in San Antonio now that the Spurs have traded Kawhi Leonard, and he embraced the role by scoring a game-high 28 points in his team’s season opening win over the Minnesota Timberwolves on Wednesday. And now, there’s not a DeRozan jersey to be found.

How quickly did DeRozan’s new jerseys sell out in San Antonio? Let’s just say even he couldn’t get one for his own mother.

DeMar DeRozan discovered the downside of SA fans embracing him so quickly. “I tried to buy my mom a jersey last week and they were sold out. She didn’t believe me.”

We’re guessing the Spurs can make some sort of special arrangements for DeMar’s mom, but that gives you an idea of how loyal fans are in San Antonio. Rather than jumping ship with guys like Leonard, Tony Parker and Manu Ginobili gone, they’re throwing their support behind their new leader.

Some remarks Spurs coach Gregg Popovich made before the season indicate he already has a great relationship with DeRozan. If DeMar keeps playing the way he did in the opener, the fans will be just as fond of him.

San Antonio Spurs point guard Dejounte Murray made big strides in his second NBA season last year and was expected to take on an even bigger role going forward, but those plans will have to wait after the 22-year-old suffered a serious knee injury.

Murray left Sunday’s preseason game against the Houston Rockets, and the Spurs announced on Monday that an MRI revealed he tore his ACL.

Spurs guard Dejounte Murray underwent an MRI examination this morning in San Antonio that revealed he has a torn right anterior cruciate ligament.

The timeline for Murray’s return is uncertain, but he likely won’t be able to play at all during the 2018-2019 season.

Murray was the Spurs’ starting point guard for the majority of last season, averaging 8.1 points and 21.5 minutes per game. His emergence is one of the reasons Tony Parker fell down the depth chart and decided to leave San Antonio, and we had Murray listed as one of our 10 breakout players to watch heading into next season. With the Spurs getting younger and DeMar DeRozan now in the mix, the injury to Murray could not be more disappointing. The San Antonio Spurs lost another key franchise cornerstone this offseason when Manu Ginobili announced his retirement, but they are hoping the four-time NBA champion is still very much a part of the team going forward.

On Monday, Gregg Popovich revealed that Ginobili joined him and the Spurs’ other coaches on the team’s coaching retreat last week. While no official announcement has been made in regard to Ginobili joining the staff, ESPN’s Adrian Wojnarowski says Pop and the organization are “eager to accommodate him.”

If @manuginobili decides that coaching interests him, he will find an organization eager to accommodate him in San Antonio. https://t.co/r6mGCsIZPX

After he announced his retirement over the summer, Ginobili made it clear he has no intention of severing ties with the Spurs or the San Antonio area.

“My kids have already started school, and while I’m in town, I’ll be close to the team and the franchise,” he said, via ESPN’s Michael C. Wright. “I can’t help anymore by taking a charge or with a steal, but I’ll try to contribute somehow. I appreciate all my teammates, the staff and all the people in the team. I want the best for the Spurs. If I can help, I will do it with pleasure.”

Ginobili may not be ready to commit to a full-time coaching position, but it would be a surprise if he does not help the Spurs in some capacity. Heck, one of his own sons has already given him a great reason to stay around the team, so it’s a good bet that the relationship will continue.

Rudy Gay not concerned about predictions Spurs will miss playoffs The San Antonio Spurs have not missed the playoffs in more than 20 years, but there are many questions surrounding the team this offseason after Kawhi Leonard was traded. As far as Rudy Gay is concerned, those questions will be answered emphatically.

The Westgate SuperBook in Las Vegas recently listed the Spurs’ win total for next season at 43.5. San Antonio won 47 games last year, and Gay wants to remind everyone that the Spurs hit that mark despite Leonard missing basically the entire season.

“Why were we expected to be so much better last year? Because Kawhi may have come back?” Gay said this week, according to NBA.com. “He didn’t, and we were still a playoff team, really a couple of wins away from being a third or fourth seed in the West.”

Gay, who appeared in 57 games in his first season in San Antonio last year, noted that the Spurs always seem to exceed expectations under Popovich. If they fail to win more than 43 games, that would likely mean missing the playoffs for the first time since Popovich’s first season with the team in 1996.

The addition of DeMar DeRozan should give the Spurs a boost, especially when you consider that Leonard was basically a non-factor last season. Gay praised DeRozan for having a “chip on his shoulder” like the rest of the team, and that’s almost certainly how Popovich wants it.

No one is predicting that the Spurs will contend for a championship in the Western Conference, but the 43.5 win total is probably a bit low.