The San Francisco Giants are making a financial commitment to their minor league players.

The Giants committed to paying their minor league players through the end of the minor-league season, Robert Murray reported Wednesday.

The San Francisco Giants just informed minor leaguers that they will be paid through the end of the minor-league season, per sources with direct knowledge.

The minor-league season is not going to be played, which marks a significant lost opportunity for player development. Some teams have even planned to cut pay for their minor league players until changing their minds.

MLB originally announced in March that minor leaguers would be paid $400 a week through May 31 since they would not be able to play due to the coronavirus shutdown. The Giants will continue to pay their organizational minor league players through Sept. 7. They have about 270 players in the United States and Dominican Republic who will continue to be paid, costing the organization an estimated $1 million.

San Francisco Giants fans used to hate Yasiel Puig while he played for the Los Angeles Dodgers, but it sounds like there’s at least a chance the outfielder could be playing for his former rivals in 2020.

According to baseball writer Robert Murray, the Giants have interest in Puig, who remains a free agent with spring training looming.

Sources: #SFGiants have interest in free-agent outfielder Yasiel Puig. Familiarity with Farhan Zaidi from their together time in LA.

We haven’t heard much about Puig in a while. He’s still in search of a job a year after hitting .267 with 24 home runs with the Reds and Indians. He and the Giants have not gotten along over the years, but with Madison Bumgarner departing the team, he may receive a warmer welcome if both sides make this happen.

The Giants brought back Hunter Pence on Friday. It’s not clear if this will dissuade the team from making any pursuit of Puig, but the Cuban outfielder’s free agency is still worth following either way.

The San Francisco Giants are making what many fans will think is a long-overdue step to recognize one of the franchise’s finest hitters.

During a reunion of the 1989 NL Champion Giants, the team announced Sunday that they would retire Will Clark’s No. 22 in a ceremony in 2020.

The Giants announce they are retiring Will Clark's No.22.

Will the Thrill was the star attraction on the Giants teams of the late 1980s and early 1990s. In eight years with the organization, he hit .299 with power, making five All-Star appearances and finishing in the top five of NL MVP voting on four different occasions. He was also a Gold Glove winner at first base in 1991.

One has to wonder if it will be the only Giants’ jersey retirement in the near term, with a beloved figure currently finishing out his last year with the organization.

The San Francisco Giants are taking the Madison Bumgarner sweepstakes down to the wire.

According to Jayson Stark of MLB Network, teams in contact with the Giants say they are still talking about big trades, and are listening on Bumgarner with roughly an hour and a half to go until the trade deadline.

Teams in touch with the #SFGiants say they're not done. Still listening on Bumgarner & others. https://t.co/PfXKmDxSdZ

To say that the Giants have sent mixed signals on Bumgarner would be an understatement. They’re in a tough spot, sitting just 2.5 games out of the second wild card in the NL, and Bumgarner is set to become a free agent at the end of the season. They seem inclined to keep him for one last run, but have discussed Bumgarner deals with contenders. The odds seem to favor him staying, but it’s anyone’s guess at this point.

The San Francisco Giants entered Tuesday just 2.5 games back in the NL wild card hunt following their surge in the month of July, but they are still entertaining the idea of trading away their best pitcher.

Tim Brown of Yahoo Sports reports that the Giants are discussing a potential Madison Bumgarner trade with the Houston Astros.

The Astros already have one of the best rotations in baseball, and adding Bumgarner would position them incredibly well to make a World Series run. The left-hander has a no-trade clause in his contract that includes the Astros, so he would have to approve a deal if the two teams agreed to one.

Bumgarner has made it clear he does not want to be traded, so his no-trade list could actually complicate things if the Giants decide to move him. It would also be a tough sell for the fans with the team still in the playoff hunt, but Bumgarner is scheduled to become a free agent after the season. If the Giants don’t think they have enough to win a title this year, this may be their best chance to get maximum value in return for the former World Series MVP.

Madison Bumgarner has been arguably the biggest name to watch leading up to the MLB trade deadline, but the way the San Francisco Giants have come alive recently has most people thinking the left-hander is no longer for sale.

The Giants have won 16 of their last 19 games and now have a very real shot at making the playoffs. One rival executive told Jon Heyman of Fancred that there is “no way” they will trade Bumgarner amid their impressive streak.

Few see MadBum going anywhere now. Things can change in a hurry but this is typical from rival exec: “No way Giants can sell, they’re on fire.”

With their comeback win over the Chicago Cubs on Monday night, the Giants improved to 51-50 and are above .500 for the first time all season. While they have almost no chance of catching the Los Angeles Dodgers in the NL West, they’re suddenly just two games out in the wild card race. Trading their best pitcher at a time like this would be a bad message to send to the fans and players in the clubhouse.

Even if the Giants did want to trade Bumgarner, it sounds like he is going to do everything he can to prevent that from happening. The 2014 World Series MVP is 5-7 on the season with a 3.65 ERA, and he has allowed just five total earned runs in his last six starts. 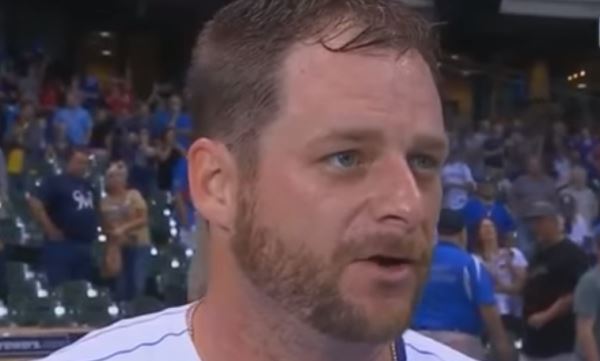