FOX gets crushed for funny graphical error during ALDS 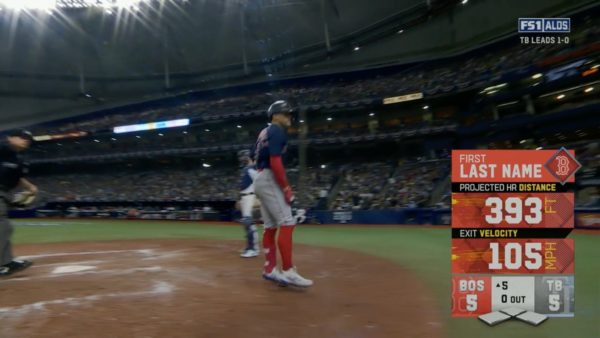 Twitter had a field day after a FOX Sports graphical error went viral during Game 2 of the ALDS on Friday.

Like most baseball broadcasts these days, FOX displays the projected distance and exit velocity when a player rounds the bases after hitting a home run. It was no different when Boston’s Kiké Hernandez hit a game-tying shot in the top of the fifth.

There was just one problem: instead of filling in Hernandez’s name, FOX accidentally popped the numbers up with some placeholder text.

First Last Name ties up Game 2 for the Red Sox with a home run! pic.twitter.com/1DgtqW8Dfd

Naturally, most viewers noticed such a glaringly obvious graphical error, and there were jokes.

this is great, First Last Name was my postseason MVP pick pic.twitter.com/9wm8MUIw8y

To be fair, good ol' "First Last Name" is about how well I know most of the Red Sox since they traded away Mookie pic.twitter.com/KQvlRQ6q1R

FOX did introduce a new scorebug for the playoffs, but this is just an accident that has nothing to do with the display. This will happen from time to time. On the bright side, it’s nowhere near as bad as this screwed-up graphic, so it absolutely could be worse. 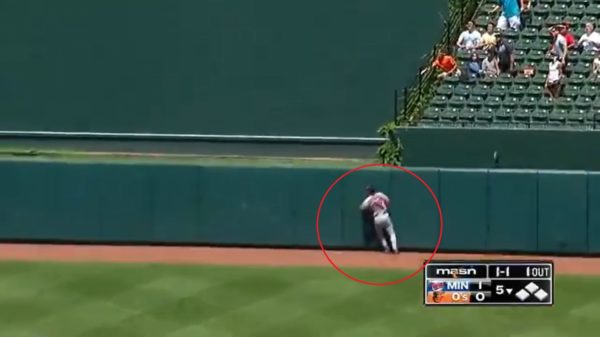 Playing center field in the major leagues is hard. If you need evidence of that, just check out Minnesota Twins emergency center fielder Rob Refsnyder.

Refsnyder, an infielder by trade, has been playing center for the Twins in place of the injured Byron Buxton. Refsnyder came into Monday hitting .348, so the Twins were willing to make some defensive sacrifices to keep his hot bat in the lineup.

With that in mind, Refsnyder isn’t really familiar with the ins and outs of playing center, especially in visiting ballparks. That explains why he completely ate it tracking this home run ball off the bat of Orioles first baseman Ryan Mountcastle at Camden Yards in Baltimore.

Refsnyder appeared fine and stayed in the game, so it’s okay to chuckle a little. That said, this is what the warning track is for. It’s also why you often see outfielders keep an arm out as they’re chasing a fly ball so they can know how close they are to the wall before they run into it like this. Refsnyder is totally new to the position, as Monday marked just his 14th MLB appearance in center, with all of them coming in 2021. These things don’t come quite as naturally to him as they probably should.

Plenty of natural outfielders have crashed into walls and come away from it worse than Refsnyder did. Plus, it’s not as if the play cost Minnesota a run or anything — or at least not one that wouldn’t have scored otherwise. Hopefully he can have a sense of humor about it. Rich Eisen got the excellent assignment of calling Saturday’s game between the Houston Texans and Tampa Bay Buccaneers on NFL Network. Unfortunately, the matchup of quarterbacks presented a bit of a problem for him.

Eisen kept mixing up the names of Jameis Winston and Deshaun Watson, repeatedly calling Winston “Watson” and Watson “Winston.” He did it at least six times in the first half. Take a listen:

After mixing them up for at least the sixth time, Eisen poked fun at himself, joking that if someone were playing a drinking game surrounding his screw-ups, they would be pretty wasted.

Eisen said on Twitter that his wife texted him to suggest the idea of the drinking game.

My wife Suzy came up with the idea, texting me during a commercial break. #BetterHalf https://t.co/NkAorl0nVp

That’s what makes Eisen enjoyable. Even when he’s making mistakes, he at least finds a way to make it humorous and get in on the joke.

But Winston/Watson? They’re so different, that seems hard to screw up. Maybe Eisen just had a mental block about it. He also has plenty of company when it comes to funny broadcasting mistakes. Auburn defensive tackle Derrick Brown, officially listed at 318 pounds, was well on his way to six points against the Florida Gators, having scooped up a Kyle Trask fumble deep in his own territory. With nothing but green ahead of him, though, Brown tripped over his own feet at the Florida 35-yard line, denying himself an epic touchdown.

RUMBLE (for as long as you can) BIG FELLA! pic.twitter.com/xUhcbiLWPE

Oh, it’s a tragedy. That would have gone down as one of the great big guy touchdowns of all time. To make matters worse, the trip cost the Tigers dearly, as they threw a drive-killing interception two plays later.

It’s better than losing a touchdown this way, as it wasn’t really the result of negligence of arrogance. Due to the rarity of what could have been, though, it may hurt even more. Goaltender Robin Lehner was awarded the Bill Masterton Memorial Trophy at the end of the 2018-19 season, honoring him for perseverance and sportsmanship after he battled back from alcoholism and bipolar disorder to backstop the team to the playoffs. However, there was one little problem with the trophy.

You had one job… pic.twitter.com/fmzYQWKuFf

One would assume the NHL will supply him with a new nameplate. It’s the least they can do, especially after Lehner formed such a quality bond with Islanders fans over the course of the season. Jimmy Butler officially left the Philadelphia 76ers for the Miami Heat on Saturday, and the Sixers sent him packing with a rather hilarious flub.

As has become customary for departing superstars, the Sixers’ official Twitter account posted an image wishing Butler farewell in his new home. There was only one problem: they messed up his last name.

Amazingly, the tweet stayed up for roughly a half hour amid a lot of derision before the team finally deleted it.

First the Sixers wouldn’t give Butler a max deal, now this. In seriousness, it’s a simple mistake to make, and typos happen to everyone. This was just a bad time for one to happen, and one would think that someone would have spotted it before it went up for everyone else to spot instead.