The conference’s plan very much uncertain at the moment. However, veteran Pac-12 reporter Jon Wilner believes the conference will do all it can to replace UCLA and USC, with San Diego State and SMU named as favorites.

San Diego State and SMU are the clear favorites.

The drop off from UCLA and USC to San Diego State and SMU is significant, but it would boost the Pac-12’s ability to negotiate media rights. It would still be a difficult sell, but would provide additional bargaining chips as opposed to being limited with 10 or 11 teams.

There are some who even believe the Pac-12 should add four total schools. In addition to San Diego State and SMU, Boise State and UNLV have also been pegged as potential targets.

The good news for the Pac-12 is that no more exits are expected. Now the focus turns to landing a new media rights deal, and clarity on that could come over the next month. The University of California Board of Regents will make a final determination on UCLA’s planned move on November 17, with the Pac-12 expected to present a media deal shortly thereafter. Friday night’s game between SMU and Navy experienced a delay in the third quarter after a horse pooped on the field. Seriously.

SMU scored on a 60-yard run by Tanner Mordecai to go up 19-14 early in the third quarter. After the touchdown, the SMU spirit squad ran on to the field to fire up the crowd. The display included running a black pony through the field.

The only problem is the pony left behind a trail of poop. There was a 10-minute delay in the third quarter so some SMU staff members could clean up the poop.

Here's the full horse poop delay from the Navy vs SMU game 💀 pic.twitter.com/IePhdIgeOQ

They had a pony out there thinking that would be easier to handle than an actual mustang, and look at what happens. Maybe next time they should get one of those poop bags behind the horse! One SMU fan brought a great sign to Saturday’s game against TCU.

The Mustangs took on the Horned Frogs in Sonny Dykes’ return to face his former team, which TCU won 42-34. There was some hostility towards Dykes from the home SMU crowd, as expected.

Sonny Dykes knew he'd hear it from Mustangs fans Saturday, returning to face SMU as coach of rival TCU. Dykes said earlier this week if he were an SMU fan, "I would boo me too."

In the end, Dykes survived and won. pic.twitter.com/SERM1Us4JY

But the killer sign came from an SMU fan, who wrote “We paid players before it was cool.”

The poster was hashtagged with “Pony Express,” which was the nickname for the backfield tandem of Eric Dickerson and Craig James on the 1982 SMU squad that went 11-0-1. SMU teams went 41-5-1 over four seasons from 1981-1984.

SMU was hit with the “death penalty” by the NCAA after they were found to have been paying players. SMU had been paying recruits to sign with them, and then many players were paid from a “slush fund” put together by boosters. Dickerson received a gold Trans Am to come to SMU.

Yup, SMU was paying players long before it was cool. TCU is stealing away SMU’s head coach, and the Mustangs have a replacement.

TCU is set to hire Sonny Dykes as their next head coach. Dykes is in his fourth season as SMU’s head coach and has the Mustangs 8-3 this season.

TCU’s interest in Dykes seemed evident from the moment they fired Gary Patterson. TCU parted ways with their longtime successful head coach because they believed Texas Tech wanted to hire Dykes. TCU also wanted Dykes, so they got rid of Patterson in order to compete with the Red Raiders for the coach’s services. We suspected that TCU had won the Dykes sweepstakes when Texas Tech hired somebody else.

Dykes picked a good time to leave as his stock was high following a 7-0 start. His Mustangs have lost 3 of 4 since then. They face Tulsa next.

This will be Dykes’ fourth head coaching stint. He began at Louisiana Tech, then coached Cal unsuccessfully, and he rebuilt his stock with a successful run at SMU. Now he’s off to TCU and the Big 12.

Sonny Dykes is widely expected to leave SMU, and the Mustangs are already said to have their eye on a replacement.

Dykes reportedly has an offer on the table from TCU that he is expected to accept. According to Pete Thamel of Yahoo Sports, Dykes’ former assistant Rhett Lashlee is the early favorite to be his replacement.

Sources: With SMU’s Sonny Dykes expected to leave for TCU, SMU’s potential search has come into focus. Former SMU OC and current Miami OC Rhett Lashlee is the early leading candidate for SMU and will be hard to beat for the job.

Lashlee was the offensive coordinator and quarterbacks coach at SMU in 2018 and 2019. He left last year to take the OC job under Manny Diaz at Miami.

Lashlee is obviously very familiar with SMU’s offense and has had success with it. The 38-year-old also coached under Gus Malzahn at both Auburn and Arkansas State. You can understand why SMU would want him back if they can’t keep Dykes.

Things got a bit heated between in-state rivals SMU and TCU on Saturday after SMU tried to plant its flag at midfield.

SMU improved to 4-0 with a 42-34 road win over TCU. To celebrate, the Mustangs tried to plant an SMU flag at midfield of Amon Carter Stadium. That did not go over well with the TCU players, and a scuffle ensued.

SMU WR Rashee Rice, the one fueled the rivalry with his comments this week, immediately takes the SMU flag to midfield after SMU’s 42-34 win over TCU. A small scuffle ensues. pic.twitter.com/kO0xxpktv9

Undeterred, SMU tried to plant the flag again, only to be denied again. This time, the flag was ripped off its pole, essentially ending any effort to leave it at midfield.

And then SMU CB Brandon Crossley takes the flag back to midfield and plants it on the TCU logo.

Some TCU players rush back to the logo, the flag breaks and it’s returned to SMU.

It’s worth noting that during the leadup to the game, Rashee Rice, who originally brought out the flag, accused TCU of being “scared to play us.”

It’s worth noting that SMU coach Sonny Dykes said he was unhappy with what happened and said he would speak to his team about it.

SMU head coach Sonny Dykes said his players shouldn't have planted the flag and he plans on talking to them about it. Also said "no one" has more respect for Gary Patterson and TCU than he.

It has to be said that SMU shouldn’t have expected any less. Planting the flag at the opponent’s midfield is disrespectful, and trying to do it while the opponent is still on the field is just asking for a confrontation. Even this much smaller school knew better than to make that mistake. Hail Mary plays are worth a shot at times, because they actually do work. SMU can attest to that.

The Mustangs beat Louisiana Tech 39-37 on Saturday on a last-second Hail Mary. SMU had a 2nd-and-10 with six seconds left. Quarterback Tanner Mordecai only had time to heave the ball to the end zone for one last shot. The ball was deflected and went straight to Roderick Roberson for the winning play.

What a way to win.

SMU went 10-3 under Sonny Dykes in 2019 and 7-3 last season. Now they’re off to another good start, though they had some nice fortune in this one. TCU’s season opener against SMU will not be played as scheduled on Sept. 12 due to positive COVID-19 tests.

TCU athletic director Jeremiah Donati said in a statement that some players and support staff had tested positive for the coronavirus. The game has been postponed, and the two schools will attempt to play it later in the season if an agreeable date can be found.

TCU-SMU next Friday has been postponed to TBD due to positive COVID-19 tests in the TCU program. pic.twitter.com/If5exLY2PD

This represents the first major college football postponement that wasn’t part of a full conference cancellation.

This game was added to the schedule late with both teams needing a Week 1 opponent. The schools have played this rivalry game for the last 13 years. They’ll be eager to find a new date to play if possible. 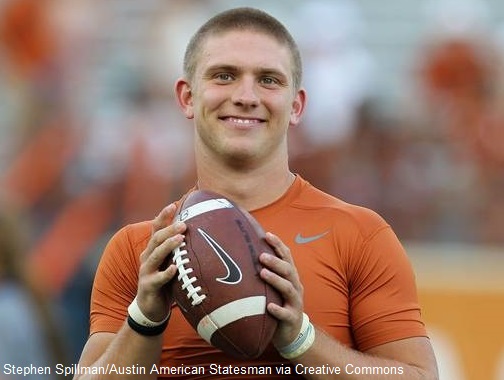 Texas quarterback Shane Buechele reportedly informed the Longhorns this week that he intends to transfer, and it is possible that he will not end up going very far.

ESPN’s Mark Schlabach reported on Thursday that SMU, which is located in Dallas, is one of the schools Buechele could end up transferring to. Mustangs all-time leading passer Ben Hicks announced earlier this week that he is transferring to Arkansas, so SMU has a scholarship open at the position. Buechele could also remain at Texas through the spring and graduate, which would mean he could play at his new school right away as a graduate transfer.

Buechele was a highly-rated prospect and became known for his trick throws when he started for Texas as a freshman in 2016, but some injuries during his sophomore season gave Sam Ehlinger an opportunity to start. Ehlinger had a great season in 2018 and led Texas to an upset win over Georgia in the Sugar Bowl, so the starting job will remain his heading into next year.

Buechele has one year of eligibility remaining. He has passed for 4,636 yards, 30 touchdowns and 16 interceptions during his college career.