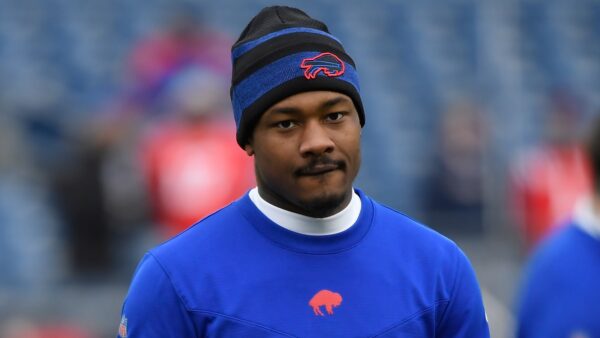 Buffalo Bills wide receiver Stefon Diggs was on the wrong side of Eli Apple’s Twitter boasting a week ago, but he got the last laugh on Monday.

Apple and the Cincinnati Bengals were eliminated in the AFC Championship game by the Kansas City Chiefs on Sunday, and plenty of people had their say after a week of Bengal trash-talking. Apple was a target, as many had filed away his response to Diggs after the Bengals’ 27-10 win over Buffalo in the Divisional round.

Diggs filed it away, too. On Monday, he issued his response to the Cincinnati cornerback, making it pretty clear that while he wasn’t going to overtly celebrate the Bengals’ demise, he had certainly taken notice of the response.

That’s why I mind my business. And just play the creases

Have a good day world 🫶🏾

In other words, Diggs is basically saying that what goes around comes around, and that is why he chooses to stick to his own business. That certainly seems to be a lesson the Bengals might want to learn from the last week.

Plenty of others went after Apple far more directly than Diggs did here. Diggs’ response, however, might be the most satisfying. 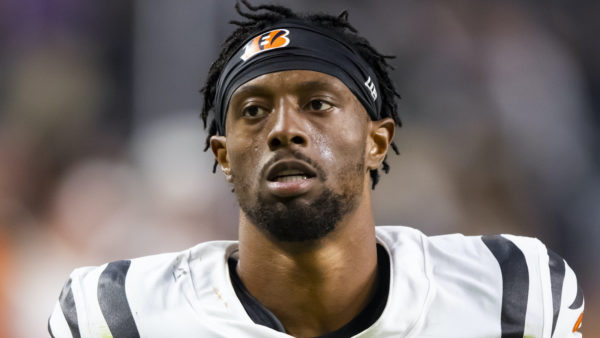 Eli Apple had an absolutely savage response for Stefon Diggs on Monday.

Diggs drew negative attention over the way he handled his Buffalo Bills’ 27-10 loss to the Cincinnati Bengals in their AFC Divisional Round playoff game on Sunday. Diggs tried to leave the stadium shortly after the game ended and had to be stopped by a teammate.

Diggs received support from his head coach, but the wide receiver still felt the need to tweet his side of things. He defended his behavior, saying on Monday that it was a reflection of how much he cares about winning.

Apple, whose Bengals defeated Diggs’ Bills, responded to one of the tweets with an insult.

“Cancun on 3” is a sports joke that is often used by people in the NBA when they want to ridicule a team whose season has ended. The joke is that a team is now breaking a huddle/meeting by saying “Cancun on 3” rather than “Raptors on 3” (for example) because their next stop is not to prepare for another game, but to go on vacation to Mexico.

That was a clever — and savage — way of saying “scoreboard” to Diggs, whose season is now over. Buffalo Bills wide receiver Stefon Diggs responded to his critics Monday after reports suggested he tried to leave Highmark Stadium early at the end of the team’s playoff loss.

Diggs defended himself in a series of three tweets, questioning whether his critics wanted him to be okay with losing and comfortable when the Bills play well short of their capabilities. He also took a shot at critics by pointing out that some seemed more upset with his reaction to the loss than to the loss itself.

Want me to be okay with losing ? Nah

Want me to be okay with our level of play when it’s not up to the standard ? Nah

It’s easy to criticize my reaction more than the result.

In other words, Diggs is standing by his actions. Some may wish he had handled his emotions differently, but nobody is going to be mad at him for being frustrated over a 17-point home loss in a playoff game.

While Diggs’ behavior has sparked a lot of conversation, the Bills do not seem terribly concerned. His issues do not seem to be with the organization, so there is little reason for them to worry as long as that is the case.

Stefon Diggs took the Buffalo Bills’ playoff loss very hard on Sunday, and one of his teammates revealed what the wide receiver was saying following the game.

Bills wide receiver Isaiah McKenzie revealed Monday that he spoke to Diggs following the Bills’ 27-10 playoff defeat to the Cincinnati Bengals. McKenzie said Diggs was asking him how the Bills had lost, and how the outcome was the same every year.

Diggs was asking him "How? Every year? It's the same thing."

McKenzie said its the same questions everyone is asking. And he will ask.#Bills

Diggs’ frustration was obvious after the game, when he actually tried to leave the stadium early. The star wide receiver clearly felt this was the Bills’ year, and could not comprehend how things went so badly, with the Bills badly outplayed by Cincinnati from start to finish.

Diggs was hardly the only Bills player who struggled with how the team’s season ended. The franchise has put together three great regular seasons, but only once have they appeared in the AFC Championship and they’ve never won it. One would imagine that the next step forward needs to come soon. Buffalo Bills coach Sean McDermott had a somewhat surprising response to Stefon Diggs’ behavior at the end of Sunday’s playoff loss to Cincinnati.

McDermott was asked about Diggs’ attempt to leave the stadium early at the end of Buffalo’s 27-10 defeat in the AFC Divisional Round Sunday. Interestingly, McDermott was fully defensive of his player, and used it as an example of how much Diggs cares about winning.

Sean McDermott defended #Bills WR Stefon Diggs after his sideline outburst and early exit from the stadium on Sunday: "That's what makes him good, is what you saw. … It hurts and I wouldn't want a guy that doesn't hurt." pic.twitter.com/2BjirB8nvd

Diggs also appeared to be angry with Josh Allen and was seen animatedly gesturing toward the quarterback on the sideline.

Like most of the Buffalo offense, Diggs was kept quiet Sunday, catching just four passes for 35 yards. Nobody can blame him for being frustrated, but coaches usually do not want players showing it the way Diggs did.

Stefon Diggs appeared to have words for Josh Allen The Buffalo Bills saw their season end on Sunday when they were dominated at home by the Cincinnati Bengals, and no one seemed more frustrated with the loss than Stefon Diggs.

Diggs caught just four passes in Buffalo’s 27-10 loss. Late in the fourth quarter, CBS showed a clip where it looked like the star wide receiver was lecturing Josh Allen and a member of the Bills’ coaching staff on the sideline.

Allen was watching film on a tablet and never looked up at Diggs, who threw his arms out to the side while saying something in the direction of the quarterback. You can see the video below:

Stefon Diggs exchanging some words with Josh Allen on the sideline pic.twitter.com/J2heSTBMrc

There was also a report that Diggs had to be stopped from leaving the stadium early, so his frustration was evident.

The Bills entered the season as the favorite to win the Super Bowl. Diggs is not the only one who was upset that their season ended the way it did, though he may have been the most animated about it.

Buffalo Bills wide receiver Stefon Diggs on Sunday was visibly upset toward the end of his team’s loss to the Cincinnati Bengals, and it sounds like he tried to get out of the stadium as quickly as he could.

According to Joe Buscaglia of The Athletic, Diggs gathered his belongings after Buffalo’s 27-10 loss in the Divisional Round and tried to leave before coaches even had a chance to address the team. Practice squad running back Duke Johnson reportedly stopped Diggs and brought him back to the locker room, but Diggs still left a few minutes later.

Bills WR Stefon Diggs darted out of the locker room with all his stuff before some of the Bills coaches were even down to the tunnel area. Practice squad RB Duke Johnson stopped Diggs before he left the stadium and brought him back to the locker room. He left a few minutes later.

The Bills were dominated by Cincinnati from the opening snap. Buffalo was unable to get anything going offensively, and Diggs caught just four passes for 35 yards. He appeared to voice some frustration to Josh Allen on the sideline late in the fourth quarter.

Stefon Diggs exchanging some words with Josh Allen on the sideline pic.twitter.com/J2heSTBMrc

Diggs is a highly competitive player who cares about winning. You would always rather have that than a player who is indifferent, but trying to leave the stadium before your teammates is a bad look. He wasn’t the only Bills player who was upset about losing such a big game.

We have seen instances in the past where Diggs has shown frustration on the sideline, but those turned out a lot better.

Stefon Diggs showed up to playoff game in wild outfit

Buffalo Bills wide receiver Stefon Diggs made quite the fashion statement before his team’s Divisional Round playoff game against the Cincinnati Bengals on Sunday.

Diggs showed up to Highmark Stadium in an outfit that really cannot be described. He had some sort of knit covering over his entire head and pants that looked like they would have been worn down the halls of a high school in 1998. Check it out:

The only other pregame outfit we can remember that came close was worn by Kyle Kuzma, and the NBA star was roasted for it.

Only the best receivers in football can get away with wearing stuff like that. The Buffalo Bills played a bizarre first half against the Miami Dolphins, but nearly capped it off with a tremendous play by wide receiver Stefon Diggs.

In the dying seconds of the first half of a 17-17 wild-card game, Diggs reached up and made a one-handed catch in the end zone. However, he did not quite have control before getting his feet down in bounds, at least according to the officials.

Diggs did not quite have possession when his right foot came down, which is why the Bills did not get a touchdown.

Diggs SO close to pulling in this one-handed TD catch to end first half 😩 pic.twitter.com/h6DZomSdGf

Interestingly, the play was not formally reviewed, much to the frustration of coach Sean McDermott. McDermott even used his final timeout to try to trigger a review, costing the team one more shot at the end zone before halftime in the process.

The Bills had jumped out to a 17-0 advantage in the first half, but Miami stormed back to tie it at 17 before a late field goal sent the Bills in with a 20-17 advantage. Stefon Diggs made sure he was there for his teammate on Monday night.

Video went viral of the Buffalo Bills receiver Diggs arriving at the University of Cincinnati Medical Center where Bills safety Damar Hamlin was taken to. ESPN’s Coley Harvey reported that Diggs initially had trouble being allowed in but a police officer eventually let in the receiver.

Stefon Diggs showed up to the Cincinnati hospital to check on damar Hamlin 💯🙏🏾❤️ pic.twitter.com/bbdKV5He1P

The Pro Bowler Diggs was not the only notable person who paid a visit to Hamlin. Cincinnati Bengals coach Zac Taylor was also seen at the hospital.

Moments ago, Bengals head coach Zac Taylor was at University of Cincinnati Medical Center. Saw him as he was leaving. Cincinnati Enquirer photog @AlbertCesare caught this image of Taylor pic.twitter.com/KGTxA4jPCJ

Hamlin collapsed on the field in the middle of Monday’s game between the Bills and Bengals. As a result, the remainder of the contest was postponed, and many Bills players flew home from Cincinnati.

The most recent update that we heard on Hamlin’s condition came from his friend and marketing representative.