Whether it was a matter of players going down with injuries, failing to produce, or teams blowing games, there were plenty of disappointments in Week 14 of the NFL. We saw the Browns do their usual thing, a fight between a player and fans in Jacksonville, and even league officials not protecting a player the way they should have.

Here’s a look at the 15 biggest disappointments from Week 14.

This was it. This was the chance. The Browns were at home and entered the fourth quarter with a 21-7 lead on the Green Bay Packers. Brett Hundley isn’t exactly an outstanding quarterback, and it seemed unlikely that he’d be able to drag the Packers back from two scores down. This is the Browns, though, and with the Browns all things are possible as long as they’re negative things. A game-tying touchdown with 17 seconds left was followed by a horrible DeShone Kizer overtime interception, and that was that. 0-16 seems more likely than ever.

Carr and the Raiders finally had a chance to make up for most of their tumultuous season. They had the Kansas City Chiefs head-to-head with the opportunity to move ahead of them in the standings — a scenario that seemed impossible even a month ago. The Chiefs’ defense hadn’t been performing well, which should have led to Carr feasting. He didn’t. He was picked off twice while throwing for 211 yards and one touchdown. They didn’t score in the game until garbage time, which was also where he ran up his yardage total. How bad was Carr? He fell on the sword for his performance in this one.

END_OF_DOCUMENT_TOKEN_TO_BE_REPLACED 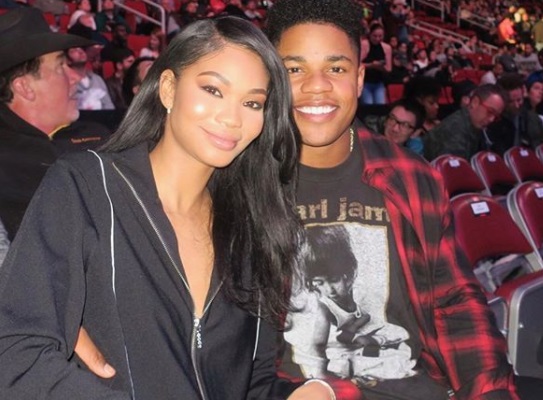 Sterling Shepard’s New York Giants have suffered a lot of losses this season, but the wide receiver scored a major win this weekend.

Shepard posted a photo on his Instagram account of him proposing to his girlfriend, SI Swimsuit model Chanel Iman, who said yes. In his caption, Shepard used an appropriate metaphor, calling Iman “The catch of my dreams.”

The catch of my dreams…can’t wait to spend the rest of my life with you!

Iman posted the same photo on Instagram and captioned it, “A night full of tears of happiness
I’m beyond excited to spend the rest of my life with you @sterl_shep3 you are my soulmate, my best friend, my everything! Can’t wait to be your Mrs.”

According to E!, Shepard proposed to Iman on her birthday Friday night, then surprised her by taking her to a spot where her friends and family were gathered.

Shepard, 24, was a second-round pick by the Giants out of Oklahoma last year. He has 1,185 yards and nine touchdowns in his career. The two have been dating since at least late last year. Don’t count Sterling Shepard out for Thursday night’s game against Washington just yet.

The New York Giants wide receiver has been dealing with migraines and was listed as questionable for the game. He missed practice on Tuesday, and he’s now a game-time decision.

FOX NFL reporter Jay Glazer says Shepard woke up feeling better on Thursday and has a slight chance of playing.

Shepard did not play against Kansas City but had 11 catches for 142 yards at San Francisco the week before.

It was a big day for star performers across the NFL, with several quarterbacks and wide receivers in particular putting up very big days. We also witnessed a rookie nailing a game-winning 61-yard field goal and a few big defensive performances, even in losing efforts.

Here’s a list of 15 standout performers in Week 3 of the NFL season.

In a contest where quarterback Matt Ryan threw three interceptions in one game for the first time in two years, it was the Atlanta running game that stepped up and drove the offense forward. The Falcons picked up 151 rushing yards as a team, with Devonta Freeman contributing 106 of them, plus a touchdown. Tevin Coleman was no slouch either, racking up 46 yards on just six carries, good for an average of 7.7 yards per carry. Their contributions opened up the passing game and allowed Ryan to get the job done despite his three picks.

OBJ is back, and so is the drama — but when he’s playing like this, the Giants will be happy to tolerate it. The Giants’ star receiver reeled in nine catches for 79 yards and two touchdowns, including an excellent one-handed grab in the back corner of the end zone for his second touchdown catch. He also had a rather controversial celebration on his first grab. He deservedly got flagged, but New York will deal with the consequences if he’s putting up stat lines like this one.

END_OF_DOCUMENT_TOKEN_TO_BE_REPLACED One of the reasons the New York Giants were blown out by the Green Bay Packers Sunday night was the poor play of their wide receivers, and you just knew the group’s decision to party on a boat in Miami last weekend was going to be a major storyline. Heck, even the NFL’s official research Twitter account could resist piling on.

Thanks to the NFL Research Media Group, the Giants players who were photographed on “The Boat” became their own statistical category.

Giants not on "the boat":
114 receiving yards, 1 TD on 8 targets@TreySongz

Players pictured on "The Boat": 43.9 passer rating when targeted by Eli Manning

This is the risk Odell Beckham Jr., Victor Cruz and Sterling Shepard took when they posed for this photo. Could it have been the sub-zero wind chills and not the partying that led to all of the dropped passes? Of course, but Troy Aikman made some great points with his thoughts about the decision. While grown men are free to do what they want when they’re not on the clock, you can understand the scrutiny.

The New York Giants beat Washington 19-10 on Sunday to run their record to 11-5, and then their wide receivers whisked down to Miami to party during their off day.

Video of Justin Bieber out in Miami, Florida this morning. (January 2) pic.twitter.com/ehs83DpvcP

They were even pictured on a boat too, wearing Timberland boots no less:

The players have Monday off before needing to be back for practice on Tuesday. The Giants visit the NFC North-winning Green Bay Packers on Sunday in the wild-card round of the playoffs.

Their partying ways are reminiscent of the Cowboys going down to Cabo on their bye week and then losing, which has Giants fans concerned.

Here’s another video which has some foul language:

#PressPlay: #TreySongz having fun with #OdellBeckhamJr and other #NYGiants teammates in Miami There can only be one group of “boyz” in the NFL, according to Ezekiel Elliott.

At least, that’s the reaction that New York Giants rookie receiver Sterling Shepard got over the caption he used on an Instagram post of his teammates. Elliott, the Dallas Cowboys star rookie running back, couldn’t help but respond to Sterling’s “Dem boyz” remark.

Just for argument’s sake, the Giants and Cowboys met on the season’s opening weekend in Dallas, and New York won 20-19, so perhaps they have a right to claim it. Of course, a lot has changed since then, but results are results. On the other hand, wouldn’t we all think of the Cowboys before the Giants when reading that caption? Come to think of it, do you think either of these guys really care beyond just having fun online? Or can we make Dec. 11’s matchup between the two teams a Battle for the Boyz title?