Tarik Cohen is trying to grieve following the death of his twin brother Tyrell, who died on Saturday at the age of 25.

Tyrell died over the weekend in North Carolina after being electrocuted. Officials believe he was fleeing from authorities following a car accident and tried climbing a fence at an electrical substation.

Cohen sought help on social media Saturday in locating his brother, whose body was found and identified on Sunday.

On Monday and Tuesday, the Chicago Bears running back sent tweets regarding his brother’s death. Tarik said he would take care of Tyrell’s two young daughters.

I lost my brother , my twin, myself . What a great man he was . I’m glad i got to express just how much i love him while he was here. God truly calls home the best and most worthy. I’ll just miss him forever. I got Riah and Trini Tyrell i swear to god .

From sandboxes to caskets. Lord knows i wanna go wit you . But I gotta hold it down for you . I love you forever.

The Cohen brothers are from Bunn, North Carolina. Tarik has played for the Bears since being drafted in 2017.

Tarik said Saturday that Tyrell was last seen at 2 a.m. and was possibly lost in the woods.

ABC 11’s Tim Pulliam reported that a body was found on Sunday at a Duke Energy substation in Wake County, North Carolina. The body was later identified as Tyrell’s.

BREAKING: Body found today off Lead Mine Road at a @DukeEnergy substation in Wake County. Sheriffs office says the man was electrocuted trying to climb equipment. It’s believed the man was trying to get away from law enforcement. No identity yet. #ABC11 pic.twitter.com/836COuJMcR

Tyrell was reported as missing by his girlfriend. Pulliam says authorities believe Tyrell was running away from a car accident when he climbed the substation and died from electrocution.

The Chicago Bears issued the following statement after learning of Tyrell’s death.

Tarik and Tyrell are fraternal twin brothers. Tarik has played for the Bears since being drafted by them in 2017.

Cohen asked those in the Raleigh/Durham area of North Carolina for their help in finding his brother, Tyrell. Cohen posted a description of his brother, his last whereabouts, and said his brother could be injured.

RALEIGH/DURHAM AREA Have you seen my brother ? Last seen 2 am at Heroes pub on six forks rd. Wearing a red shirt black pants and white shoes !! 5’6” 165
Could be on foot in the woulds around 540 and six forks . Possibly injured ! RT if you’re in the area please . pic.twitter.com/CqCbbZyDGx

Tyrell is a fraternal twin for Tarik but has the same height at 5-foot-6.

“He’s my purpose,” Cohen said of his half-brother, Danta Norman. “They’ve always been my purpose, my brothers and my mom, that’s my dominant family that I grew up seeing every day. But I feel like it adds a little more fuel to the fire now.”

Cohen played college ball at North Carolina A&T and has spent the past four seasons with the Bears. He is recovering from surgery to repair a torn ACL.

Russell Wilson has informed the Seattle Seahawks that he would accept a trade to four teams, and the Chicago Bears are one of them. You can understand why that excites Tarik Cohen.

Wilson’s agent told ESPN’s Adam Schefter on Thursday that the quarterback has not demanded a trade. Wilson did, however, give the Seahawks a short list of teams that he would be willing to play for, which is significant since he has a no-trade clause. Cohen immediately tweeted at Wilson in response to the news.

While he was on the subject, Cohen figured he would also check in on Houston Texans quarterback Deshaun Watson.

@deshaunwatson pull up gang , ion think nobody got number 4

Man I’m shooting my shot from here on out lmao

Wilson says he would be open to playing for the Bears, Dallas Cowboys, New Orleans Saints and Las Vegas Raiders. Though, his agent noted that the QB wants to remain in Seattle at this time.

Cohen is known for sending some pretty funny tweets. He had an extremely relatable comment after a Bears loss last season and also trolled a division rival over a missed kick. We’re not surprised he jumped all over the Wilson news.

Tarik Cohen was part of some trade rumors on Saturday and issued a response on Twitter.

Rumors surrounding a possible Carson Wentz trade have heated up. There have been suggestions that the Chicago Bears are interested in making a deal for the Philadelphia Eagles quarterback.

Rumors all over tonight on #Eagles trade of QB Carson Wentz. Here’s what I’m told. Wentz and a draft pick to #Bears for number 1 draft pick, QB Nick Foles, and RB Tarik Cohen who is coming off ACL injury but should be ready in September. @SportsRadioWIP

Cohen heard about the rumors and shot them down via Twitter.

Lemme clear this up real quick . Just got off the phone wit my HC and GM , bears fans we locked in don’t worry . people say anything nowadays man .

Regardless of what Cohen says or was told, he could still very easily be traded. And if the Bears think that acquiring Wentz and his contract will fix their issues, they’re going to be in some trouble.

Tarik Cohen sent a funny and extremely relatable tweet during his Chicago Bears’ 41-25 loss to the Green Bay Packers on Sunday night.

The Bears running back has been out since suffering a torn ACL in a September win over the Falcons. He thought he would be a jinx if he watched the game, so he tried not to watch, hoping that would produce a strong result. But that didn’t help as the Bears fell behind 27-3 and 41-10 before losing 41-25.

“Thought if i didn’t watch we would play way better . F–k,” Cohen tweeted.

You’ve never been a true sports fan if you haven’t had a lucky spot on the couch, worn a lucky piece of clothing, or thought you or a friend was a jinx when watching the game. Even Cohen is included in that group.

The 25-year-old had 115 total yards this season prior to his injury. He has 14 career touchdowns and has played his entire career with the 5-6 Bears, who have now lost five in a row.

The Chicago Bears may have lost a significant part of their offense for the remainder of the season.

Tarik Cohen had to be helped off the field after an Atlanta Falcons defender was pushed into him on an attempted fair catch. ESPN’s Adam Schefter reported that the Bears fear the worst, and that Cohen may have torn his ACL.

An ACL tear would end Cohen’s season. He hasn’t been a big factor for the Bears so far, but is an option out of the backfield in both the passing and running game, as well as on returns.

The 25-year-old Cohen tallied 669 yards from scrimmage last season. He signed a three-year extension worth over $17 million with the Bears last week. 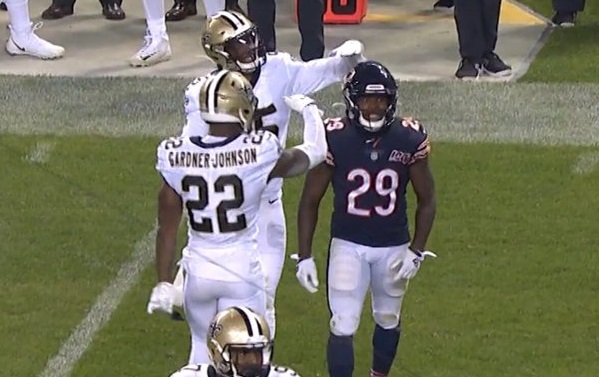 Tarik Cohen does not care for your jabs about his height.

Cohen caught a pass against the New Orleans Saints in the fourth quarter of his Chicago Bears’ 36-25 loss and then was mocked by a pair of Saints defenders. Both Eli Apple and CJ Gardner-Johnson held up their hands to represent Cohen’s short stature.

Barstool Sports tweeted to say how disrespectful of the Saints it was, and Cohen did not care for that. He called their tweet “stupid” and said people act like he doesn’t know he’s short.

Cohen is 5-foot-6 and plays in the NFL. He’s the shortest guy on the field when he’s out there. He’s been used to this, so he’s probably heard it all.

Cohen shouldn’t worry about his height; he has excellent company.