Deandre Ayton has a big plan for himself heading into his third season with the Phoenix Suns, and it appears he has spelled out that plan across his back.

Ayton shared a photo on Instagram this week that shows a massive new tattoo he got on his back. It reads “DOMINAYTON” in, let’s call it, very intimidating font.

Ayton is not the first NBA player we have seen with a massive back tattoo, and you can see another one of the more prominent ones here. The big man’s ink, however, is certainly unique.

Dwyane Wade roasted over quality of his new tattoo

Dwyane Wade went most of his life and NBA career ink-free, but he has since embraced tattoos and gotten quite a few. He is even being roasted for the quality of his most recent piece.

Wade shared a photo on his Instagram account Thursday of a new tattoo on his forearm. The tattoo portrays Martin Luther King Jr.’s “I Have a Dream” speech that was delivered in 1963.

Thank you @nessaurelia for capturing this moment for me. 57 years ago to the date Martin Luther King Jr stood before a quarter of a million people from the steps of the Lincoln Memorial and spoke the words "I have a dream”

The sentiment behind commemorating the famous speech is admirable, but Wade’s followers were not impressed by the quality of the tattoo.

D Wade has done a lot of crack head things over this past year but that tattoo takes the cake .

Somebody said D. Wade MLK tattoo look like James Brown. Please come pick me up off the flo pic.twitter.com/87E8xDTQz3

We need to jump whoever did Dwayne Wade's tattoo

For Wade’s sake, let’s hope the tattoo is a work in progress. Last year, the former Miami Heat star got a tattoo of his logo on his knee. That one at least looked better. New England Patriots kicker Justin Rohrwasser came under heavy scrutiny immediately after he was drafted by the team because of a tattoo he had on his forearm, and the rookie has now removed the ink.

Rohrwasser recently had the “III” symbol on his left forearm removed, according to TMZ. The symbol represented a groupe called the Three Percenters, which is a collection of who people support gun rights and have been categorized by some as a militia and anti-government, though they dispute those characterizations on their website.

Rohrwasser, who kicked for Marshall and was drafted by the Patriots in the fifth round, apologized for the tattoo and said he was ashamed of it. He said he got it when he was 18 and considered it a symbol of patriotism. 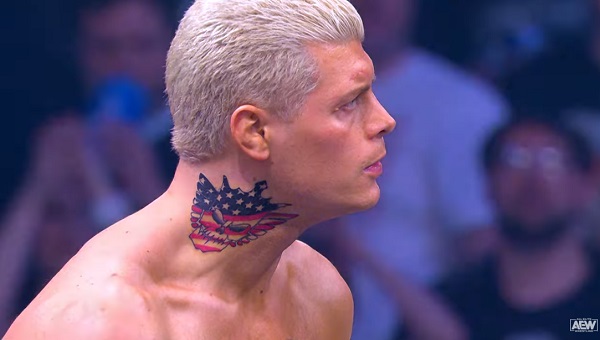 Cody Rhodes received attention over the weekend for the new neck tattoo that was impossible to miss when watching him on AEW Revolution on Saturday in Chicago.

Cody was seen with a tattoo right in the middle of his neck in red and blue colors.

No one:
Absolutely no one:
Cody Rhodes: What’s that? I should get a neck tattoo? pic.twitter.com/lQZa9D7zch

The tattoo is of his Nightmare Family logo, and he got it in a visible spot for a reason.

“It’s not something I want to cover up. That was the point of it. … I went against conventional wisdom here,” Rhodes said in an explanation on AEW Road to Denver.

“I think it represents individual identity. It meant a lot to have my mark on me.”

I’m humbled by the run I’ve been on and the love of the fans. Incredibly lucky man. It was very simple, I wear a lot of brands…I wanted to make sure mine was one of them. And I wasn’t hiding it. More details on tomorrow’s “Road To Denver”… – thank you @inkanddaggertattoo @craigbrocktattoo for taking the design and making it a reality!

“It was very simple, I wear a lot of brands…I wanted to make sure mine was one of them. And I wasn’t hiding it,” Rhodes said on Instagram.

In addition to wrestling for AEW, Rhodes, 34, is an executive vice president for the new promotion. 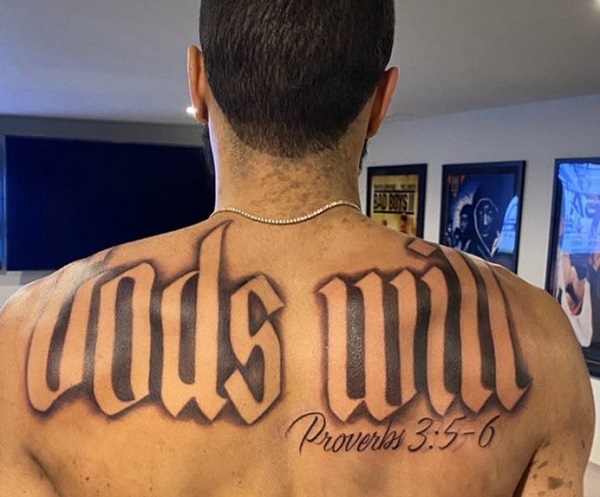 Tatum, who had 28 points and 11 rebounds in Boston’s 127-117 win, appeared to have a wrap covering what looked like fresh ink across his back:

Looks like Tatum had himself a time down at All-Star weekend with a MASSIVE new back tattoo. #boston #celtics #nba pic.twitter.com/oYACKPW61h

Yes, Tatum did get a new tattoo. He showed off what the tattoo looked like via his Instagram story. The tattoo says:
“Gods will Proverbs 3:5-6”. There is a grammatical error as the tattoo should have a possessive apostrophe for God’s will, but who are we to talk? He probably didn’t have an Iggy with him when he got it done.

Well that answers the question what Jayson Tatum’s new tattoo looks like … pic.twitter.com/n6P3AfTqyx

The tat is taking up a lot of space. The other thing to notice is that Tatum has a massive torso. Goodness, he has definitely been spending time working out and getting huge. The former No. 3 pick is averaging 22.4 points per game this season. Numerous Kansas City Chiefs fans are celebrating the team’s Super Bowl win with tattoos, and few have been better than the great “Andylorian” tattoo we have seen.

A Chiefs fan named Collin Ferguson got a “The Mandalorian” crossover tattoo that features Chiefs head coach Andy Reid as “The Mandalorian” and Patrick Mahomes as “Baby Yoda” from the Disney+ show. Ferguson’s friend Nate_Mace shared the photo on Twitter:

In honor of the Chiefs Super Bowl win, @Ferguson_Donk got a Mandalorian crossover tattoo pic.twitter.com/f5SDkNj7qZ

Nothing is more 2020 than this. Combining the Chiefs Super Bowl with “The Mandalorian” — it’s a winning pop culture formula.

We have to say, Coach Reid looks like a natural as The Mandalorian. Credit Nathan Blankenship of Exile Tattoo for the work.

Anthony Davis is honoring Kobe Bryant with some permanent ink on his body.

Much like his Los Angeles Lakers teammate LeBron James, Davis got a Black Mamba tattoo to honor Bryant. Both Lakers stars got their tattoos on their thighs and done by the same artist, Vanessa Aurelia.

Anthony Davis also got a tattoo for Kobe. (via @nessaurelia, @antdavis23)

Fans around Los Angeles have been paying respects to Kobe by leaving notes, flowers and messages around Staples Center. Many fans are also getting tattoos to honor the legend, who died in a helicopter crash on Sunday that killed nine people. Even numerous players are getting tattoos too as they cope with the death.