Texas Tech fans stormed the field following their team’s upset win over rival Texas on Saturday, and police are now looking for one individual who engaged in what the school called “unacceptable” behavior.

A video that went viral on social media showed a Texas Tech fan aggressively shoving a Texas player in the back as the player was walking off the field. The shove was totally unprovoked and seemed to send the Texas player flying.

Texas Tech issued a statement on Sunday condoning the fan’s actions. The school included a screenshot of the culprit’s face and asked anyone with information to contact the Texas Tech Police Department.

This individual’s actions are not representative of Red Raider values.

If you have any information to help us identify this individual, please contact @TexasTechPD. pic.twitter.com/IGKDxC7JOP

A Texas Tech spokesperson provided me the following statement about the video of a fan pushing a Texas player after Saturday’s game. pic.twitter.com/aQVH290Dp7

This is not the first incident we have seen this season involving a player and a fan who rushed the field. Though, the player was the aggressor the last time (video here). 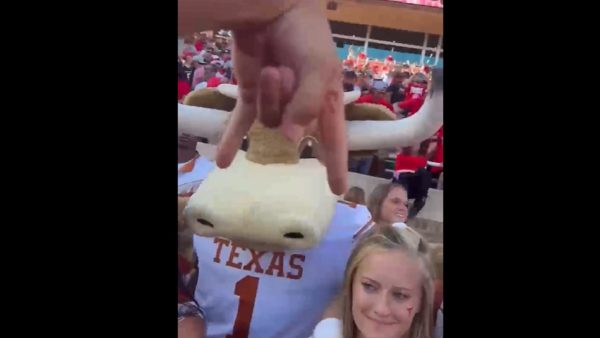 One Texas Tech fan may have delivered the most vicious “Horns Down” gesture ever.

Barstool Sports personality Dana Beers is making trips around the country in search of a college program to support. On Saturday, he visited Lubbock to test out how he would like things if he were a Texas Tech fan. He caught on pretty quickly and seemed to have a blast.

After the Red Raiders beat the Longhorns 37-34 in overtime, Beers hopped onto the field like many other fans. But Beers went straight for where Texas’ mascot Bevo was and delivered a savage Horns Down in front of the mascot’s face.

The reaction from the cheerleader who looked at him like he was crazy was great.

Beers still has several more college spots to visit before announcing his decision on Nov. 21. Texas Tech has to have moved up the list to No. 1 after Saturday’s experience. Tuesday night’s game between Texas and Texas Tech is going to be off the charts with energy.

Texas Tech fans are still bitter and angry with coach Chris Beard for leaving them to take the head coach job at Texas. The two teams are meeting in Lubbock on Tuesday night for the first time since Beard left the Longhorns.

Not only did Red Raiders fans begin camping outside the arena three days ahead of the game, but they also began the trash talk to their opponents on Monday night.

A video showed Texas Tech fans had tracked down the Texas bus upon its arrival in Lubbock. The fans taunted Beard with middle fingers and other gestures:

In case you weren’t sure how these Texas Tech students feel about Chris Beard.

Yep, that’s him in the front seat of the bus. pic.twitter.com/QOJuzV6EPB

A couple of angles on the “gathering” outside the arena. This is the top of the ramp outside the tunnel where the Texas bus was parked. The bus was parked on the side when the team went inside to practice, then the students followed the bus around to the ramp to block the exit. pic.twitter.com/1Et2QVoNHN

The fans who are known for throwing tortillas on the court may have much more in store for Tuesday if this was only a preview. They got warnings at football games in the fall. They probably are prepared for much more on Tuesday night.

Before leaving for the Texas job, Beard spend five seasons at Texas Tech. He helped the Red Raiders reach the NCAA Tournament three times, including a championship game appearance in 2019. As you can see, Texas Tech fans were not happy to see him go, much less to go coach a rival. There are fewer hot-ticket items in Texas than the upcoming game on Tuesday between Texas Tech and Texas.

Both Texas and Texas Tech are 16-5, and they share one big thing in common: Chris Beard.

Beard is in his first season as Texas’ head coach after spending the last five seasons at Texas Tech. He helped Texas Tech reach the NCAA Tournament three times, including a championship game appearance in 2019.

Inspired partially by Beard’s success, Red Raiders fans are extremely passionate about their basketball team and looking forward to Tuesday’s game. Some students are already camping out three days in advance of the game.

#TexasTech students have started camping out for the Texas game on Tuesday night. Line is about 100 people long….72 hours before the game. Unreal. pic.twitter.com/nPndwzOUMH

and so it begins pic.twitter.com/E7sG5G7d51

That is dedication. Getting the tents set up days in advance of a big game? You really only see that in college basketball.

Both teams won on Saturday and have identical records, including in Big 12 play. That should only make things more exciting.

Texas Tech fans get warning for second week in a row Texas Tech fans got warned for the second week in a row over their behavior.

Last weekend, Texas Tech beat Iowa State 41-38 on a 62-yard field goal. During the fourth quarter of the game at Jones AT&T Stadium, Red Raiders’ fans were told to clear out of two sections. The fans were told to move due to their behavior, which included throwing things on the field.

During Saturday’s home game against Oklahoma State, it was more of the same. Fans started throwing items onto the field as the Red Raiders were losing 16-0 to the Cowboys. They ended up getting warned and threatened that another thrown object would result in a 15-yard penalty.

PA just warned fans that the next item thrown on the field will be a 15-yard penalty on Texas Tech.

Looks like some stuff — not tortillas — is being thrown onto the field. Saw a can for sure. #OKState

This sort of behavior is nothing new for Texas Tech fans, who have been throwing things onto the field for a while. They should limit their throwing to tortillas and nothing more. Chris Beard made good on a year-old wedding promise for some fans.

In August, a Texas Tech fan named Rylee Albracht asked Beard how many retweets she would need for him to officiate her wedding.

Hey @CoachBeardTTU , how many retweets for you to officiate my wedding?

Beard responded and said that if the student section were completely full for the team’s opener on Nov. 5, he would be at the wedding and provide Whataburger for everyone there.

Our first game of the season is Tues November 5. If the student section is 100% filled with 4500 students, I will be at your wedding and will provide Whataburger for everyone there.#4:1 https://t.co/Z6hx1xGLRp

The fans held up their end, which led Beard to recognize he would be going to the wedding.

"Looks like I'll be going to a wedding here this summer."

Fast forward to Friday, and Beard shared photos on Twitter that showed him with the wedding party on Texas Tech’s football field.

Promise kept. Congrats Justin & Rylee on your wedding. Hope you enjoy the @whataburger #4to1 pic.twitter.com/3AkLYMFexC

According to Albracht, Beard joined them for her rehearsal dinner and will be providing Whataburger to end the wedding on Saturday.

A man of his word! Thank you @CoachBeardTTU & Randi for joining us at our rehearsal dinner tonight! The @Whataburger will be the perfect end to our big day tomorrow! https://t.co/oxhKTWzOW7

Beard, 47, has been at Texas Tech for four seasons. He took the Red Raiders to the Elite Eight in his second season and to the national championship game in 2019, racking up the bonuses along the way. Now he’s racking up major points with the fans.

Texas Tech clearing scooters from streets ahead of championship game The Texas Tech Red Raiders are taking every precaution available ahead of Monday night’s National Championship game, and that includes pulling the scooters off the streets.

The school offers a fleet of Lime Scooters available for use, but in the wild celebrations following the Red Raiders’ Final Four win, several of them were set on fire.

THERE IS A PILE OF LIME SCOOTERS ON FIRE. Hearing the couch was torched, too. LPD has ordered he crowd to disband, but there are still a ton of people out here. pic.twitter.com/JaT8TIcXZ6

The school is making sure that doesn’t happen again. Line announced Monday that, in consultation with Texas Tech, they’ll be pulling their fleet of scooters off the street Monday night.

Statement from Lime Scooters: "While we too are excited and proud of Texas Tech's victory and tournament run, we also share the city of Lubbock's concern for public safety. In anticipation of tonight's big game, we have pulled our fleet from the streets before it commences,

It’s not quite greased poles, but you have to be prepared for these sorts of things. This is Texas Tech’s first Final Four, so Saturday night was a tough lesson that they don’t intend to repeat. Texas Tech fans have no love lost for Baker Mayfield.

Mayfield was once a quarterback for Tech, but after having scholarship and other issues with the Red Raiders, he walked on to the program at Oklahoma. Mayfield became a star for the Sooners in 2015 and is having a pretty good 2016 season as well.

In fact, Mayfield’s Sooners and Texas Tech combined to set many NCAA records in Saturday’s 66-59 shootout in Lubbock, which was won by Oklahoma. Mayfield was a star in the game, throwing for 545 yards and seven touchdowns, but Tech fans did not treat him kindly.

They taunted him with curse words:

And they threw things at him and his teammates:

The hostility makes sense given that Mayfield is the one who got away. Tommy Tuberville left Texas Tech for Cincinnati in December, and Red Raiders fans aren’t about to forget about the way he made his exit.

Texas Tech fan site Viva The Matadors tossed around an idea Wednesday morning to send a fax to Tuberville’s football office at Cincinnati to tweak the coach about leaving Lubbock. What was their idea? To fax the menu from 50 Yard Line Steakhouse, which was the restaurant where Tuberville supposedly ditched the recruits.

One fan actually went through with the idea. Here’s what the cover sheet stated and looked like:

To: Tommy Tuberville and staff.

MEMO Was thinking of you. . . We will miss you . . . Here is an intent letter to remember us by

Below you can see the cover sheet and menu they faxed: