NBA players react on Twitter to ‘The Last Dance’ documentary 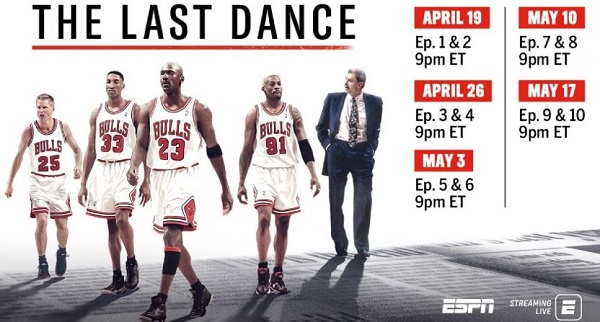 ESPN on Sunday night aired the first two parts of “The Last Dance,” a 10-part series about the 1997-1998 Chicago Bulls that has been heavily anticipated.

After over a month of quarantine and no pro sports, fans have been starved for new sports content and got that in the form of the documentary. And while some of the stories were ones older sports fans were familiar with, there were tons of new and fresh interviews, sound bites, and footage all compiled to make an enjoyable viewing experience. Plenty of athletes loved watching it too.

Numerous current and former NBA players shared their thoughts on the first two parts of the documentary via Twitter. Here are some of the reactions.

END_OF_DOCUMENT_TOKEN_TO_BE_REPLACED The Chicago Bulls were not a very good franchise before Michael Jordan got there, and if you hear about the things going on with the roster, you’ll understand why.

During episode 1 of “The Last Dance,” which is the ESPN documentary series about the 1997-1998 Chicago Bulls, Jordan was asked about the drugs and partying that went on within the franchise. An article described it as a “cocaine circus”, which made Jordan laugh.

Jordan says the partying was unlike anything he had seen before, and he was not a part of it.

“Look, guys were doing things that I didn’t see,” Jordan recalled. “I had one event, preseason, I think we were in Peoria. It was in the hotel, so I’m trying to find my teammates. I started knocking on doors. I get to this one door, and I knock on the door and I can hear someone says, ‘Shh shh shh, someone’s outside.’ And then you hear this deep voice say, ‘Who is it?’ I say, ‘MJ.’ And then they all say, ‘aw f–k, he’s just a rookie, don’t worry about it.’ So they open up the door, I walk in and practically the whole team was in there. And it was like, things I’ve never seen in my life as a young kid. You got your lines over here, your weed smokers over here, you’ve got your women over here. So, the first thing I said, ‘Look, man, I’m out.’ Cause all I can about think is, if they come and raid this place right about now, I am just as guilty as everyone else that’s in this room. And from that point on, I was more or less on my
own.”

Jordan averaged 28.2 points per game as a rookie with the Bulls and led them to the playoffs, where they lost in the first round. He took some time to pull the franchise forward, as it wasn’t until his fourth season that they won a playoff series. The partying by the players going into things probably didn’t help. And if their partying sounds bad, read about what the Mavericks were doing before Mark Cuban bought them.

Michael Jordan talks about walking in on Bulls cocaine party as a rookie #TheLastDance pic.twitter.com/rA0RTb2wrY

ESPN will be airing a documentary about Michael Jordan and the 1990s Chicago Bulls called “The Last Dance” that has been widely anticipated by sports fans. Fans crave as much information and footage possible of MJ and his Bulls teams, and the 10-part series, which begins airing on April 19, will give fans a close look at what made the 6-time champion tick. And according to MJ, some people may not like what they see.

Jason Hehir, who directed the series, spoke with The Athletic’s Richard Deitsch for an interview about the series. Hehir says Jordan told him many people would not like what they saw and view MJ as a “horrible guy”. The reason? MJ pushed his teammates so much at times that he came across as mean. Jordan is aware of that.

Here is what Hehir says Jordan told him when they met about the project in 2017.

“When people see this footage I’m not sure they’re going to be able to understand why I was so intense, why I did the things I did, why I acted the way I acted, and why I said the things I said,” Hehir says Jordan told him. “When you see the footage of [me riding with Scotty Burrell], you’re going to think that I’m a horrible guy. But you have to realize that the reason why I was treating him like that is because I needed him to be tough in the playoffs and we’re facing the Indianas and Miamis and New Yorks in the Eastern Conference. He needed to be tough and I needed to know that I could count on him. And those are the kind of things where people see me acting the way I acted in practice, they’re not going to understand it.”

Jordan believes that being a jerk is sometimes the price of winning and leading.

“Look, winning has a price. And leadership has a price. So I pulled people along when they didn’t want to be pulled,” Jordan said in one of the series episodes. “I challenged people when they didn’t want to be challenged. And I earned that right because my teammates who came after me didn’t endure all the things that I endured. Once you joined the team, you lived at a certain standard that I played the game. And I wasn’t going to take any less. Now if that means I had to go in there and get in your ass a little bit, then I did that. You ask all my teammates. The one thing about Michael Jordan was he never asked me to do something that he didn’t f–king do. When people see this they are going say, ‘Well he wasn’t really a nice guy. He may have been a tyrant.’ Well, that’s you. Because you never won anything. I wanted to win, but I wanted them to win to be a part of that as well. Look, I don’t have to do this. I am only doing it because it is who I am. That’s how I played the game. That was my mentality. If you don’t want to play that way, don’t play that way.”

Indeed, MJ’s warning to fans is not surprising. The six-time NBA champion delivered a Hall of Fame speech that was soaked with bitterness. He’s also made headlines for undercutting current players.

Jordan, 57, never gave an inch as a player and still holds the same mentality. It’s what helped make him great, but he’s not going to win any awards for friendliness.

ESPN is coming through for the people.

The network has bumped up the release date for “The Last Dance” to April 19, the New York Post’s Andrew Marchand reported on Monday night. “The Last Dance” is a 10-part documentary series about Michael Jordan and the Chicago Bulls.

Marchand says the announcement will be made official on “GMA” Tuesday.

The documentary was originally set to be released in June, but there have been calls across social media for ESPN to bump up the release date to help satisfy the needs of sports fans.

This is welcome programming for sports fans, but I do have one complaint: why do it during the same time as the NFL Draft, which is April 23-25? Why not before or after? Hopefully they will stagger the schedule around the draft and spread things around for fans.