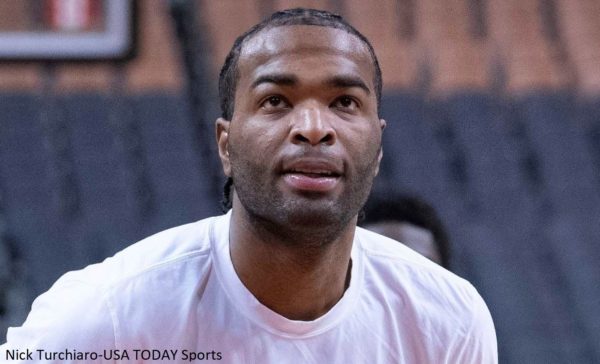 TJ Warren is putting to rest any rumors suggesting that he wants to knuckle up with Nate Bjorkgren.

During his exit interview Saturday, the Indiana Pacers forward sounded off on a recent report claiming he has issues with the Pacers coach Bjorkgren.

“That was ridiculous,” said Warren, per J. Michael of the Indianapolis Star. “Seeing those reports was really really terrible. Nate has been nothing but a great guy. Hard-working loving man … It wasn’t fair to him.”

The report in question last month was pretty explosive. It claimed that Warren demanded a trade from the Pacers because of Bjorkgren and may have even opted for season-ending surgery to avoid playing for Bjorkgren.

Warren’s camp was pretty quick to refute the report though. Now Warren himself, who will be entering a contract year in 2021-22, is doing so too.

TJ Warren’s camp appears to be refuting recent rumors about his supposed unhappiness with the Indiana Pacers.

Pacers insider J. Michael of The Indianapolis Star reported this weekend that Warren does not want to go anywhere. Michael adds that Warren likes the small market and the plans for him in Indiana no matter who the head coach is.

The 27-year-old forward Warren is under contract for $12.7 million next season. A report earlier this week claimed Warren had requested a trade because of Pacers coach Nate Bjorkgren. It even alleged Warren may have gotten season-ending foot surgery in part to avoid playing for Bjorkgren.

In the Orlando bubble last season, Warren showcased his 20-plus-point-per-game upside as a No. 1 scoring option. He likely would not be able to get that opportunity on many other teams. That is why the Pacers still seem to make the most sense for him, especially in an upcoming contract year.

Nate Bjorkgren seems all but doomed as Indiana Pacers head coach, and one of his star players would apparently like to see him pack his bags as well.

Fischer adds that Warren’s representation has denied that he made such a request. But Warren has been out since December after undergoing season-ending foot surgery. The report originally stated that Warren was believed to have opted for the procedure in part to avoid playing for Bjorkgren.

Warren did respond to the report on Twitter, saying, “Don’t use me to push false narratives.”

Don’t use me to push false narratives

The first-year head coach Bjorkgren is quickly losing his grasp on the Pacers. They are barely in play-in territory right now at 30-35. Bjorkgren now looks likely to be fired after the season. Fischer notes that Pacers executives Kevin Pritchard and Chad Buchanan may be in jeopardy too due to Bjorkgren’s struggles. Bjorkgren’s abrasive approach with both players and staff is cited as a major point of contention.

As for Warren, his voice definitely matters. He was Indiana’s breakout star of the Orlando bubble and may be the best pure scorer on their roster. But using surgery to avoid playing sounds like something straight out of Kyrie Irving’s playbook.

Kendrick Nunn is having fun at the expense of his team’s vanquished foes.

The Miami Heat guard wished Jimmy Butler a happy birthday Monday with a funny post on Instagram. The post was a Photoshopped image depicting Butler with Giannis Antetokounmpo and TJ Warren as his children.

The Heat, led by Butler’s excellent two-way play, toppled Warren and the Indiana Pacers in the first round. They then took down Antetokounmpo and the Milwaukee Bucks in the second round. Miami begins their Eastern Conference Finals series against the Boston Celtics on Tuesday.

While Nunn’s post was pretty funny, he may want to tread lightly here. After all, the Heat could be targeting Antetokounmpo as a free agent in the future.

Jimmy Butler says beef with TJ Warren is over

Anyone looking forward to a renewal of the rivalry between Jimmy Butler and T.J. Warren in the upcoming playoff series between the Miami Heat and Indiana Pacers may be disappointed.

Butler and Warren exchanged harsh words after a January altercation, but seven months later, Butler says that’s all in the past and won’t be a factor in the upcoming Eastern Conference quarterfinal.

Jimmy Butler, on hype vs. T.J. Warren, "We can kill that. That's something of the past."

Butler famously ripped into Warren following an on-court altercation in January. There was very real excitement about a sequel when it was revealed that the two would face each other twice during the bubble seeding games, but the first matchup went off without a hitch and both players were rested during their second game.

A competitive playoff series may change Butler’s tune, but for now, it sounds like it’s going to be peaceful between the two stars. We will see if that holds once the games start. END_OF_DOCUMENT_TOKEN_TO_BE_REPLACED

T.J. Warren has been one of the best stories of the NBA restart in Orlando, and he’s doing it despite some foot issues.

Warren played through a foot issue during Indiana’s loss to Miami on Monday. He was ruled out for the team’s game on Wednesday against Houston due to his foot.

The good news for Pacers fans is that ESPN’s Tim MacMahon says Warren’s injury is not considered serious.

Warren likely will not play on Friday, which is Indiana’s final game before the playoffs begin. However, both MacMahon and Indianapolis Star reporter J. Michael say Warren should be available for the playoffs.

The 26-year-old guard was acquired by Indiana in a trade with Phoenix last year. He opened up the restart with a 53-point game and has had three other games since of at least 32 points. He’s averaging 19.8 points per game so far this season.

The brouhaha between Jimmy Butler and TJ Warren seems like it happened years ago, but fortunately we could be getting a second helping in Orlando.

As part of the NBA’s seeding game schedule release for the planned restart of play in late July, it was revealed that the Miami Heat would play the Indiana Pacers twice in one week, bringing Butler and Warren back together. Retired Heat star Dwyane Wade took to Twitter Saturday to express his excitement.

In case you forgot, Butler and Warren got into an altercation when they last met in January, resulting in Warren being ejected. After the game, Butler called Warren “soft” and “trash,” saying that Warren could not guard him.

Wade, Butler’s close friend, former Chicago Bulls teammate, and successor as the star player of the Heat, will obviously be rooting for Butler in Round 2. The rest of us will be able to watch the beef unfold for ourselves as well when Miami and Indiana have their scheduled meetings on Aug. 10 and 14.

Jimmy Butler rips ‘soft’ TJ Warren after altercation: ‘He’s not in my league’

Jimmy Butler did not hold back one bit about his disdain for TJ Warren after the two of them got into it during Wednesday’s game.

In the third quarter of the Miami Heat’s 122-108 win over the Indiana Pacers, Butler and Warren traded words after a hard foul and had to be separated.

Once play resumed, Warren was ejected for taunting Butler following an offensive foul. That led to Butler blowing kisses to Warren, and Warren responding by giving him the middle finger.

Jimmy Butler blows kisses to TJ Warren after getting him ejected pic.twitter.com/BOLudjTeCG

After the game, Butler lit into Warren like a Christmas tree.

“To me, I think it’s tough for him because I can guard him and he can’t guard me,” said Butler, per Ira Winderman of the Sun Sentinel. “Because at the end of the day, that’s what it comes down to. Like I said, I think you just gotta watch your mouth in certain situations. There’s some s— that you just don’t say as a man. He gotta see me the next time because I feel like what he said was truly disrespectful. And it’s all good cuz we see him again.

“I ain’t scared of nobody,” Butler continued. “So he talking about, ‘We gonna fight,’ this, that, this, that. It is what it is … He’s soft, he’s soft, he’s not even in my f—ing league. Like, nowhere near me. If I was their coach, I would never put him on me ever again. Like, no. Put somebody else on me because I’m gonna tear his a– up every time … He can’t do nothing with me. Like when I say that he’s trash, I mean that. He’s not in my league. I take it as disrespect if you ever put him on me.”

The Heat next play the Pacers on Mar. 20 in Miami, but for now, it looks like Butler did Warren even dirtier than he did Trae Young.