Memphis Grizzlies guard Tony Allen was unhappy with a foul call on Monday night, so he decided to take it out on a cameraman.

After Allen fouled New Orleans Pelicans center Omer Asik, he walked over to photographer Bo Bradley, who was sitting under the basket, and yelled “Why?!” into his camera. He then smacked the camera, apparently causing some part of it to hit Bradley in the face.

Allen is a passionate player, but there’s no need for that. Fortunately, he apologized and Bradley brushed it off.

@RickTrotter @matt_winer I apologized and it was definitely out of character, however, is that all he got out that GAME. …..

Making a mtn out of a molehill! TA apologized on the crt & in a DM!! Much bigger things happened at this game! #gogriz #4-0 #defenseWgames

The “he” that Allen was referring to in his tweet was NBA reporter Matt Winer, who tweeted that Allen should be fined.

Good on Bradley for not being dramatic about it since he didn’t get hurt, but that was completely uncalled for. Allen needs to do a better job of controlling his emotions. Memphis Grizzlies guard Tony Allen was ejected from Monday night’s game against the Los Angeles Clippers after being called for a Flagrant 2 foul. This wasn’t just any hard foul. Allen literally kicked Chris Paul in the face.

Paul drove through the paint late in the first quarter and caught Allen off guard with a head fake. Allen then spread his arms and legs to try to fill the passing lanes. In the process, he lifted his left leg in the air and booted CP3 in the face. The officials initially called Allen for a Flagrant 1 but upgraded it to a Flagrant 2 after watching the replay. The veteran guard apologized for the kick after the game.

It would be hard to believe that Allen actually meant to kick Paul in the face. I highly doubt he did, but throwing his leg up like that was dangerous. That’s why he was thrown out of the game. 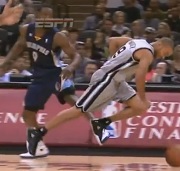 Competitive instinct seemed to take over for Tony Allen during Game 1 of the Western Conference finals between the Memphis Grizzlies and San Antonio Spurs on Sunday.

Early in the third quarter, Spurs point guard Tony Parker rebounded a Mike Conley miss and was off and running in transition. He took the ball up by the sidelines and did a spin move around Allen, but Allen stuck out his foot and tripped Parker. The two quickly made up and Parker seemed to be a good sport about it, while Allen apologized.

Allen didn’t appear to have any malice with his act — it seemed like he was just trying to stop Parker out of instinct — but tripping a guy like that can be dangerous.

Parker played extremely well during the game. He went 9-of-14 for 20 points and nine assists in San Antonio’s blowout 105-83 win. They were ahead by so much that Tracy McGrady even registered seven minutes, though he did not score. Kawhi Leonard went 4-of-5 on 3-pointers, Matt Bonner was 4-of-6, and Danny Green was 3-for-5. They shot 48.3 percent on their threes. You’re not going to beat the Spurs when they’re making that many outside shots. Memphis Grizzlies guard Tony Allen was on the bench for a breather during the third quarter of Game 5 between the Grizzlies and Oklahoma City Thunder, but that didn’t stop him from trying to defend his opponents. As Derek Fisher was spotting up for an open 3-pointer, Allen threw a shirt onto the court (or it slipped out while he was waving his shirt). Though Fisher missed the shot, the referees gave OKC credit for the basket because of Allen’s interference. Allen also got a technical foul for the shirt throw. Kevin Durant made the foul shot to give the Thunder a 4-point play, making the score 60-53 Memphis.

Here’s a look at the shirt throw in GIF form:

END_OF_DOCUMENT_TOKEN_TO_BE_REPLACED

NBA referee David Guthrie took a spill during the third quarter of Game 2 between the Los Angeles Clippers and Memphis Grizzlies on Monday night at Staples Center. Guthrie was backing up and did not notice Grizzlies guard Tony Allen sitting on the ground behind him. He tripped over and fell, but luckily he was not injured.

Blake Griffin did not receive the foul call he was looking for on the play and seemed to point at Guthrie as a way of saying the ref’s fall was karma for not calling a foul.

Below is a look at the tumble in GIF form:

END_OF_DOCUMENT_TOKEN_TO_BE_REPLACED Tony Allen’s heart was in the right place when he held a karaoke fundraiser on Tuesday, but his singing skills were on a different planet.

The Grizzlies guard held his “Tony Allen Karaoke Night” at the Kroc Center in Memphis Tuesday to benefit the Juvenile Intervention and Faith-Based Follow-Up. Allen met with fans, signed autographs, and, of course, he sang karaoke.

And, boy, was he terrible.

Allen attempted to sing the 1990s Montell Jordan hit song “This is how we do it,” but he stumbled his way through most of the song and didn’t really know the words. Keep in mind, this is a song with more simplistic lyrics than Aldous Snow’s “African Child.” At least Allen got the chorus right … some of the time.

At about the 1:40 mark, he completely loses his way with the song. Even Brennan Huff was better singing it.

In the video below, he sings “Rock with u,” and he does much better. Even though we’re giving him a hard time for his performance on the Montell Jordan song, what really matters is that his heart was in the right place with the fundraiser.

END_OF_DOCUMENT_TOKEN_TO_BE_REPLACED

The lockout may be tougher for some players than it is for others, but if the rest of us can afford to give out candy on Halloween I think professional athletes should be able to.  Players are certainly missing out on a few bucks now that games have officially been cancelled, but I wouldn’t exactly say David Stern is the Grinch who stole Halloween.  According to Tony Allen and his collection of Ramen Noodles, the lockout put a damper on trick-or-treating.

As Funny Athlete Tweets pointed out, the following picture accompanied tweets that read “Sorry kids its a lockout no candy!!…” and “Its the thought that count!!” on Halloween from Allen’s account. If college kids were trick-or-treating in Tony’s neighborhood, his house would probably be a top priority.  We won’t call handing out Ramen Noodles to kids on Halloween cruel, simply because we don’t believe he actually did it.  The lockout may have people moving back home to live with their parents or getting a job at a furniture store, but it can’t be this bad.  Allen has to be joking, right?  Assuming he was, he must eat a lot of Ramen Noodles.

H/T to SI Hot Clicks for the story.